“The industry’s nature is such that due to circumstances concerning the product and customer, further information about the customer will not be announced,” says the company. 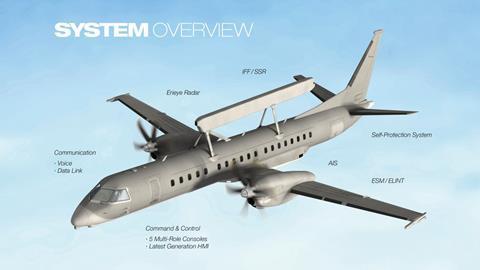 Saab notes that the aircraft can perform multiple missions and comes with a range of sensors, including its Erieye airborne radar.

The Pakistan military’s yearbook for 2017-2018 disclosed that Islamabad also obtained three baseline Saab 2000s for a total cost of $9.3 million.

In its annual yearbook for 2017-2018, the Pakistan Ministry of Defence Production (MoDP) confirmed that the Pakistan Air Force (PAF) took delivery of its sixth Saab 2000-based Erieye airborne early warning and control (AEW&C) aircraft. The Directorate General of Defence Purchase (DGDP) ordered the sixth Erieye AEW&C from Saab for $94.95 million US in 2017-2018.[1]

Public export-import registries indicated that the PAF started implementing the follow-on Erieye program in April 2018, with deliveries concluding in April 2019. It appears that the additional Erieye AEW&C aircraft were integrated to three Saab 2000s procured from Skyworld Aviation in November 2018. In any case, the MoDP has basically confirmed that the PAF now operates six Erieye AEW&C aircraft.
Click to expand... In its annual yearbook for 2017-2018, the Pakistan Ministry of Defence Production (MoDP) confirmed that the Pakistan Air Force (PAF) took delivery of its sixth Saab 2000-based Erieye airborne early wa...

Jack of all trades, master of none: PAF gets 4th AWACS, IAF none since Balakot
Pakistan Air Force (PAF) last month took delivery of one more Saab 2000 Erieye AEW&C aircraft, which is fourth Saab 2000 Erieye AEW&C aircraft which PAF has inducted Since 2019 Balakot airstrike was conducted by Indian Air Force (IAF), arch-rival PAF now has a fleet of Seven Saab 2000 Erieye AEW&C aircraft and four Shaanxi ZDK-03 Karakoram Eagle Airborne Early Warning and Control System which takes total to 11 Airborne Eye in the Sky of the rival airforce while IAF fleet still stands at 5. IAF operates 2 DRDO developed Embraer mounted Netra AEW&C and three Phalcon AWACS mounted on IL-76 aircraft. IAF has plans to induct 2 Phalcon AWACS mounted on IL-76 aircraft and in the next 10 years has plans to induct Six Airbus A330 AWACS based on DRDO’s Netra technology on rotodome 360-degree coverage and Five C295 Netra AEW&C with its side-looking 240-degree coverage beam radar. IAF Think Tank have recommended mix-fleet of 20 AWACS and AEW&C platforms for the Two front war and to have larger fleet availability even at peace times for Surveillance flights but the slow pace of procurement is hampering fleet expansion and there seems to be no urgency at fast-tracking of platforms for both Netra and AWACs India programs.

Jack of all trades, master of none: PAF gets 4th AWACS, IAF none since Balakot – Indian Defence Research Wing

idrw.org
You must log in or register to reply here.
Similar threads
Indians bought 17 lakh more Chinese phones this October than October 2019 despite Galwan
SOUTH KOREA : ‘The U.S. Is No Longer a More “Developed” Country Than Us’
Legend SPB no more.
Pakistan reaches out to China for more fighters and missiles
Share:
Facebook Twitter Reddit WhatsApp Link