In what some might consider a terrifying development, the U.S. military has passed a key milestone in creating self-steering bullets.


Military snipers are often faced with having to hit moving targets in difficult conditions, such as high winds or dusty terrain like that found in Afghanistan. DARPA's Extreme Accuracy Tasked Ordnance (EXACTO) program was designed to increase snipers' accuracy in these situations, by improving their range and reducing the time required to hit a target.


A video released by DARPA shows how the system uses real-time optical guidance to steer the ammunition to a moving or accelerating target, regardless of weather and other forms of interference.


In the video, an expert shooter fires at a moving target, and the self-steering bullet corrects its course to hit the target. Then, an untrained person who has never used a sniper rifle before takes aim at the moving target and the bullet still finds its mark.


"True to DARPA’s mission, EXACTO has demonstrated what was once thought impossible: the continuous guidance of a small-caliber bullet to target," DARPA Program Manager Jerome Dunn said in a statement. "This live-fire demonstration from a standard rifle showed that EXACTO is able to hit moving and evading targets with extreme accuracy at sniper ranges unachievable with traditional rounds."


Dunn added that achieving the self-steering capabilities with a small, .50-caliber weapon was a "major breakthrough," which would make it possible to expand the system to all calibers.
http://www.livescience.com/50648-darpa-self-steering-bullets.html

Lego-style armor blocks for reinforcing positions. Sustains fire from all small arms, including 14.5mm, each one weights around 75kg.

Lego-style armor blocks for reinforcing positions. Sustains fire from all small arms, including 14.5mm, each one weights around 75kg.
Click to expand...

which company did this product belong?
B


Russian RPG-32 "HASHIM" - pierce armor grenade meter, then it is not really until recently could not even say looking into military manuals, but now they are rewritten. A new generation of Russian grenade launchers that's on the shoulder, and the system continues to be refined, tested under full load took place in the deserts of Jordan, where the super modern grenade was so successful that the light feed Jordanian king even received a proper name for the divine Muslims.

The newest RPG-32 "HASHIM" created for the 21st century soldier on the battlefield who need a versatile and reusable system, so far, no one other than the weapon developed in the sixty-first year, the RPG-7 did not meet these requirements, he now has a reliable replacement. Today it is one iza most powerful rocket-propelled grenades in the world, breaks puff armor one meter, it is enough to hit virtually any existing tanks.
Depending on the type of target can be equipped with bullets of various calibers - 72.5 or 105 mm type warhead and cost. The same for all rounds is a trigger length of 36 centimeters and a weight of 3 kilograms, including the optical sight, hosted in the service inside the circulation starting device.
Jordan's King Abdallah second was directly involved in the development of requirements for the new grenade launcher, in fact a system made by order of the Middle Eastern side, where it passed rigorous testing - shooting at tanks, armored vehicles, and reinforced concrete structures, the hit could not stand no obstacle, and the grenade did not give any a single misfire The Army Is Getting a New Gun: Everything We Know About the M17 Pistol When it comes to fast-evolving tactics now used in close-quarter combat, something with which Army soldiers fighting in Iraq and Afghanistan now have more than a decade of experience, an ability to maneuver with increased lethality in caves, tunnels, crawl spaces, attics or buildings allows soldiers to access life-impacting firepower more effectively - especially in “tight quarters” situations where a longer, larger rifle may not be available for use.
Click to expand...

“You can close with the enemy in close quarter combat and engage the enemy with one hand. It is tough to do this with the M9,” said Lt. Col. Martin O’Donnell, spokesman for the 101st Airborne.
Click to expand...

The new pistol is built with a more ergonomic configuration to better accommodate the widest possible range of hand grip techniques for soldiers and enable rapid hand switching as needed in combat. The M17 is said by developers to bring much tighter dispersion, improved versatility and next-generation accuracy.
Click to expand...

“With this weapon, you can change quickly from right hand to left hand. If you are shooting something that is not comfortable on your hand and can't get a comfortable grip, it is not as accurate,” said Sgt. 1st Class Andrew Flynn, 101st Division Master Gunner.
Click to expand...

The new handguns are built with an external safety, self-illuminating sights for low-light conditions, an integrated rail for attaching enablers and an Army standard suppressor conversion kit to attach an acoustic/flash suppressor, service developers said.
Click to expand...

The M17 and M18 pistols are manufactured by Sig Sauer, who earned the $580 million contract to produce the weapons in January of this year.
Click to expand...

Several paragraphs in this article are repetitive.

Special Operators Are Eying Sig Sauer .338 Machine Gun To Solve A Number Of Problems
https://www.thedrive.com/the-war-zo...his-machine-gun-to-solve-a-number-of-problems
A


Indian Army Major Develops World's 1st Bulletproof Helmet Against AK-47 Bullets
The officer had got into the development of bulletproof jackets after he had received gunshots on his vintage bulletproof jacket.
All India ANI
Updated : February 07, 2020 08:36 pm IST 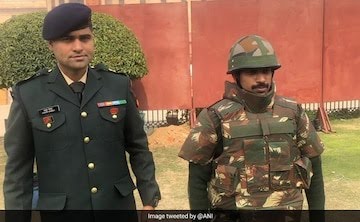 Major Anoop Mishra is part of the Army's College of Military EngineeringLucknow:
An Indian Army Major who had developed a bulletproof jacket for protection against sniper bullets, has now developed a helmet which is claimed to be first such in the world that can stop an AK-47 bullet round from a distance of 10 meters.

"The ballistic helmet has been developed under project Abhedya by Major Anoop Mishra who has also developed a full-body protection bulletproof jacket which can withstand even sniper rifles," Army officials told news agency ANI.

Along with this, Indian Army's College of Military Engineering jointly with a private firm has developed India's first and world's cheapest gunshot locator. It can locate the exact location of the bullet from distance of 400 meters which will help to locate and neutralise terrorists faster.

"During 2016-17, 50,000 bulletproof jackets had been procured for Indian Army through Revenue route. The Contract for procurement of 1,86,138 BPJs through Capital route, under Buy (Indian) category, has been concluded in April 2018. Further, a contract for procurement of 1,58,279 Ballistic Helmet through Capital route had been concluded in December 2016," the then Minister of State for Defence, Subhash Bhamre had informed Lok Sabha in a written reply in July 2018.

The College of Military Engineering (CME) at Pune, a premier tactical & Technical training institution is the alma mater of the Corps of Engineers.

CME is responsible for training of personnel of the Corps of Engineers besides imparting instructions in Combat Engineering, CBRN Protection, Works Services and GIS matters to the personnel of All Arms & Services. 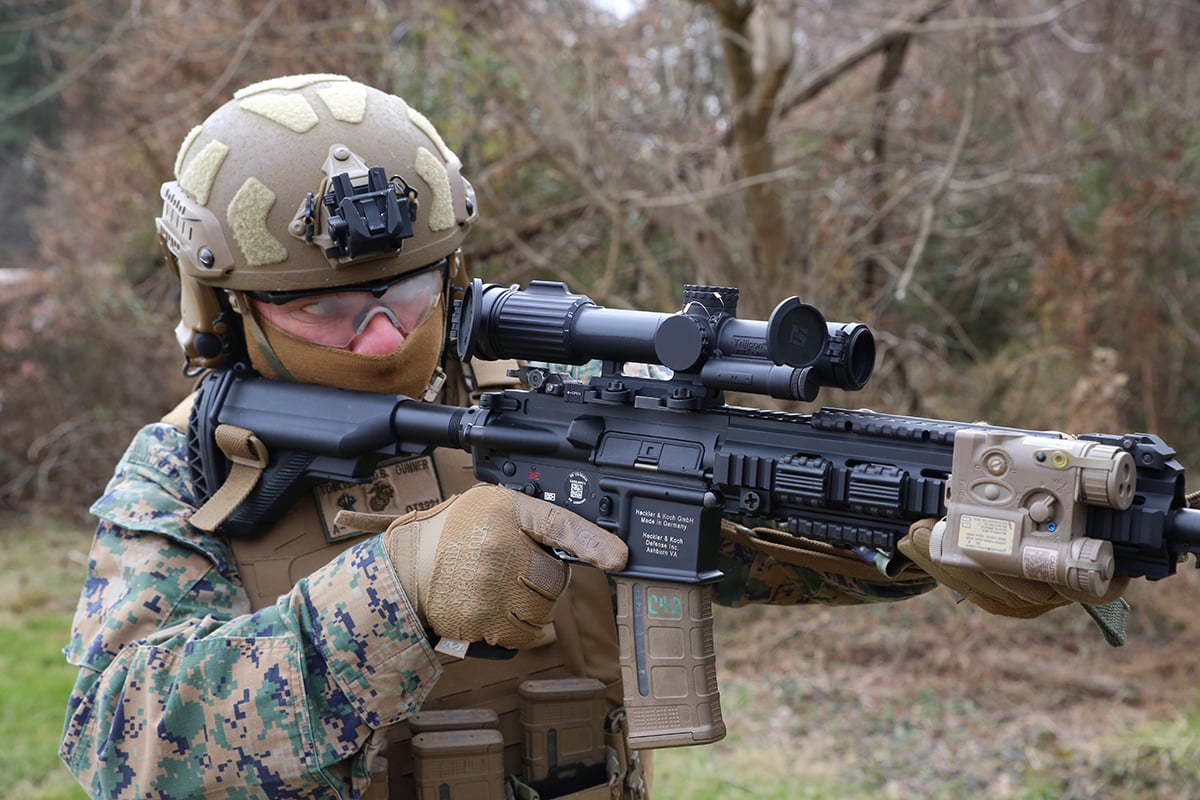 The SCO is basically a Trijicon VCOG 1-8x28 variable-power scope, with the illuminated reticle powered by a single AA battery: