This is a few months old article, but relevant keeping in mind events in India 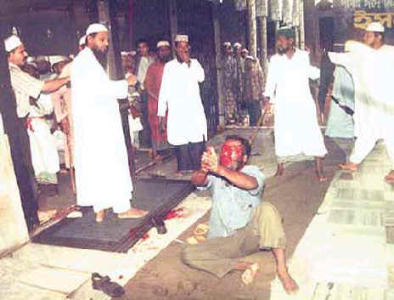 It is now proved that persecution of minority in Bangladesh was just religion cleansing, done with help of the then government to clean away the Hindu, Buddhist and Christians of the county.

The 1st October of 2001 is a black day for the rational people and the minority community of Bangladesh. What has been occurring to the minority community from that day onwards cannot be expressed in words. If we see some portion of the Amnesty International Report, we will be able to understand a little bit of what happened at that time.

In their report, Amnesty International wrote, Amnesty International has been concerned about the situation of the members of the Hindu community in Bangladesh over the past several months. Following the general election on 1st October which was won by a coalition, led by Bangladesh Nationalist Party (BNP) with the large majority, BNP supporters reportedly attacked Hindus because of their perceived support for the rival Awami League party during elections. Hundreds of Hindu families were reportedly driven off their land by groups affiliated to the BNP-led coalition who, in some cases, allegedly burnt their homes and raped Hindu women. Several Hindus were reportedly killed. In this report, amnesty international marked the more affected area, how they are suffering and gave some case history how the women of Hindu community were raped.

One of the affected villages was Ziodhara. Fear of counterattack created a sever atmosphere of tension in the village. Several hundred Hindu villagers left for fear of being attacked and Hindu children would not attend schools

In the village of Daspara in Mithanala union, Mirersarai Upazila, a gang of about 25 youths reportedly attacked homes of Hindus around midnight on 5 November. One person, Sunil Das Shindhu, 28, was reportedly hacked to death and 16 others were injured, some seriously. They ransacked houses, looted them, dragged family members out of their homes and beat them. Police reportedly arrested 12 persons in connection with this attack, but it is not known if they have been charged.'
Click to expand...

Besides that case study, amnesty international also described some case study of rape. The reports told that, Human rights organizations in Bangladesh believe over 100 women may have been subjected to rape. Reports persistently alleged that the perpetrators have mainly members of the BNP or the coalition partner Jamaat-e-Islami. Rape victims are frequently reluctant to disclose their ordeal. What follows is a sample of the available information.

A college student was reportedly raped in front of her mother at her home in Azimnagar, Bhanga, Faridpur. The attackers entered her home on 6 October at about 9pm, ransacked the house, looted valuables and raped the student before leaving the house.

A school girl was reportedly gang-raped in Delue, Ullapara, Sirajganj on 8 October. Attackers entered her home; ill- treated members of her family, took her outside the house and raped her.

The Hindu women were reportedly raped in front of their husbands on 11 October in Khanzapur Upazila in Gournadi, Barisal. The attackers reportedly came at night, knocked at the door, and told the family that they should leave the area because they voted for Awami Leage. They then reportedly tied up the husbands and raped the women.

Two Hindu women were reportedly raped in their home in Bashkandi, chorfashon, Bhola on 6 October. Male members of the family had already gone into hiding for fear of being attacked. The attackers entered their home and raped the girl and her mother.
Click to expand...

These are the partial sketch of incidents, what was committed by the BNP- Jamat in 2001. But it is impossible to find out the whole picture of it. A large number of rape victims have hidden that incident for the social cause. On the other hand the Amnesty International report also said that, a large number of people have left the country and went out to India. However, the present government has published a probe committee report of those massacres. This probe committee was formed as per the direction of the high court. After this government came to power, a legal aid non government organization, Human Rights and Peace for Bangladesh filed a writ petition on 6 may 2009. High court had directed the government to form a judicial probe commission. Government had formed three-member commission headed by retired judge Muhammad Sahabuddin. Commission submitted their report to the home minister on 29 April of this year. Government has formally disclosed it on 1 December 2011.

A massacre or a heavily minority persecution has happened on 1 October 2001 and now it is 2011. Therefore, it happened 10 years before. In the meantime huge amount of water flowed through the Padma and Meghna, but the fate of the minority of Bangladesh did not change a little. Rather reality is that, the home minister of Bangladesh said, if the victims were afraid to file the case, government will file case against them.

The probe commission found the involvement of 26,352 people including 26 minister and lawmakers of the previous Bangladesh nationalist party (BNP) – Jamat alliance government. According to the probe commission the accused six ministers are Ruhul Quddus Talukder Dulu, Abdus Salam Pintu, Motiur Rahaman Nizami, Altaf Hossain Choudhury, Tariqul Islam and Hafizuddin. Altaf Hossain Choudury was the then home minister. It is enough to understand that, when home minister himself is involved or take part in violence then what can happen in a country! Out of six ministers, two are arrested now in another case. Motiur Raman Nizami was arrested as an accused war crime charge and Abdus Salam Pintu was arrested in a grenade attack case. According to the investigation report of that grenade attack case, Abdus Salam Pintu is a leader of Islamic terrorist group. War criminal Motiur Rahaman Nizami is also a leader of Islamic terrorist because all the Islamic terrorist Group of Bangladesh is linked with Jammat or a sister orgnization of Jammat Islami Bangladesh (Jammat). Another War criminal of 1971 is an accused person, he is Salauddin Quader choudhury. He is now in the jail as an accused war criminal. His trial is on going.

So, it is clear that, the war criminal of 1971 and the Islamic terrorist group were involved in persecution of minority in Bangladesh. Basically it was a religion cleansing. They did it in the help of the government and the government administration to cleansing Hindu, Buddhist and Christians of Bangladesh. So, it was not only the cause that victims are the supporter of Awami League but also an extreme fundamentalist thinking worked there. What they started in 1971 by the help of Pakistani ruler, they want to finish their unfinished part through the BNP government.

But now the questions are, how Bangladesh will get rid of this phenomenon? The present government is trying to pull out the nation from that phenomenon. They have started the trial of the war criminal of 1971. They have done a probe commission report of minority cleansing of 2001. They have understood that, minority victims will be afraid to file case against the involved people of 2001. So government said that, government will file the suite against them. On the other hand the main opposition BNP has taken their position directly in favor of war criminals. Their party officially said that, they want to abolish the tribunal, which has set up for the trial of the war criminal. They are observing strike in favor of their demand and they are doing car march and rally in favor of the war criminal. Besides that, BNP has rejected the probe commission report on minority persecution. They are not only doing these but also according to media report, they are spending a lot of money for international lobbing to put pressure on the government of Bangladesh to stop it. But, the rational international communities are in favor of the present government of Bangladesh. The present government of Bangladesh is the only force in Bangladesh, which is liberal force. Its opposition is total extreme fundamentalist.

Once people of Bangladesh used to think that BNP may be a center right party on the other hand USA called them as a moderate Muslim party. But BNP has revealed its real face. They are now officially in favor of extreme Islamic fundamentalist. So things will not go in a straight line in Bangladesh. The government and the progressive people of the country have to fight to establish a secular democratic country. To establish real secular democratic country, both war criminals and the criminals who were involved in minority persecution have to face trial. Government of Bangladesh has to end the black day and ensure a sweet sunny day for all the religions, race and the community of this land.