Mining On The Moon Is A Not-So-Distant Possibility 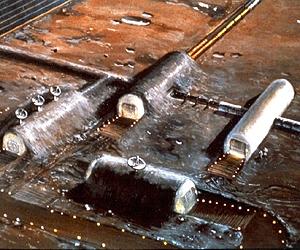 While lunar
mining might some day be economically feasible for countries and companies, a Missouri University of Science and Technology researcher believes strongly that mining in space is essential to the very survival of our species.

"Humanity eventually needs to live in more than just one place, other than the Earth," says Dr. Leslie Gertsch, an associate professor of geological engineering at Missouri S and T.

According to Gertsch, moon dirt contains a surprising amount of vital compounds, including water and maybe even "rare-earth elements" like lithium (think lithium-ion batteries).

Gertsch became fascinated with the moon while watching Apollo astronauts collecting lunar rocks on a black and white television in her family's Ohio farm house. Last year, she was paying close attention when NASA blasted a hole in the moon's surface, where more water than expected was discovered.

In addition to water, the moon has hydrogen, aluminum and iron.

Gertsch says the leading theory these days is that the moon was actually part of the Earth at one time - that it formed in the aftermath of a collision between the Earth and a massive foreign object. So it stands to reason that the moon has some natural resources in common with the Earth.

Best practices for mining on the moon and beyond are still being developed, of course, and that's a big part of Gertsch's research. She knows space mining would be essential to colonizing the solar system. Explorers would need to create fuel and breathing gasses as they traveled, instead of hauling heavy supplies with them from Earth.

"We could launch from the moon to go to Mars, for instance, at a lower cost," says Gertsch, who notes that asteroids and comets
are also good candidates for space mining activities.

I just hope, they don't come across Naavi^s there while mining. BTW Helium-3 might hold the key of future energy. Lets invade Mars & Moon!

Who will lay the claims for minning right. Ofcurs usa will lead. Other nations who have significant space programme can follow.

What if the moon does not want to be mined, wish it takes big fly swatter and swats that rocket when it approaches.
You must log in or register to reply here.
Similar threads
Moon mining
Indian American Lunar Mission for mining the Moon
Indian- American plans to mine the moon
Mine warfare
Share:
Facebook Twitter Reddit WhatsApp Link