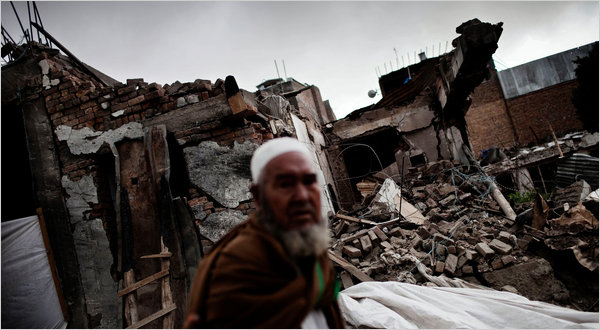 KABUL, Afghanistan — A Pakistani-based militant group identified with attacks on Indian targets has expanded its operations in Afghanistan, inflicting casualties on Afghans and Indians alike, setting up training camps, and adding new volatility to relations between India and Pakistan.
The group, Lashkar-e-Taiba, is believed to have planned or executed three major attacks against Indian government employees and private workers in Afghanistan in recent months, according to Afghan and international intelligence officers and diplomats here. It continues to track Indian development workers and others for possible attack, they said.

Lashkar was behind the synchronized attacks on several civilian targets in Mumbai, India, in 2008, in which at least 163 people were killed. Its inroads in Afghanistan provide a fresh indication of its growing ambitions to confront India even beyond the disputed territory of Kashmir, for which Pakistan's military and intelligence services created the group as a proxy force decades ago.

Officially, Pakistan says it no longer supports or finances the group. But Lashkar's expanded activities in Afghanistan, particularly against Indian targets, prompt suspicions that it has become one of Pakistan's proxies to counteract India's influence in the country.

They provide yet another indicator of the extent to which Pakistani militants are working to shape the outcome of the Afghan war as the July 2011 deadline approaches to begin withdrawing American troops.
Recently retired Pakistani military officials are known to have directed the Mumbai attacks, and some Lashkar members have said only a thin line separates the group from its longtime bosses in the Pakistan security establishment.

Some intelligence officials say it is also possible that factions of Lashkar-e-Taiba, which means "army of the pure," have broken from their onetime handlers and are working more independently, though Indian and Afghan authorities say the focus on Indian targets is being interpreted as a direct challenge from Pakistan.

"Our concern is that there are still players involved that are trying to use Afghanistan's ground as a place for a proxy war," said Shaida Abdali, Afghanistan's deputy national security adviser. "It is being carried out by certain state actors to fight their opponents."

A number of experts now say Lashkar presents more of a threat in Afghanistan than even Al Qaeda does, because its operatives are from the region, less readily identified and less resented than the Arabs who make up Al Qaeda's ranks. There were a few Lashkar cells in Afghanistan three or four years ago, but they were not focused on Indian targets and, until recently, their presence seemed to be diminishing.

A recent Pentagon report to Congress on Afghanistan listed Lashkar as one of the major extremist threats here. In Congressional testimony in March by Pakistan experts, the group was described as having ambitions well beyond India.

"They are active now in six or eight provinces" in Afghanistan, said a senior NATO intelligence official who, like others interviewed for this article, spoke on the condition of anonymity because he was not allowed to speak publicly on the subject.

"They are currently most interested in Indian targets here, but they can readily trade attacks on international targets for money or influence or an alliance with other groups," he said.

Lashkar's capabilities, terrorism experts say, have grown in recent years, since the group relocated many of its operations to Pakistan's tribal areas, where it trades intelligence, training and expertise with other militant groups, including Al Qaeda, the Taliban and the insurgent network run by Siraj Haqqani, also a longtime asset of Pakistan.

"A lot of hard-liners have broken away from LeT and gone to North and South Waziristan," said a Pakistani intelligence official, using an acronym for Lashkar-e-Taiba. "There are a number of splinter groups that are much more radical. The problem is not LeT per se, it's the elements of LeT that have broken away and found their place in Waziristan."

In that lawless expanse on the Afghan border, security officials said, Lashkar could help other militant groups plan complex attacks against Afghan and international targets, possibly in exchange for reconnaissance on Indian targets from its militant allies who have operatives in Afghanistan.

The Indian targets are easy enough to find. Since the overthrow of the Taliban government by American and international forces in 2001, India has poured about a billion dollars' worth of development aid into Afghanistan, including the construction of the new Afghan Parliament and several major electricity and road projects.

It has also revitalized consulates in four of Afghanistan's major cities — Herat, Jalalabad, Mazar-i-Sharif and Kandahar — fueling Pakistani fears of encirclement by hostile neighbors and suspicions that India is using Afghanistan as a listening post for intelligence gathering.
"What does an Indian consulate do in Afghanistan when there is no Indian population?" asked a Pakistani intelligence official, who also alleged that the Indians were providing funds, ammunition and explosives to the Pakistani Taliban in the tribal areas, smuggling it through Afghanistan. The Indians dismiss the allegations.
"It's a matter of faith, that's fixed in Pakistan's thinking, that India will take every opportunity to put Pakistan at a disadvantage," said Marvin Weinbaum, a senior analyst at the Middle East Institute, who testified before Congress in March about the mounting danger posed by Lashkar.

India supported an alliance of fighters in northern Afghanistan against the Taliban when the Taliban — a Pakistan ally — governed Afghanistan, and it maintains close relations with the alliance's former commanders, Mr. Weinbaum and others noted. The relationship adds to Pakistani fears that India will turn to proxies of its own in Afghanistan once the United States leaves.

Pakistan, meanwhile, has continued to allow Afghan Taliban leaders and other fighters battling NATO forces to base themselves in Pakistan. The intent seems to be to retain ties to those who might one day return to power in Afghanistan or exercise influence there.

One indication of Lashkar's presence in Afghanistan came on April 8, when a joint American-Afghan Special Operations force killed nine militants and captured one after a firefight in Nangarhar Province, in eastern Afghanistan. All of them were Pakistani and "a concentration of them were LeT," according to a senior American military official.

Lashkar is believed to have orchestrated the Feb. 26 car bombing and suicide attack on two guesthouses in the heart of Kabul frequented by Indians. An attack on a shopping center and bank in downtown Kabul in January also suggested Lashkar's influence.

Both attacks bore some resemblance to those in Mumbai. They involved meticulous planning and multiple targets, and in the case of the guesthouses, Indian targets. Also, multiple attackers were coordinated by people outside the country on cellphones during the attacks.

Witnesses told investigators that the attackers at one guesthouse came in shouting, "Where is the head Indian doctor?"

Hanif Atmar, the interior minister who resigned this month, lost three police on the day of that attack. He said at least two of the attackers had been speaking Urdu, a language found in Pakistan and parts of India. "They were not Afghans," he said.

"What we know for sure is that it was planned, financed, organized, and that people trained for it, outside Afghanistan," he said. "Over the past six months more than four attacks in Kabul had suicide bombers with telephones that we recovered with active numbers that were from Pakistan."

Several intelligence experts here said they doubted that Lashkar could have done the guesthouse attack alone. Lashkar operatives would have needed help to get into Afghanistan, a place to stay, weapons, explosive materials, vehicles and an opportunity to carry out reconnaissance on their targets, they noted.

The most likely partner, they said, would have been the Haqqani network, which is based in North Waziristan, has links to Al Qaeda, and is believed to have carried out a number of attacks of its own in Kabul.

Lashkar, in conjunction with Afghan extremist groups, was also believed to be involved in the Oct. 8, 2009, attack on the Indian Embassy in Kabul, which killed 17 people, and the Dec. 15 attack in front of the Heetal Hotel, which killed 8. At the time of the hotel attack, nearly two dozen Indian engineers were staying either in the hotel or in a building next door.
http://www.nytimes.com/2010/06/16/world/asia/16lashkar.html?pagewanted=1&hp
You must log in or register to reply here.
Similar threads
The wall of BRICS. The reality is that Pakistan has nurtured violent militant groups
Stop encouraging support to militant groups in Kashmir: Pakistan panel tells govt
IAF involved in 'Operation All Out' to eliminate Bodo militant group
China's Islamic Militant Group Founder Admits Pakistan Terror Links
Share:
Facebook Twitter Reddit WhatsApp Link