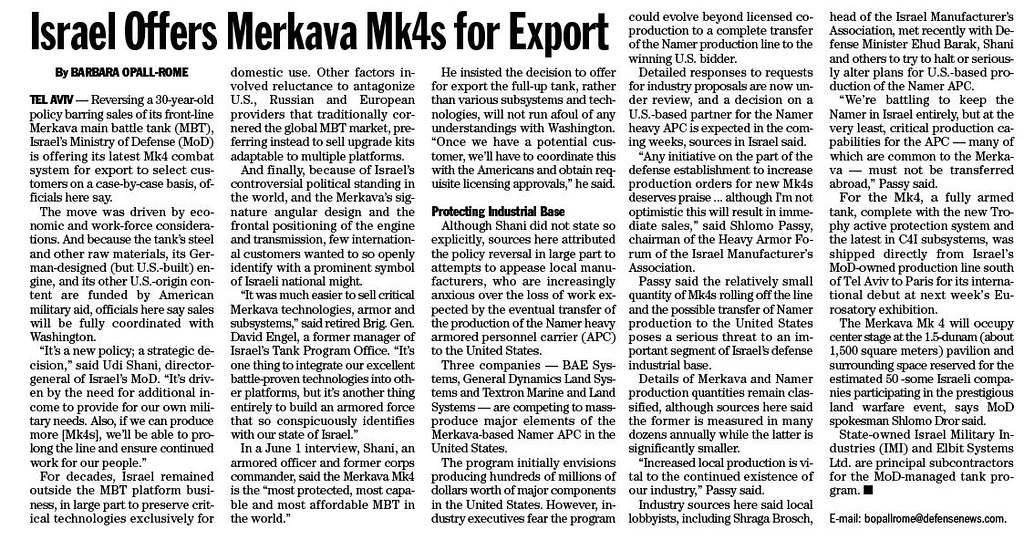 Merkava V ( Export variant ) is there for the first time in Europe at Eurosatory 2010.
Click to expand...

who would like to buy these tanks as already failed in Israeli Lebanon war in hands Russian advanced Anti-Tank missiles. Kornet ...........

Why would someone buy Merkava over Leo or Abrams or Challanger ? Assuming Merkava will be only sold to those countries which West will allow Israel to sell to ? And T-90 "MKI'd" is a fantastic Tank too and at a much cheaper price as well.

Merkava Mk 4 failed miserably in Lebanon, they must have thought people forgot which is why they waited till now. Setting themselves up for failure. They should stick with what they do best, UAVs.

A senior defense establishment source told "Globes", "Although development of Iron First has made very good progress over the last two years, it is far less developed than Rafael's Trophy system. On the other hand, the potential of IMI's system is much greater than that of Rafael's system."

The Merkava tank program administration believes that, were it not for the risk of a new war, it might be better to wait for testing of Iron Fist to be completed, because it is considered more advanced. In order to create a critical mass of tanks able to deal with the threat of anti-tank missiles, one to two brigades (200 tanks) need to be equipped with active protection systems, at a cost of at least $100 million.

According to Merkava tank program administration figures, missiles penetrated 22 tanks, killing 23 crewmen. The missiles in these cases were heavy Russian-made RPG 29, Kornet E, Metis-M, and Concourse missiles, used by Hizbullah. These are tandem missiles, with a double warhead that can penetrate the Merkava's reactive armor and steel plates 70-90 cm thick.

Tests conducted on the damaged tanks indicated that Hizbullah had full information needed to identify the Merkava's weak spots.

18 of the damaged tanks were the most modern Merkava Mark IV. Eight of the tanks were still serviceable, despite being hit.

The Merkava tank program administration said five of the damaged tanks cannot be returned to service, including two Merkava Mark II and one Mark III. The two tanks damaged by roadside bombs were a Mark II and Mark IV, which will not be returned to operational use. The Mark IV tank was equipped with underside armor, which prevented a large number of casualties among its seven-man crew; only the one soldier was killed.

18 of the 23 crewmen killed were in five tanks hit, half of them in clashes in Wadi Salouki. The Merkava tank program administration noted that when counting the tank casualties, it should be taken into account that some of the tanks hit were carrying additional troops in addition to their four-man crews, which increased the potential casualties.
The tanks protected 90% of the soldiers they were carrying.