Meet the family of crocs that ate dinosaurs 100million years ago!!

Prehistoric Jaws: Meet the family of crocs that ate dinosaurs 100million years ago​

A family of five terrifying prehistoric crocodiles - including one with teeth like the tusks of a wild boar - have been discovered by fossil hunters.

The predators roamed the swamps, lakes and rivers of Africa 100million years ago hunting small dinosaurs and seeking out fish and grubs.

Unlike their modern cousins, the ancient crocodilians were as agile on land as they were in the water.

Explorer Paul Sereno enveloped by the jaws of an eight ton SuperCroc. He holds the fossil head of DogCroc who along with four other newly described reptiles lived in the Sahara 100 million years ago 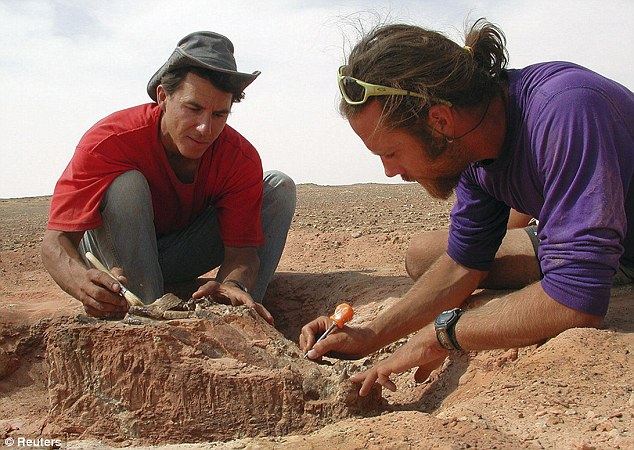 University of Chicago Professor Paul Sereno (left) and McGill University Associate Professor Hans Larsson excavate the fossil skull of a 100-million-year-old croc in Niger​
Their remains were uncovered in the Sahara by one of the world's greatest fossil hunters, Dr Paul Sereno of Chicago University, who in 2001 discovered the ' supercroc' - an eight ton, 40ft monster that lived at the time of the dinosaurs.

The latest haul includes new species with an astonishing array of snouts and teeth. The most ferocious is the 'Boar Croc', a 20ft meat eater with an armoured snout for ramming its prey and three sets of daggershaped fangs for slicing up meat.

Similarly long was the 'Pancake Croc', a squat fish eater with a 3ft-long pancakeflat head which rested motionless for hours, its jaws open, waiting for prey. 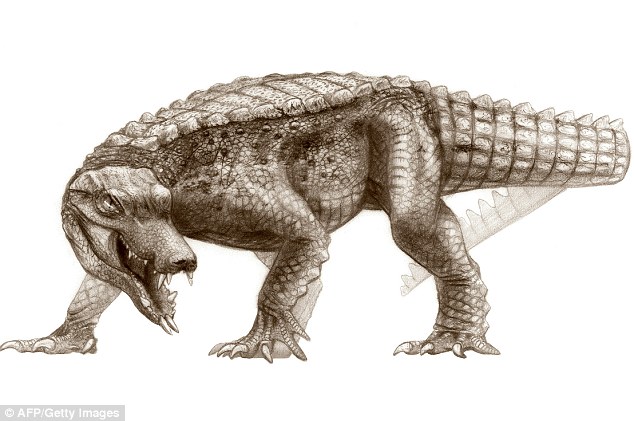 An artist's impression of the RatCroc, a 3-foot-long upright plant and grub-eater 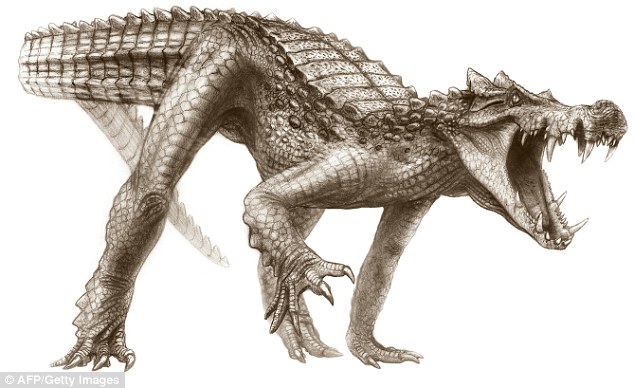 The Boar Croc: At 20ft long, this carnivore had an armoured snout with teeth like a boar's​
There were three other snappy little devils, each about three feet long. The 'Rat Croc' was a plant and grub eater whose buckteeth were used to dig for food, while the 'Duck Croc' had a broad, overhanging snout with which it rooted around in shallow water and mudbanks for fish and grubs.

Finally, the 'Dog Croc' ate plants and grubs, had a soft dog-like nose and was probably a good swimmer and fast runner.

Most of the crocodiles were found lying on the surface of a remote, windswept stretch of rock and dunes.

The Duck Croc: Used its bill-like snout to root out fish and grubs on mudbanks​
Palaeontologist Dr Hans Larsson, of McGill University in Montreal, said: 'We were surprised to find so many species from the same time in the same place.

'Each of the crocs apparently had different diets, different behaviours. It appears they had divided up the ecosystem, each species taking advantage of it in its own way.' 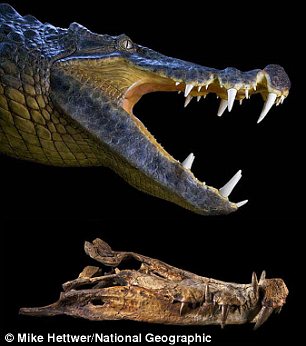 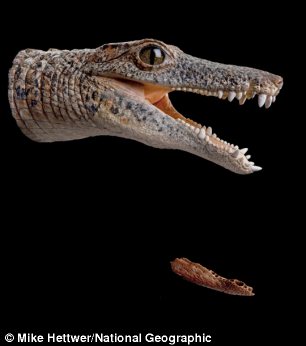 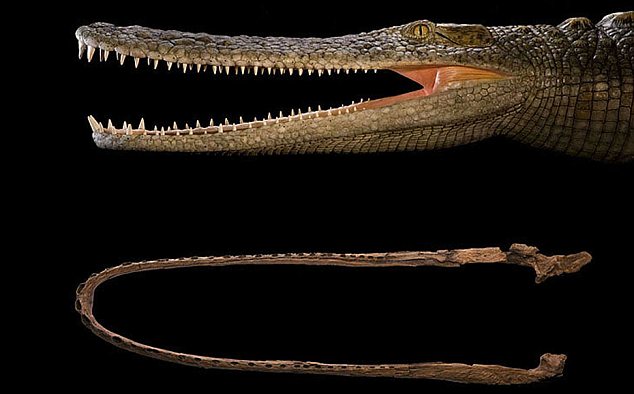 A flesh model of the head of PancakeCroc (above) and its fossil lower jaw. It was a fish eater with a 3-foot-long, pancake-flat skull​
* Modern crocs evolved 80million years ago and survived the global extinction that wiped out dinosaurs 65million years ago
* In hot weather, crocs can put their body on standby, conserving energy so well that they survive months without water or food
* A saltwater crocodile - at 23ft, the largest species of croc - can hold its breath under water for more than an hour
* Crocodiles can shed tears. Their eyes have glands which secrete a fluid that can be visible if they are out of water for a long time
You must log in or register to reply here.
Similar threads
Meet the Two Vietnamese VinFast SUVs You'll Be Able to Buy in the U.S.
PM Modi In USA 2021 - UNGA, in-person QUAD meeting
Mac Jee Group - Meet the Brazilian group formed by strategic defense companies, Mac Jee Defense, Equipaer and Mac Jee Tecnologia.
Agni missiles: more than what meets the eye?
Share:
Facebook Twitter Reddit WhatsApp Link