Mao in demand than ever in China

Mao in demand than ever: Chinese actors line up to play leader 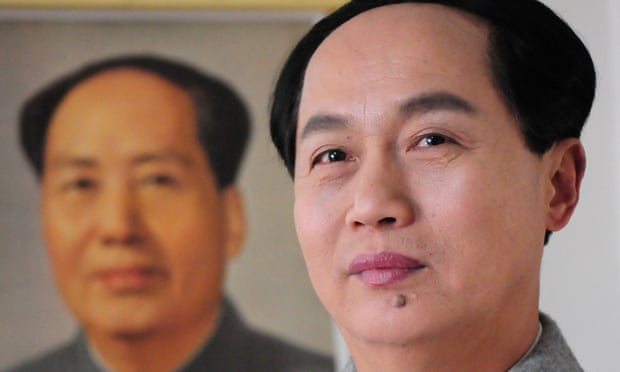 He has little interest in politics and is no socialist fanatic, but Xu Ruilin spends every free moment practising how to speak, write, walk and think like Mao Zedong.

Xu, 58, bears an eerie resemblance to the founding father of Communist China and is one of scores of lookalike Chinese actors in demand as production of historical propaganda television shows and films goes into overdrive.

Known as texing yanyuan – special type of actors – each one portrays a particular departed leader in voice, looks and style, akin to Elvis impersonators for famous Communists.

As well as Mao, their alter egos include his right-hand man, Zhou Enlai, economic reformer Deng Xiaoping and a host of other top brass.

Since President Xi Jinping came to power in 2012 and launched a crackdown on dissent, China's broadcast censors have narrowed down what is deemed acceptable, sending producers flocking to the relative safety of shows and films in line with the Communist party's approved version of history.

"Actors and directors told me for years I should play Chairman Mao, but mostly I ignored them," said Xu, who has spent most of his career in the theatre. "But these days there are so many opportunities to play Mao."

Even out of character, Xu has the Great Helmsman's hair and features. At work, he completes the transformation with a signature artificial chin mole, a grey Mao suit – the trousers hiked far above the navel – and by chain-smoking cigarettes.

He is constantly working on his Hunan dialect, the provincial inflected Chinese of Mao's home, and the leader's particular style of calligraphy, still used for the masthead of the ruling party's mouthpiece newspaper, the People's Daily.

Even Mao Xinyu, Mao's grandson and a major general in the People's Liberation Army, has given him his blessing, saying he was "very satisfied" with his performance, Xu said.

The more fortunate actors get starring screen roles, but most mimics are relegated to playing to smaller audiences, renting themselves out for corporate events, weddings and birthdays.

"Company tours always start with a rousing speech and then I'm treated like a visiting dignitary, like the real Mao, during a tour," said Xu, days after an appearance at a battery factory.

Most Chinese television historical dramas centre on the country's recent past, often set during Japan's 20th-century invasion and occupation, and with Communist party cadres always the heroes.

They have increased since Xi took power, accounting for roughly 44% of all Chinese shows produced in 2013, according to statistics from the State Administration of Press, Publication, Radio, Film and Television.

Most of the entries on one SAPPRFT list of 127 "recommended television programmes for broadcast" leaked by Chinese media last year were propaganda pieces, with titles including Deng Xiaoping at History's Crossroads, Zhu De, a Founding Father and We Are Party Members.

Plot lines in other shows are also subject to the censors' whim, with time travel, one-night stands, the use of sex in espionage and women falling in love with more than one man among banned subjects, along with wordplay and puns.

"Restrictions placed on most programmes make them very difficult to produce, but anyone is completely free to make anti-Japanese or historical shows," Zhu Dake, a professor at Tongji University in Shanghai, said. "In order to avoid spending a lot of money only to have a programme censored, everyone's making so-called historical shows because they have fewer restrictions and there's less risk."

The special actor concept was largely an import from the Soviet Union, beginning in the late 1970s after Mao's death and initially limited to one or two actors reprising their roles.

It has expanded in tandem with the media landscape and been a boon for Guo Weihua, who could be a twin of Zhou Enlai, but drives a Mercedes and sips lattes at Starbucks.

"I used to play other parts, but now there's too many projects with Zhou Enlai I almost always play him," said Guo, 52. "He has already gone into my bone marrow, when I'm standing in front of a camera, I am Zhou Enlai."

After appearing as Zhou in more than 70 television series and films, Guo would like to diversify but is typecast.

"For Chinese people of a certain age, we have a saying," he said. "Mao Zedong and Zhou Enlai, these two great men, were sent by God."

In 1942, Mao said that art must serve the masses and decried bourgeois literature and art, adding that works attacking the Communist party should be criticised and repudiated.

President Xi takes a similar line. In October he said artists should spread Chinese values and not be "slaves" to the market or "go astray while answering the question of whom to serve".

It is a question that even the lookalike actors should be asking themselves, according to Zhu. "The newcomers that play Mao Zedong these days, they haven't read Mao's biography, they haven't read Mao's writings," he said. "So how can they play him well?"
Mao in demand than ever: Chinese actors line up to play leader | World news | The Guardian
Click to expand...

Not withstanding what our honourable Chinese posters have to say, there is no doubt that the CCP has taken serious cognisance of the discarding of Chinese cultural values by the yuppies of China.

Indeed, Mao, even if repressive like Stalin, was the real architect of Modern China having dragged China over the coals with his ruthless ways.

Xi and the CCP are resolved to clean up the new psyche of materialism over everything that has afflicted the Chinese.

There is no doubt that affluence leads to individualism over the societal and national needs. People do become selfish and work only for themselves.

Xi has the wise acumen to fathom this and is bent on cleaning the Chinese society of the evils of greed that leads to individualism casting aside the old values that has made China what it is today.
You must log in or register to reply here.
Similar threads
Chinese TV anchor Bi Fujian off air after criticising Mao
China sends artists to the countryside in Mao-style cultural campaign
China-US Relations: The Return of Mao's Noose
Meet you at Mao Tse Tung Street in Tshwane
Share:
Facebook Twitter Reddit WhatsApp Link