The two leaders had "good discussions" and "a productive meeting" at Hotel Dusit Thani, the venue of the Asean and East Asia summits, official sources said.

Wen said: "We want to have a healthy and steady relationship with India. I hope we can use this opportunity to exchange our views on all related issues."
The much awaited meeting was aimed at easing tensions between the two countries centred on their unresolved border dispute. Official sources, however, said Arunachal Pradesh and Buddhist spiritual leader the Dalai Lama did not figure in the discussions.

The two countries also agreed to beef up their strategic and cooperative partnership.

Manmohan Singh told Wen: "I am excited to see you." He said the Chinese people have had a number of achievements "and we share their sense of accomplishment". He said this in the context of the 60th anniversary of the founding of modern China.

Earlier, the Chinese premier received Manmohan Singh like an old friend and spoke of the meetings they have had in the past.

IANS
Amid border tensions Manmohan to meet Chinese premier
A

Both nations know that its not the right time to let any dispute spiral out of control, particularly China. China will try to keep the issues on back-burner till parity between India and China tilts decisively in China's favor, and their geo-political stature becomes unparallel in comparision with India. Till then we can enjoy "Hindi-Chini Bhai Bhai".

Seriously, how can any trust be built without China giving up its false claim over Arunachal? Isnt the election result any indication to them that there is not even any public support if at all for fostering any such claims.

Also Amit, China is right now still powerful than India and there is a mismatch. But still they cannot and will not attach India as they know that whatever India has can seriously hurt them. And as time goes by, the parity will only reduce with India on a drive to acquire modern weapons system. If at all China has to attack, its now. 5 years from now they can forget about it forever.

Trade is the big puller, but strategic ambitions overwhelm the Chinese and its their compulsion to cut India to size. There can never be a permanent peace between the two countries. China follows the policy of there cannot be "ek miyaan me do talwar" or "two tigers in one jungle". So they cannot stand India as a competitor now or in the future.

All this talk is nothing but hogwash. Nothing is going to come out of it.
A

I don't understand why are we even talking about a war between India and China?!

China : Even if attacks India, will surely be after the calculation of damage that can happen to them. India may have to sustain more damage. But that more damage to India will be with respect to India only, and can be comparable in real terms w.r.t China's.

The only real reason China can think of a war with India, is when they think they can destroy the Indian defence and offence, by themselves sustaining damage within the Tibet area.
If they know that few Indian missiles could reach few of their important industrial cities, then it would be worthless for China too. 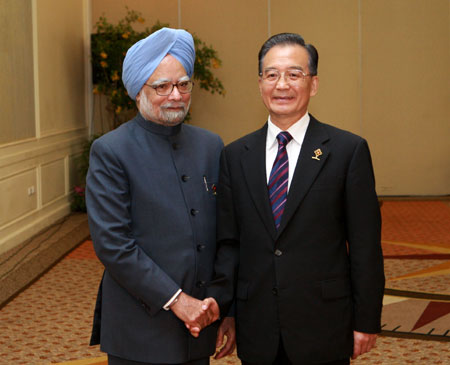 What a reluctant hand-shake

AJSINGH said:
i dont get the point of the meeting when the border issue and arunachal issue was not disscussed
Click to expand...


A M J said:
I don't understand why are we even talking about a war between India and China?!

China : Even if attacks India, will surely be after the calculation of damage that can happen to them. India may have to sustain more damage. But that more damage to India will be with respect to India only, and can be comparable in real terms w.r.t China's.

The only real reason China can think of a war with India, is when they think they can destroy the Indian defence and offence, by themselves sustaining damage within the Tibet area.
If they know that few Indian missiles could reach few of their important industrial cities, then it would be worthless for China too.
Click to expand...

it's merely a pressure tactic that china wants to keep alive so it can add to a list of grievances if and when it becomes useful , a sort of a bargaining chip.

they can say ok we "give up" our claim on AP and in return you give us this and that.

The fact that both countries have decided to ignore border tensions in such an eagerly-anticipated high-level meeting (which many thought would focus on the border dispute), shows that China's recent incursions didn't carry any major agenda. No wonder then, that New Delhi didn't appear to be taking things seriously (at least with regards to the incursions).

China, CCP, or sections of the CCP to be more precise, use border disputes and tensions with other nations to gain political mileage within the country. Let's hope than border tensions come down, now that the two governments have agreed that if peace and trade benefit each other more than petty tensions.

The looks of Chinese primer says that he was forced to give this photograph. This is the worst handshake of premiers I have seen. Even if he was not happy, he should have given better picture at-least.
N

roma said:
in reality india has the rght to claim parts of sichuan and the whole of yunan provinces as the native languages are related if not the same as in the north east of india
Click to expand...

That is very funny. According to your logic, I can say china has the right to claim parts of north east of india, because the native languages are related if not the same as in the west southern china.

Much ado about nothing! Seems like nothing concrete came out of this meeting either. Maybe they should not raise expectations so high the next time.

The two sides agreed to continue talks, with the aim of incrementally removing the barriers to a solution that was fair and acceptable to both sides.

Wen and Singh, meeting on the sidelines of the ongoing ASEAN-related summits in Hua Hin, Thailand, also agreed to try to ensure peace and stability in the border area, saying this would be conducive to resolving the border issues and furthering bilateral cooperation.

The two sides also agreed to take measures to encourage bilateral trade and investment, with the hope that bilateral annual trade would reach $60 billion by 2010.

The meeting aimed to help quench recent disputes in bilateral relations, which "actually have no major divergence but are severely impacted by Indian media", a former Chinese ambassador to India said.

The meeting came days before foreign ministers of both countries meet in India on Tuesday and a following return visit by the Indian top diplomat to China to prepare for a visit of Indian President Pratibha Devisingh Patil, the first such visit for an Indian head of state in nearly 10 years.

Border issues have tortured Beijing and New Delhi for decades. So far, 13 rounds of border talks have been held between the two.

Last week, China expressed its "strong dissatisfaction" over Singh's visit to a disputed border region of so-called "Arunachal Pradesh" where he addressed an election rally. India has also allowed the Dalai Lama to visit the region next month, while Indian media have been clamoring over an alleged "Chinese invasion" after border incidents in recent months.

"Actually there're no big issues between the two neighbors," Pei said. "And from the low-profile way New Delhi is dealing with rumors raised by Indian media - ranging from the 'invasion' to 'China's plan' to construct a huge dam on the upper reaches of the Yarlung Zangbo river (called the Brahmaputra river in India) - we can tell that it's very eager to keep good relations with Beijing."

Singh dismissed the dam rumor this week; he said China is not conducting a project on the river.

Pei said the heaviest pressure from India on bilateral issues comes from Singh's recent comments that India should remain cautious about China's military expansion, which is related to domestic pressure.

China also does not want to see the rumors affect its ties with India and the meetings are good chances for the two sides to make that clear, Pei said.

The two countries have just signed a broad agreement this week to work together on climate change and underlined their shared position on contentious talks seeking a new global climate deal, a typical example of cooperation between the two large developing neighbors, he said.

To facilitate such cooperation, Chinese ambassador to New Delhi Zhang Yan this week called on Indian media to stop one-sided reports that have cast a shadow on mutual trust.

Yeah right, one-sided reports must stop. Nice Idea. "today our friends from the glorious People's Republic of China have strolled into our territory with roses and assault rifles". "China opposed to an Indian citizen from going to....India"

I can totally see what he's getting at. A country that doesn't have a shred of press freedom has no moral right to even advice on what another country's free-press should do.
You must log in or register to reply here.
Similar threads
Former RAW chief AS Dulat slams PM Modi, says Vajpayee, Manmohan Singh handled Kashmir issue better
'Manmohan sabotaged India's Nuclear capability'
The new Modi-Doval doctrine on Pakistan is more robust than Manmohan's
Manmohan sabotaged India's Nuclear capability'
Share:
Facebook Twitter Reddit WhatsApp Link