Based on security forces' needs and DRDO capabilities, the requirements have been grouped in various technology heads, like technologies and devices for surveillance and Reconnaissance; Enhancing Day and Night Vision capability; Incapacitation; Arms and Ammunitions; Detection and Diffusion of Explosive and IEDs; Communication and Jamming; Personnel Protection and Support Systems.

A comprehensive mission mode programme with participation of many DRDO labs, security forces and industries is being formulated. Some of the weapons developed by DRDO which are quite useful for LIC Operations are :

-- Tear Gas Grenades (to incapacitate terrorists and flush them out from their hideouts and for mob dispersal / riot control operations).

-- Plastic Bullets (Non-lethal & non-poisonous bullets do not expand after penetration and cause only superficial injuries).

This information was given by Defence Minister Shri AK Antony in a written reply to Shri Varun Gandhi in Lok Sabha today.

Those chilli aerosol hand grenades are made with Bhut Jolakia (ghost-chillies) grown in Assam. Holed up terrorists are in for their weddings.

They should make something that when inhaled sterilizes the terrorists. That way we wont have more of their tribes!!!

There seems to be lack of equipment and training when it comes to crowd control. Tear gas canisters appears to be deadly when it directly hits a person, especially teens and pre-teens. It's better to use water cannons and also to give better training to police personnel when it comes to controlling an angry mob.

Kashmir will probably see more and more of these street protests in the coming years, so its better to start preparing now itself.
A

when is drdo going to invent some nonlethal weapon. GoI is presently trying to buy the time so that protest die its natural death . but i do not think this strategy going to work everytime

Latest reports said 64 people have been killed and thousands injured in less than three months, mostly in direct firing by paramilitary CRPF and police forces on the stone throwing protesters.

Prime Minister Manmohan Singh is understood to have given the go-ahead for the selective use of the gun, which is non-lethal and aimed at disorienting a crowd or even militants in action, news reports said.

The laser dazzler would flash a laser beam causing the protesters to go virtually blind for nearly a minute, good enough time for the troops to nab them, reports added saying that the laser beam is two to three metres wide.

The weapon was produced two years ago by Defence Research and Development Organisation (DRDO).

Times Of India recently quoted a top official saying that the DRDO has been trying to develop its own set of Star Wars-like weapons including the DEWs like Laser dazzlers.

The weapon has already been successfully tested by the army in "real combat" situations in Kashmir, reports added.

Prime Minister Singh gave a hint about the weapon when he said last week, "We need to revisit standard operating procedures and crowd control measures to deal with public agitations with non-lethal, yet effective and focused measures."

United Nations conventions however prohibit the use of laser guns that cause permanent blindness.

The gun originally developed by the US in the early 1990s was initially referred as far more terrifying military weapon.

Its development was arrested mostly due to international outcry that use of military dazzlers would be extremely cruel and inhumane, and the weapons were condemned both by the International Red Cross and the United Nations.

Experts said that a major problem that made laser dazzlers a political plutonium before they were ever even been deployed was that the difference in the amount of energy needed to temporarily blind and permanently blind a target was a very thin and not easily defined line.

For a long time, any laser that was capable of temporarily blinding a target in one instance could very easily permanently blind one in another, depending on many variables such as atmospheric conditions, range, orientation of the target, length of exposure, frequency, beam intensity, and more.

These problems could not be easily solved, and laser blinders fell out of favor as a form of personnel neutralization and began to be looked upon more for weapon sensor neutralization.

News reports in India however said that the guns developed by DRDO were fully compliant with the UN conventions.

Its a really interesting piece of weaponry! The Kind of stuff, we have seen in movies. Its always existed in US Military and all, and am happy to hear this being employed in India! Its surely a non lethal weapon like our PM Wanted! God Speed

ahmedsid said:
Its a really interesting piece of weaponry! The Kind of stuff, we have seen in movies. Its always existed in US Military and all, and am happy to hear this being employed in India! Its surely a non lethal weapon like our PM Wanted! God Speed
Click to expand...

Yes they are non-lethal but serve the exact purpose. There will be exponential drop in reaction time by Forces once riot/stone-pelting starts. Also having some shiny factor it'll put fear in protesters for sometime. Good move indeed & implementation of such weapon in forces will give DRDO & Developers inspiration to create other such laser-based weapons.
Last edited: Aug 31, 2010

Here is the Dazzler used by US forces - 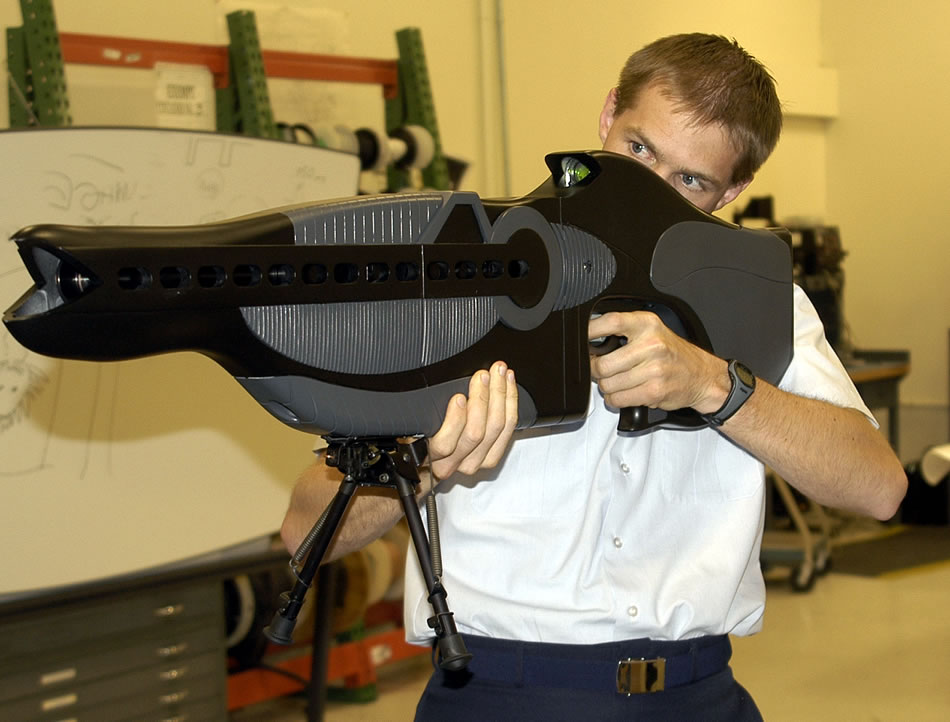 I could find only this picture of DRDO's Lase Dazzler. Looks real desi :happy_2:. Seems mounted on INSAS maybe still not sure. If other members have any photos of DRDO's Laser Dazzler, please share....

nrj said:
I could find only this picture of DRDO's Lase Dazzler. Looks real desi :happy_2:. Seems mounted on INSAS maybe still not sure. If other members have any photos of DRDO's Laser Dazzler, please share....

Put the chilli grenade in the *ss of the protestors, then they will know what if happen if it enters another mouth :emot180:
D

Not a good idea to use a weapon which could be severely controversial and will send human right activist throwing fits. The use of the weapon could be easily used by Gilani and his henchmen to commence on a disinformation / propaganda campaign against the forces.

Why change the weapon or the tactics, just change the target. Over 2 days arrest all troublemakers including the separtist leaders and keep them in Jail. No access, nothing. Only 2 scenarios can arise =
1. Protest initially and ebb down later. International community will remain quite. Pakistan will cry from pillar to post.. but honestly.. who cares for that?
2. There will be hardly any protest and the normal people in the valley will breathe a huge sigh of relief that Baba Gilani is cooling heels somewhere far away.

By using this technology, we are giving the separatists an even bigger weapon to target GoI with. No one wants to be experimentals pigs....

nrj said:
Here is the Dazzler used by US forces -

I think this is a more powerful one that can actually permanently blind , it also may have a longer range

Not really the standard now at days
This is more common

Something we would probably use

When turned on, the gadget, called laser dazzler, sends out radiation to immobilise individuals or crowds without causing permanent injury. The green rays can throw a wave of agony nearly 250 metres away.


AK Maini, who heads the DRDO's Laser Science and Technology Centre, told HT hand-held laser dazzlers with a range of 50 metres would be supplied to paramilitary forces by October for feedback on performance.


He said a vehicle-mounted weapon system for engaging mobs at nearly 250 metres would be ready by the end of next year.

What makes the laser effective is that it doesn't have to be aimed and shot, it moves like a large circle with a spread of almost 20 metres. It will allow security forces to disperse crowds without inflicting life-threatening injury.

Maini said the system was different from Western gadgets that employed millimetre wave technology to repel crowds by targeting different parts of the body.


He explained, "It's not a stun gun. The laser dazzler targets only the eyes. It could be the perfect solution to de-escalate aggression such as the kind caused by Kashmir's stone-throwing mobs."
Click to expand...

I hope the bhoot Jolakia grenades are stuffed up Maoists' and Kashmiri separatists' regions where sun doesn't shine and blown up. That will teach them what it means to meddle with India and create terrorism

Security personnel to use non-lethal weapons in J&K

The government has decided to use new generation non-lethal weapons to take on stone-throwing protestors in Jammu and Kashmir. Both central security forces and the state police have been asked to train their personnel in using pepper balls, chilli grenades, 20-feet high movable iron walls, electronic guns and water cannons.

Prime Minister Manmohan Singh had emphasised at the DGP conference on the use of non-lethal weapons for crowd control. "We need to visit standard operating procedures and crowd control measures to deal with public agitation with non-lethal, yet effective and focused measures. We also cannot have an approach of one size fits all," Singh had said.

Sixty-four civilians lost their lives to guns-hot wounds over the past few months in the Valley during clashes with security forces. The Jammu and Kashmir police have started using electronic guns that makes a person unconscious for a couple of minutes. Field trials of other non-lethal weapons are on and the state police will start using them in the next few months.

The Defence Research and Development Organisation (DRDO) is already conducting field trials of chilli grenades. These grenades will be used against protesters and during combating terrorists.

"The police are already using 150 electronic guns and each police station has received two of them to control the protesters. But these are very less and police have asked for more such guns. It is a very expensive equipment and costs up to $1,200 each while the cost of each cartridge is $40," said a senior home ministry official.

The officer said there was a need to come up with innovative, non-lethal ways to control the mob. "During a discussion, it was suggested that water cannons should be used on protesters and the police personnel should also be asked to spray water on their houses as well so that people feel cold at night because of wet walls and don't come to challenge security forces the next day," the officer said.

Another innovative but less expensive equipment that would be seen on the streets of Srinagar is the 20-feet iron wall that would be fitted with wheels so that policemen would be able to take shelter behind it when protesters start throwing stones on them. "We are distributing this equipment to the state police and it will help them protect themselves from stones during clashes," the source added.

It is not only the protesters who have been killed or injured in the violent clashes but security personnel have also suffered injuries and some have even lost their vision due to injury. In the past 80 days of clashes, starting June 11 this year, around 1,069 paramilitary personnel have sustained injuries. There have been at least 10 incidents when protesters have either hurled grenades or fired at policemen.

here is the pic where it is mounted on INSAS

this one is the best suited as it can be used along with regular INSAS to blind terrorists temporarily.
A

Use whatever it takes against those traitors..... protesting against India at the behest of Pakistan. At times we should learn from the ruthless approach of the Israelis. Once people realize that their protests will serve no purpose other than getting themselves shot, they will quieten down and start doing more useful work.
You must log in or register to reply here.
Similar threads
Bharat Electronics Limited - Low Intensity Conflict Electronic Warfare System (LICEWS)
Low Intensity Conflict Revisited
Low intensity blast in Allahabad
Pakistan Low-Intensity Nukes And Short-Range Missiles Targeting Indian Forces?..
Share:
Facebook Twitter Reddit WhatsApp Link