Long Way Down is a television series, book and DVD documenting a motorcycle journey undertaken by Ewan McGregor and Charley Boorman, on which they rode south through 18 countries from John o' Groats in Scotland to Cape Agulhas in South Africa via Europe and Africa in 2007. It is a follow-up to the Long Way Round trip of 2004, when the pair rode east from London to New York via Eurasia and North America.

The journey started on 12 May 2007 and finished on 4 August 2007. They were accompanied by the same key members of the team from Long Way Round, including cameraman and director of photography Claudio Von Planta, producers Russ Malkin and David Alexanian, and cameraman Jimmy Simak. In addition they decided to travel constantly with a medic, Dai Jones, security officer Jim Foster and various "fixers"—local guides and interpreters—throughout the journey. They rode the BMW R1200GS Adventure, the successor to the R1150GS Adventure bikes they rode in Long Way Round.

As with their previous trip, and Boorman's Race To Dakar, Russ Malkin and his company Big Earth produced the series. The television series based on the trip began broadcast on BBC Two on 28 October 2007. Video clips and photos from the adventure were shown online by the BBC during the series' production.

The team travelled from their base in Olympia, London to John o' Groats at the northern tip of Scotland to begin their journey. The start was almost delayed after Boorman, frustrated by an official at London Gatwick Airport, made an off-the-cuff comment related to terrorism, and was detained for questioning by local police. After being released without charge, Boorman took a later flight to Inverness and the journey was able to begin as scheduled. The team took four days to ride from John o' Groats back to London, via the McGregor family home in Crieff and the Silverstone racetrack, where they camped in the middle of the circuit. They took the Channel Tunnel to France, and rode south to Italy. The European leg of the journey ended in Sicily, where they caught a ferry to Tunisia.

In Tunisia, McGregor and Boorman visited the set of Star Wars (McGregor was not recognised despite the fact there were pictures of him) and from there they rode into Libya. However, American producer David Alexanian and cameraman Jimmy Simak were unable to obtain the necessary entry visas and were forced to fly from Tunisia to Egypt where they rejoined the team. After visiting the pyramids they boarded a ferry and travelled to Sudan, continued into Ethiopia and then into Kenya, where they crossed the equator. From Kenya they rode to Uganda and then Rwanda, where they had an audience with President Paul Kagame. They went from there to Tanzania, and then into Malawi, where they were joined by Ewan McGregor's wife Eve. The final leg of the trip took them through Zambia, Namibia, Botswana and finally into South Africa. The journey ended at Cape Agulhas, the most southerly point on the continent, to where they were accompanied from Cape Town by a phalanx of bikers, similar to their arrival in New York on the Long Way Round journey. 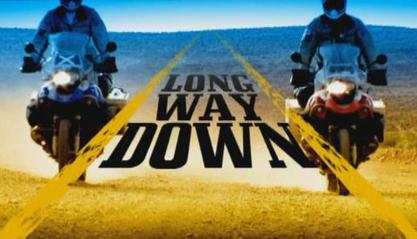