The Chinasat-2A satellite was built on the DFH-4 platform, with a launch mass around 5,200 kg. It was manufactured by the China Great Wall Industry Corporation (CGWIC).

Due to its military nature, there is little technical information on the satellite. However, China use two types of satellites for secure military communications: the Fenghuo and the Shentong.

The Fenghuo series is used for tactical military communications, providing secured digital data and voice communication to Chinese military forces.
The Chinese are currently operating the DFH-4 based Fenghuo-2 second generation satellite, with the first of the series – the ZX-1A Zhongxing-1A (37804 2011-047A) – launched at 13:33 UTC on September 18th, 2011, by the Chang Zheng-3B (Y16) rocket.

The Shentong geostationary military communication satellites are operated by the Army and their aim is to provide secured voice and data communications services for ground users using Ku-band. The satellite was based on the DFH-3 (Dongfanghong-3) satellite platform that was developed by the China Academy of Space Technology (CAST), having a heavier payload with better reliability and increased power supply.

Chinasat-2A will be the first of a second generation DFH-4 based Shentong-2 satellite in operation.

In recent years, the CZ-3B/E (Enhanced Version) launch vehicle was developed on the basis of CZ-3B, increasing the GTO capacity up to 5,,500kg. The CZ-3B/E has nearly the same configurations with CZ-3B except its enlarged core stage and boosters.

On May 14, 2007, the first flight of CZ-3B/E was performed successfully, accurately sending the NigcomSat-1 into pre-determined orbit. With the GTO launch capability of 5,500kg, CZ-3B/E is dedicated for launching heavy GEO communications satellite.

The third stage includes the payload adapter, the vehicle equipment bay (VEB) and the cryogenic propellant tanks and engines. The payload adapter mates the satellite to CZ-3B and bears the mechanical loads. This cargo adapter can be one of the international standard interfaces designated as 937B, 1194 or 1194A. The payload fairings consist of the dome, bi-conic section, cylindrical section, and reverse cone section and separation mechanisms.

The Xichang Satellite Launch Centre is situated in the Sichuan Province, south-western China and is the country's launch site for geosynchronous orbital launches.

Equipped with two launch pads (LC2 and LC3), the centre has a dedicated railway and highway lead directly to the launch site. The Command and Control Centre is located seven kilometers south-west of the launch pad, providing flight and safety control during launch rehearsal and launch. The CZ-3B launch pad is located at 28.25 deg. N – 102.02 deg. E and at an elevation of 1,825 meters.

Other facilities on the Xichang Satellite Launch Centre are the Launch Control Centre, propellant fuelling systems, communications systems for launch command, telephone and data communications for users, and support equipment for meteorological monitoring and forecasting.

Looks like a copy of our GSLV Mk-2 with the 4 boosters and all?

My car is a copy of yours with 4 wheels.

J8II said:
My car is a copy of yours with 4 wheels.
Click to expand...

Ya it is, all wheels are copied! No?

I wonder where your nations stole the blue print for the rocket! Must be the Soyuz.. No?
C

you need to check the histroy of CZ or long march rocket family, no, sorry, you copied from us talking about 4 boosters. 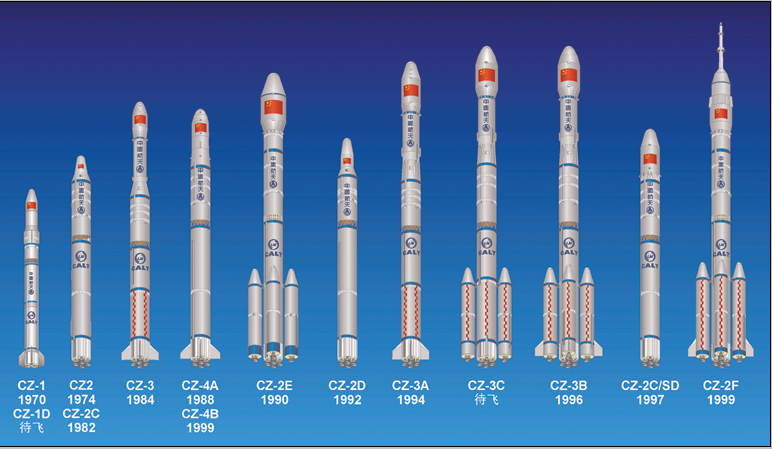 somebody really has no common sense or shame?

the retired LM-2E has the similar structure with Strap-on boosters , its first flight took place on 16 July 1990
CZ-2E (Chang Zheng-2E)

^^Someone really needs to archive these posts, real face of racist Chicoms :tsk;

He has low self esteem because he is not blessed down town. Better ignore him.

I don't know why you guys are putting so much effort for saying that Its a copy of Indian GSLV .. Whole world know the synonyms of copy = China. :taunt1:

Godless-Kafir said:
Looks like a copy of our GSLV Mk-2 with the 4 boosters and all?
Click to expand...

there r millions of ways u can go funny and u apprently picked the most effective way to do so.....my indian friend....

as a matter of fact although ur GSLV rocket has a copied viking engine as its 2nd stage aka vikas (which is also installed in PSLV) and it uses a russia made cryogenic engine (which is pretty successful in russia but very unsuccessful in india) it still is 1 of the most unsuccessful rocket systems in human history only second to your SLV and ASLV.....of coz south korea and north korea may be the good challengers to over take india in this field if thery cant solve the problems.....