Introduction to the Loitering Munition.

A loitering munition (LM), as a new type of the precision-guided munitions, a weapon class between cruise missiles and unmanned combat aerial vehicles UCAVs. This Type of Kamikaze Drones have similitries of both. In the cruise period, the LM conducts flight and mission target search in the form of a UAV, but in the launch section and the final guidance attack period, the LM switch mode as a missile. At launch, the original folded wings are unfolded, and the aircraft is transformed from projectile to drone form, and then the configuration of the loitering munitions does not change again after the conversion of the machine finished Therefore, it is a challenge for a LM to adapt to the control requirements of different mission phases under the same aerodynamic shape. This typical working process for a loitering munition includes pneumatic launch, loitering and gathering intelligence, locking on target, aborting mission, or precise attack. 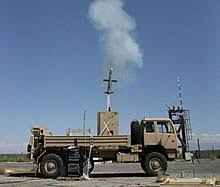 Traditional precision guided munitions include various types of guided missile, guided bomb, guided projectile, and cruise missile etc. The design of the propulsion system and guidance control system makes important positions in the system design, but they are kept independent as usual. The main goal of propulsion design is to achieve effective range and reach the final flight speed to meet the requirements of the attack mission. For example, the antitank missile uses a rocket engine as the propulsion to fly at high speed, and its main speed schemes include the following three types: boost, glide flight, boost, acceleration cruising, glide flight, and acceleration boost, constant velocity, boostcruising flight. A propulsion map and speed of typical high-speed kinetic energy antitank missile, and in general, while designing the guidance algorithms, it will be assumed that the flight speed is constant, especially at the terminal guidance phase, or the flight speed is time varying passively affected by gravity, propulsion, and aerodynamic forces. 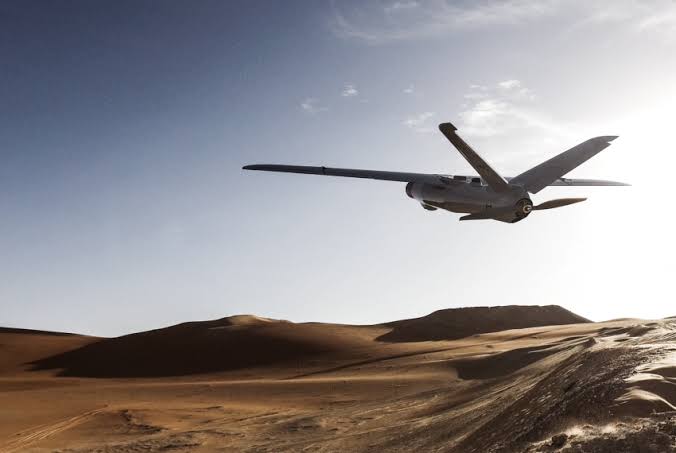 At the same time, the research of speed is mainly focused on the cruise flight process or is considered as a terminal constraint at some special flight mission, for example, a rendezvous mission to a tanker. Because the pneumatic layout and aerodynamic characteristics of LMs are closer to UAV than to missiles it is unreasonable to assume that the speed is constant or ignore the dynamic adjustable characteristics of speed just like a traditional precision-guided munition in designing the guidance and control algorithms in the terminal guidance phase. Therefore, it is of great significance to carry out research on the speed scheme at the terminal attack stage for a LM. This is concerned with the problem of designing speed-trajectory characteristics of the LM within the attack phase. First of all, the speed requirement of guidance and control design in the LM’s precision attacking process is concerned. Then, a speed scheme is proposed to improve the accuracy of a LM strike. In the following sections, the boundary condition for the establishment of the scheme is Mathematical Problems in Engineering. 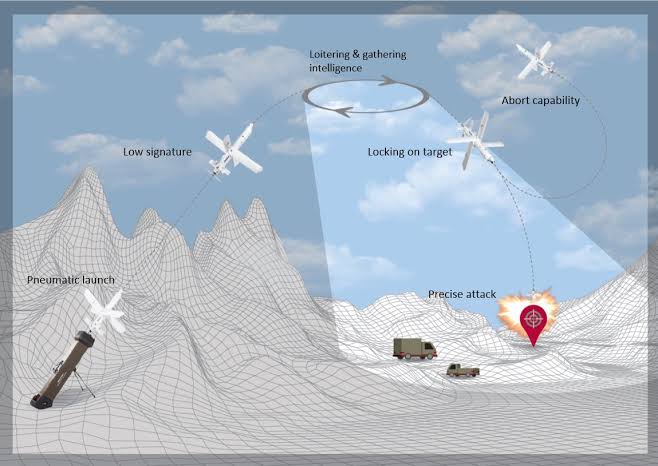 How the Loitering Munition System Works

while the operator is preparing to launch the loitering munition, the battlefield environment is supposed to be carefully analyzed. If the launch is not allowed, the operator should change the launch angle and position. After launch, operations need to analyze the characteristics of the target area in real time, determine a reasonable search strategy. When the characteristics of target have been analyzed, the operator needs to plan a reasonable attack ballistic to complete the mission.

The below graph shows a possible battlefield environment, when suffered sudden attack from enemies at the ridge, the loitering munition is launched to attack the target. But in this situation, the launch angle must be carefully adjusted fly over the highland before the target. L is the distance between the highland and launch position. H1 and H2, represents the two positions’ height, which are most likely to hit obstacles in this trajectory. 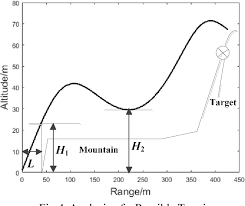 In this type, the launcher is set up to adjust the launch angle. The loitering munition climbs
according to the Angle of attack programs and then maintains stability of a certain Angle of attack, flight procedures are as follows:

First of all, based on the flat earth hypothesis, the 3-dof model of a certain type of loitering
munition is established, ignoring the rotation of the earth. It is supposed that the launch speed of the loitering munition is 30 m/s. The distance L between the launch position and highland in figure 4 is 40m.

with the increase of firing Angle, H1 has a significant increase, while H2 gradually decreases, and the jump of the ballistic becomes more and more obvious. When obstacles are near the loitering munition launch position, such as a jungle terrain, it is more reasonable to choose a larger launch angle to launch the loitering munition, but should choose propriate control law to ensure the safety of its decline period. When obstacles are far away from the launch position, but are like high hills, highlands and mountains, a smaller launch angle can be used to ensure the loitering munition have already climbed to the safety altitude when reaching the
obstacle.

Based on the genetic algorithm, the results are as follows:

The optimal firing angle is as follows：
optimal = 32.8.

The optimal ballistic, height and Mach along with the change of time are, the slope angle of velocity changing with time.

Speed Scheme for Miniature LM’s Precision Attack Equations of Aircraft Motion. As a novel precision guided munition, LM in the form of small UAV could use the low-cost strap-down seeker to achieve targetcapture and tracking during autonomous attack mission, so we discuss problems based on strap-down seeker against a stationary target. The flight model was expressed by differential equations in body-fixed coordinate which was defined as follows: the origin of coordinate system is located at the LM centroid. X axis is aligned with the longitudinal axis of LM; positive direction points to the LM’s nose. Y axis is perpendicular to
the longitudinal axis and lies in horizontal plane; positive direction points to right. Z axis is perpendicular to XY plane positive direction points down. *is body-fixed coordinate
system.

In order to introduce the speed scheme clearly, only the longitudinal motion of a LM has been discussed. The force analysis of a LM is, and the homing guidance geometry of missile-target engagement of the flight process. L is the lift force (aerodynamic force along z direction), D is the drag force (aerodynamic force along x direction), T is the thrust of engine, m is the mass of LM, g is the gravitational acceleration, and θ is the pitch angle Eulerangle along y axis of LM. R is the instantaneous separation between LM and target, V is the speed of the loitering munition in x direction in body-coordinate, VΓ is the speed of the loitering munition in z direction in body-coordinate, η is the angle made by the line of sight with respect to the fixed reference, and q is the pitch rate angular rate along y axis. Assume that VΓ is small and θ is close to η, and the thrust T is assumed to act through the LM centroid and along the x axis. Then, from the engagement geometry and the force analysis of the aircraft.

a speed scheme for loitering munitions has been given for precision strike mission. The pitch angle boundary of the solution during attack was given, and the existence and unique conditions of the system solution wereanalysed. Then, a flight test was taken to verify the scheme, and the result showed that the scheme was effective. At last, based on the analysis of experimental data, this paper summarizes the shortcomings of the program and proposes a clear direction for further research.

Distributed clock synchronization algorithm for switching and noisy networks
We write the local time of each agent i as 𝜏i (t) = t + 𝛼i, where αi is a constant denoting the time drift of agent i. Here, we assume the clock frequency of each agent is accurate in a short time. We aim to design a distributed protocol such that all the agents have a same drift. We design our algorithm as follows. (l) be the drift correction factor of agent j which is initially set to be zero. Let T be a constant denoting the period and βj be the real time of the protocol start for agent j.

In this thread, the research was taken from the National Natural Science Foundation of China. (Project No. 51406230).