Life on Trident: three months under the waves with 48 nuclear warheads

Life on Trident: three months under the waves with 48 nuclear warheads

Commander Julian Ferguson on life onboard a Trident sub 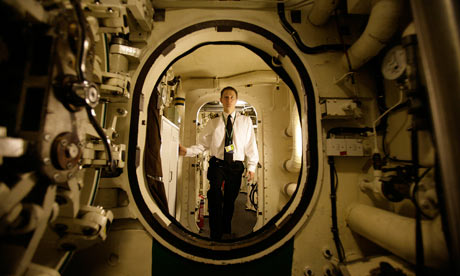 At any moment, one of Britain's four Trident submarines is out there, somewhere, patrolling a continent-sized patch of the Atlantic. When the 160-strong crew slip beneath the waves off Scotland's west coast, that's the last anyone sees of them for three months. Powered by a nuclear reactor, the submarines are almost silent and virtually undetectable. While on patrol, direct communication with navy bosses back home ceases, so potential enemies cannot intercept any signals. The crew are almost completely cut off from the outside world.

"Initially there is a sense of euphoria when the telephones are disconnected," says Commander Julian Ferguson, who captained HMS Vengeance on four patrols before retiring in 2006. "You think, thank God for that. You're on your own."

As captain, Ferguson knew where they were going, as did the navigator, but their superiors at base only knew the approximate area they would patrol. An aerial trails behind the submarine, to pick up radio signals from Britain if the prime minister presses the nuclear button. It also relays brief messages from the crew's families once a week; the sailors cannot reply.

If there was nuclear war and the captain was unable to communicate with base, there is a personal letter on board written by the prime minister to the captain. The contents are top secret but it is thought that the instructions include allying with the US, travelling to Australia if Europe has been destroyed and, ultimately, firing the weapons. The missiles cannot be launched by one man alone; the crew are not told what they are aiming at.

The crew first come together when the submarine is docked at Faslane, in Scotland, for a thorough service. After tests and training exercises, the vessel is stocked with enough food to last three months and heads out into the Atlantic. Far beneath the waves, it is untroubled by rough seas.

The crews are all-male. In fact, life as a submariner is seen as a favourable option for married men; their wives don't mind them being away for three months when there is no chance of raucous misbehaviour. "The atmosphere is very similar to a boarding school," says Ferguson. "Whatever your background, there is a sense of obligation to make the best of it and get on with it. That's a very constructive motivator."

One problem, says Ferguson, is preventing the crew becoming bored. The submarines must do manoeuvres, and crews practice targeting their weapons, but most of the work is watch-keeping. When not on duty, some sailors do Open University courses; most work out in the gym. Each has their own bed – but not bedroom – and they wind down by listening to iPods or watching DVDs. "Every sailor seems to have a laptop these days to show himself God knows what on his bunk," says Ferguson.

As captain, he maintained morale by ensuring the crew kept doing things together, whether it was unannounced drills, quizzes or gameshow nights. Towards the end of his patrols, a "sods' opera" would be organised with impressions, piss-takes, songs and, invariably, cross-dressing "stokers" with their beer bellies hanging over tutus.

Even in peace time, however, this is a risky business. In 2009, HMS Vanguard collided with the French nuclear submarine Le Triomphant. And the unexpected can always strike. Although there is a doctor on board, when one of his crew suffered appendicitis, Ferguson had to steer his submarine to a safe spot and call base for a helicopter. Vengeance surfaced and the sailor was airlifted to safety.

Is there ever any risk of unrest on board, as in films such as Crimson Tide? Ferguson says he cannot imagine any mutiny. As well as being extensively security checked, the crew's intensive training exposes any doubts about the mission. "You're not in the business of taking people you can't vouch for," he says. Now and again, a sailor will have a crisis of conscience; they usually go to the chaplain and if they don't resolve their reservations they leave the service.

When the voyage ends, "there is almost a feeling of anticlimax," he says. "As soon as the hatch opens and you get the welcoming party onboard, it's almost as if you've been invaded. You've been a self-sufficient community for three months – it's like, 'Who are these people?' The spell is broken.

"I would go straight back and do it this afternoon," he adds. "It is an extremely satisfying thing to do, but all the time you have to discipline yourself to say this doesn't go on forever; the subs are not yours, they are the Queen's and she is just lending them to you for a finite period of time."