An interesting video of carrier Liaoning. I'm not sure if anyone had posted it before.

In many ways Lioning is a white elephant for the Chinese as they preferred local upgrades as opposed to OEM. Other Chinese aircraft carriers are copies of Lioning, hence has multiplied Chinese problems several times over. Moreover the Chinese claim a lot but they lack an aircraft to operate, have no experience in naval warfare and aviation. Also they are afraid of the deep. That is cultural with them.

None of their A/C will travel 4000 km to Indian Ocean and be a threat to India in a forceable future. 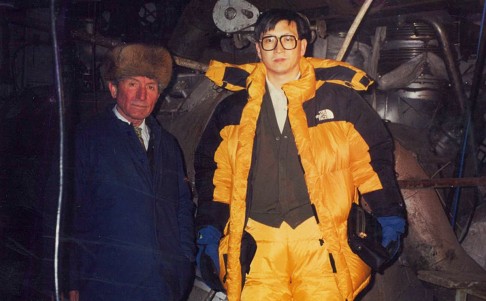 It was a mission like no other. In the aftermath of the Soviet Union's collapse, one businessman armed with cash and a casino cover story scooped the world to buy the unfinished hulk of a Ukrainian aircraft carrier that would become the centrepiece of the PLA Navy.

Speaking to the media for the first time, the Hong Kong-based businessman at the heart of the undertaking reveals in a two-part series the details of the little-known, behind-the-scenes odyssey to realise China's long-held dream of owning such a warship.

Xu Zengping disclosed that the militarily sensitive original engines of the carrier were intact when Ukraine sold the vessel in 1998. This is contrary to what Beijing told the world at the time.

The "four intact engines had been perfectly grease-sealed" after work stopped on the vessel in 1992, presenting an enticing engineering package for a country seeking a leg up for its military.


It is the first time anyone linked to the deal has confirmed publicly the engines were in place at the time of purchase. Earlier reports said the vessel's power generation system was removed at Ukraine's Nikolayev South Shipyard on the Black Sea along with its electronics and weaponry before Xu bought it in 1998 for US$20 million.

"When I was taken to the carrier's engine room by the shipyard's chief engineer, I found all four engines were brand new and carefully grease-sealed, each of them originally costing US$20 million," Xu said. He said a refit finished in 2011 restored the four engines to operating condition.

What is now called the Liaoning was built on the hull of the partially completed Soviet Kuznetsov-class carrier, the Varyag. The Black Sea shipyard was about two-thirds of the way through the vessel's construction when work stopped as the Soviet Union crumbled. The hull languished until Xu made the deal, acting as a middleman for interests within the PLA Navy.

Xu said the shipyard agreed to sell the vessel because of the political turmoil that had left it in dire financial straits.

"The Chinese side deliberately released false information about the removal of the engines to make it easier for Xu and the shipyard to negotiate," a source familiar with the deal told the South China Morning Post.

Western media also reported that the United States pressured Ukraine to remove everything on board the carrier, selling only the hull to the Chinese buyer, the source added.

A retired PLA Navy colonel said it was "very likely" that the Liaoning was still using the original Ukrainian engines. "The Ukrainian engine technology is better than China's," the retired officer said. "It's my understanding that our navy later sought help from Ukraine to get the carrier engines, which had been sealed up for years, up and running."

Buying the carrier was just the start. It took another four years to tow it from Ukraine to Dalian in Liaoning province, and more than a decade to fit it out.

There were signs that the engines had been improved.

The carrier was renamed Liaoning when it was formally delivered to the PLA in September 2012 and so far has been used only for training.

Its pennant number - a type of naval identification - is 16. "Do you know why the Liaoning has been numbered 16?" Xu asked. "It was because we spent 16 years getting the job done, from making the deal to rebuilding it."
Last edited: Dec 25, 2019
You must log in or register to reply here.
Similar threads
PLAN CG of Liaoning (Varyag) in action.
India's K-15 Ballasic Missile tasked to take out China's Aircraft Carrier 'Liaoning'
Taiwan's new stealth corvette designed to blind Liaoning
F-35 is Liaoning's worst nightmare: Global Times
Share:
Facebook Twitter Reddit WhatsApp Link