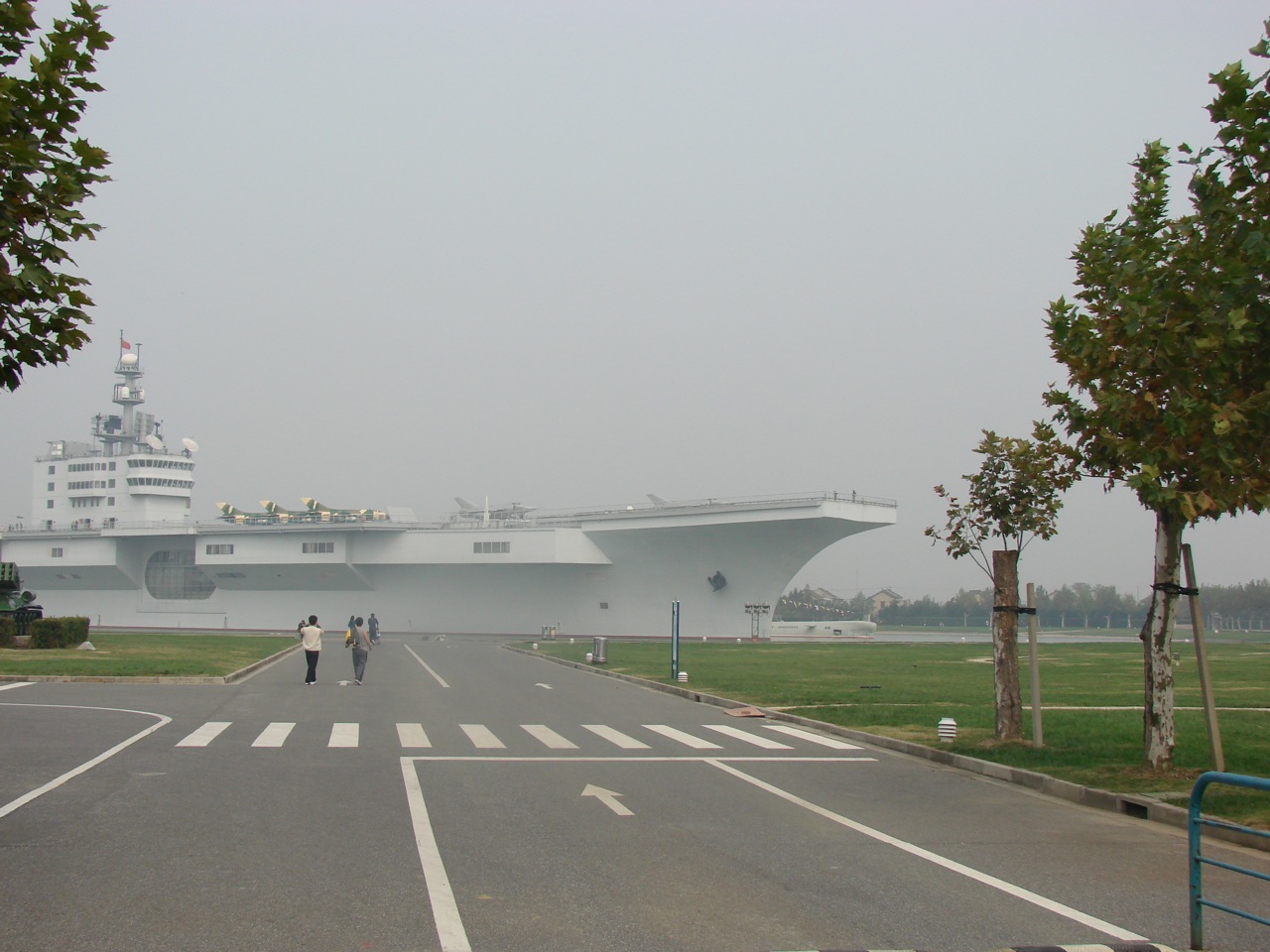 Chinese navy prepares to add aircraft carrier to its fleet

CHINA will have an aircraft carrier "very soon," a top Chinese naval officer said yesterday, fuelling speculation about a pending official announcement on the long-awaited project.

The Global Times newspaper cited Admiral Xu Hongmeng, the east China fleet commander, as saying China possessed both the ability and motivation to build a carrier – a weapon system that is strongly backed by the navy but somewhat less enthusiastically by the People's Liberation Army's top commanders.

"China really needs a carrier. Both technologically and economically, China already has the capacity to build a carrier," said Admiral Xu, who was quoted while attending the national legislature's annual session in Beijing on Thursday. "China will very soon have its own aircraft carrier."

Admiral Xu's remarks came on the day the central government announced its 2009 budget, including a 15 per cent rise in military spending this year to the equivalent of £50 billion.

Beijing has been researching an aircraft carrier for years, having bought a mothballed Russian one in 1998. The army is also rumoured to have bought four carrier landing systems and up to 50 Russian Su-33 carrier-based aircraft.

Strategically, a carrier is seen mainly as a deterrent to US intervention in any conflict over Taiwan, although Chinese experts say it would mainly serve to police the 1.2 million square miles of sea claimed by Beijing as its maritime territory.

It would also provide vital air cover in the event of a conflict farther from China's shores, either in the South China Sea, where it has territorial claims, or in the crucial sea lanes of the Indian Ocean.
Click to expand...

now that is a formidable looking aircraft....
i think they will go straight for the nuclear powered super carrier....cauz of thier US superpower wannabe tendencies....and also as they ordered 50 crafts for one carrier that will be more than gorshkov and IAc combined....
but we also have a 64000 ton carrier on our design boards,and if china starts now it will take atleast 7 years of construction and a further 2 years as sea trials it will be in thier hands not before 2018.

shiv said:
and if china starts now it will take atleast 7 years of construction and a further 2 years as sea trials it will be in thier hands not before 2018.
Click to expand...

Having a carrier and aircraft's to operate from it is one thing; another is the time need to train the sailors & airmen to fly off of the carrier and land on it; that's gonna consume a lot of time.

I wonder why the Chinese put up such a big A/C model while they don't posses one?:35:
E

Payeng said:
I wonder why the Chinese put up such a big A/C model while they don't posses one?:35:
Click to expand...

Domestic consumption.... not intended for us, but for the local audiences...
S

this is not a model aircraft carrier but an original kuzentov carrier from ukrain which china bought with a promise that it will not be used for military purposes...

shiv said:
this is not a model aircraft carrier but an original kuzentov carrier from ukrain which china bought with a promise that it will not be used for military purposes...
Click to expand...

yes shiv you are absolutely right about it the image is of the varyag in the drydock in Dalian.
it is being refitted for the purpose of training.

Its a Building and not an aircraft carrier it is the award winning (for creative architecture) "Military Education Center" at the "Orient Green Boat After-School Camp for Youngsters." Located at west of Shanghai, the camp was constructed at the shores of Dianshan Lake.
D

HAHAHHA WHAT A JOKE!! lol its a building.
but i bet china will be coming with its AC very soon.
As for indian AC why are we not going for nuclear powered ac???? Why does it have to go tejas way? when after 3-4 yr we say we want nuclear powered ac. I hope we know what we want and our future need is.
S

i wont waste time finding a link to it but the next IAC will be a 64,000 ton nuclear powered carrier--->this text came straight from A.K antony's mouth in a speech...will be completed by 2017
Y

The video is made by a couple of Chinese military amateurs,I think the purpose they made it is simple , just to show that how deep they love their country,and at the same time to show their great talent in the field.Today,many people make MTV,videos,or record their own songs on the Internet,it is a fashion.
But,I think a major country have to posses a air-craft carrier to protect its land,and avoid being threatened.
And the photos are taken in a theme park ,and the air-craft carrier can't make an expedition.One of my relatives made some photos with it ,too.

duhastmish said:
HAHAHHA WHAT A JOKE!! lol its a building.
but i bet china will be coming with its AC very soon.
As for indian AC why are we not going for nuclear powered ac???? Why does it have to go tejas way? when after 3-4 yr we say we want nuclear powered ac. I hope we know what we want and our future need is.
Click to expand...

Regarding nuclear powered A/C's their are speculations that India would go for it soon as the technology is ready and proven, while China have proven nuclear reactors that are been employed in their subs.:boat:

Regarding the Tejas question, I suppose your need a proven Aircraft on board and I would like to see an Indigenous aircraft onboard along with our very own HAL Dhruv, different people have difference in view, its OK.

Some Snaps of the So Called Chinese Aircraft Carrier........

The Jets Stationed Look Like the FC-1 :drink: ( FC-1's have a Naval Variant i did not know that ) ( Pakistan Must be more then happy with the Snap ) (now even they can Dream of a Chinese made AC with FC-1's )

PPL are over joyed with the Sight of the ACC......

How did they ever hide it from the Praying eyes of the American Spy satellites... America must be worried now...:helpsmilie:

Since it is not located or stationed in the China Sea or some gulf near the chinese border the PLAN (Chinese Navy) managed to keep the US spies off ...

Americans they will never take the Chinese Seriously.......:drink::idhitit::drink:

satish i think the french can help the chinese in the aircraft department....

and thier carrier will be ready by 2011..and they have a knack for meeting deadlines unlike our indegenous departments

BEIJING (AFP) — China will not remain the world's only major nation without an aircraft carrier indefinitely, state press Monday cited the nation's defence minister as telling his Japanese counterpart.

Liang Guanglie made the remarks to visiting Japanese Defence Minister Yasukazu Hamada on Friday, the Oriental Morning Post said, in discussions that took place after a recent spike in tension in the South China Sea.

"China's navy is currently rather weak, we need to develop an aircraft carrier."

Liang's comment is the highest-level recent confirmation that China aims to acquire an aircraft carrier, a sophisticated piece of military hardware that can be used to project power far beyond a nation's shores.

It comes after several similar calls in recent months by senior members of the People's Liberation Army.

"Building aircraft carriers is a symbol of an important nation. It is very necessary," the China Daily quoted Admiral Hu Yanlin as saying earlier this month.

"China has the capability to build aircraft carriers and should do so."

Defence Minister Liang was speaking after Chinese vessels confronted and nearly collided with a US naval surveillance ship in what Washington says are international waters off south China earlier this month.

The confrontation was described by US intelligence director Dennis Blair as the most serious military incident involving the two powers since a US spy plane collided with a Chinese fighter jet in April 2001.

China said the US naval ship Impeccable was carrying out illegal activities in its exclusive economic zone.

Beijing has also reacted angrily to a Philippine law passed earlier this month that laid claim to parts of the Spratlys Islands in the South China Sea which are claimed by China and other nations in the region.

China called the law "illegal and invalid," and dispatched a civilian patrol boat to the region.
Click to expand...

Looks like the Chinese are going to alot of trouble near the city of Wuhan, Shipbuilding Corporation for engineering support of the 701-th project of the Institute is building a full-scale model of the heavy aircraft-carrying cruiser. 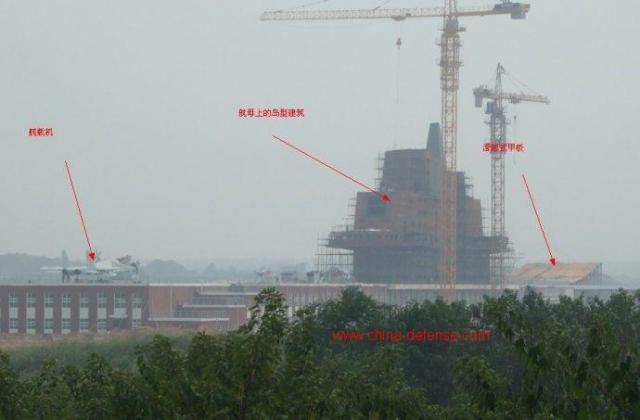 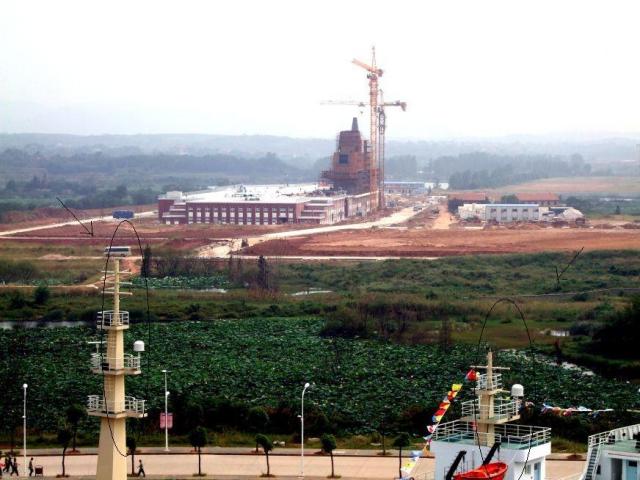 why feel it strange?

Chinese of course should have a facilities to train its piliots.