Eenam Gambhir
the first secretary at the permanent mission ... 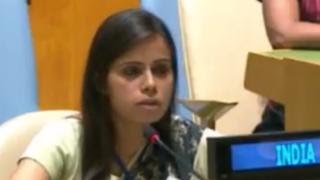 exercised its “right of reply” ,
at the United Nations general assembly on Friday,she said: “In its short history, Pakistan has become a geography synonymous with terror. The quest for a land of pure (“Pak” is Urdu for pure) has actually produced the land of pure terror. Pakistan is now Terroristan.”

in 2016 too , Gambhir’s statement started off by describing Sharif’s speech as a “long tirade” about the situation in Kashmir and called Pakistan a “terrorist state”. It also set the stage for a speech by external affairs minister Sushma Swaraj.

Title should be ladies 2 Pakistan 0, so far.

Don’t think sushma Swaraj UNGA speech is given yet.

ezsasa said:
Title should be ladies 2 Pakistan 0, so far.

Don’t think sushma Swaraj UNGA speech is given yet.
Click to expand...

Nermala sitaraman..
You must log in or register to reply here.
Similar threads
BREAKING: Live updates: Trump says he and First Lady have tested positive for the coronavirus
The Ladies in color
China's first lady beats out Michelle Obama
Hi ladies (are there any?) and gentlefolk. I am new
Share:
Facebook Twitter Reddit WhatsApp Link