In early 2008 it was revealed that Iran had begun to employ silo basing for its missile force. The Tabriz silo complex was situated on flat, level ground and was readily identifiable, and therefore vulnerable. Recent developments uncovered in Iran indicate that silo basing of a more survivable variety may be underway.

The Imam Ali missile base is located west of Khorramabad, Iran. It is subordinate to the Iranian Revolutionary Guard Corps' (IRGC) missile force, and has often been referred to as a production and storage facility. There are two main facilities associated with the Imam Ali missile base. The first of these is an expansive storage facility, with numerous hardened bunkers. This facility may be home to an operational unit, or alternatively it could be a mass storage facility used by the oft-associated production complex. The second facility associated with the Imam Ali missile base is far more interesting, as it has characteristics indicating that it may be an operational missile launch facility. The National Council for Resistance in Iran made reference to an operational missile facility 35 kilometers from Khorramabad in December of 2004, and this facility appears to match that description.

The two major areas of the Imam Ali missile complex can be seen in the image below: 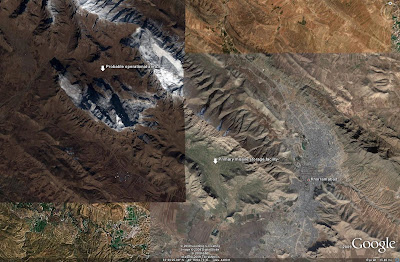 The northwestern facility of the Imam Ali missile complex is hidden, surrounded by terrain features and only accessible via road through a single entry control point. Great care has been taken at this location to make the most use out of the terrain by constructing underground facilities, in direct contrast to the storage facility to the southeast. This implies that the northwestern facility is not only more secure but also far more secretive in nature.

Various facilities are present here, including an administrative and support area, numerous UGFs, and air defenses. An overview of the facilities present can be seen in the image below: 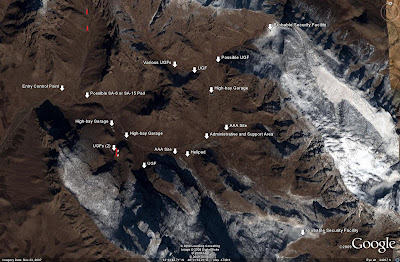 It has been reported that former Iranian President Khatami ordered a 15 missile Shahab-3 MRBM unit to stand up at a location near Khorramabad. Coupled with the aforementioned information on the Imam Ali base revealed in 2004, this suggests that this location is the operational Shahab-3 facility referred to by Khatami.

As an operational Shahab-3 complex, the various UGFs would likely be used to store missile and warhead components, with high-bay garages in the area being used for warhead mating and missile/TEL checkout procedures. Two 30 meter concrete strips present in the northwestern part of the facility are likely launch points for the missiles, easily accomodating the Shahab-3's towed launcher and providing presurveyed launch points. The combination of presurveyed launch points and hardened storage facilities provides the Shahab-3 unit with a more secure existance; during increased hostilities missiles and TELs can be mated and checked out prior to launch and stored in the UGFs, awaiting word to deploy and fire when needed. Once deployed, geodesic tie-in is not needed, further reducing the time required to fire a missile.

The two launch pads at the Imam Ali launch complex can be seen in the image below: 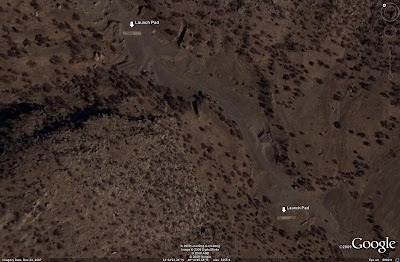 There are problems associated with using the mobile Shahab-3, however. First, a liquid fueled missile normally can only remain fueled and ready to fire for a short time before the propellant begins to evaporate or damage internal components. Granted, this depends on the propellant used and the design of the fuel tanks, but it would be remiss to ignore the issue entirely. Second, public statements regarding missile deployments by leaders of nations who are potential targets for either the American or Israeli militaries are, at best, purely *****ic. Once the location of these missile bases are known, the easiest way to eliminate the threat of these weapons is simply to target the UGF entrances, preventing the weapons from deploying to fire. While there are certain issues with such an endeavor, such as weapon accuracy, this type of aerial attack can be accomplished with a degree of success by an experienced and well-equipped air arm.

Iran may have found a solution to leaders like Khatami announcing to the world the location of ballistic missile bases. One solution is the use of missile silos such as those found at Tabriz. The problem with the Tabriz silos is that they are in the open, and do not appear to be significantly hardened. The Tabriz silos are potentially vulnerable to an aerial attack and while they do represent an increase in survivability and deterrent capability, particularly in their ability to mask the readiness state of any weapons contained therein, they are not necessarily a thoroughly ideal solution to either aspect of missile deployment.

A second solution can be found at the Imam Ali missile facility. Two of the UGFs appear to have been constructed underneath a gently sloping plateau containing what appear to be missile silo openings. Deploying missile silos in such a way not only allows missiles to be fueled and readied for firing under cover, denying an adversary the knowledge that the missiles are at increased readiness, but also removes the negative impact of the UGF entrances being targeted. These facilities can also be constructed in such a manner that they would be much more difficult to detect than a facility along the lines of Tabriz, providing the Iranian missile force with a substantial boost in deterrent and offensive capabilities.

A three dimensional view of the Imam Ali silo complex can be seen in the image below. This is the only UGF which appears to feature silos, likely due to the much flatter terrain under which the UGFs were constructed. 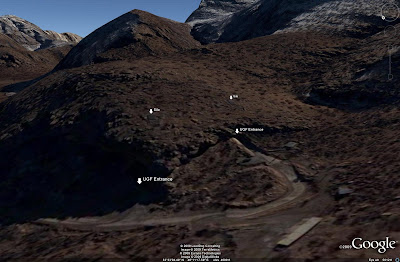 The Imam Ali silos appear to be capped with a 6.5 meter by 6.5 meter cover, and are surrounded by various openings which may be exhaust gas vents, ventilation, or simple trial borings. The silo cover is the potential giveaway to the true nature of this facility insofar as it is virtually identical in size to the cover found on the silos at Tabriz. The main difference is that while the Tabriz silo covers split open to either side, the Imam Ali silo covers appear to be mounted on tracks intended to slide downslope as a single unit.

Details of the Imam Ali silo complex can be seen in the image below: 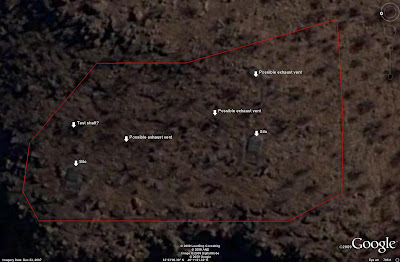 It has now been demonstrated that there are two potentially silo-based missile facilities within Iran. This is indicative of a continued desire by the Iranian military to enhance the survivability of its missile force, and decrease the warning that an adversary would have that missiles are being readied to fire. As the Iranian missile force continues to modernize and expand, the trend of silo basing will likely continue, resulting in a missile force that is far more dangerous than previously believed.
You must log in or register to reply here.
Similar threads
Pakistan Buys Russian Kornet-E Anti-tank Guided Missiles
Radar scattering simulation of AARGM-ER missiles
Pak Army Ordered HJ 12E Anti Tank missile
Pakistan Army Navy jointly developing Hypersonic Missile
Share:
Facebook Twitter Reddit WhatsApp Link