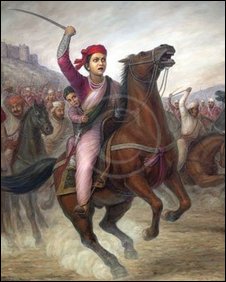 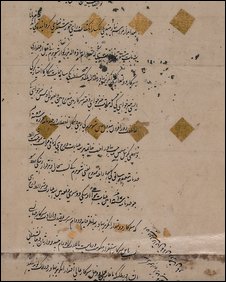 A previously undiscovered letter written by one of India's best known female rebels against British colonial rule has been found by academics.
The letter was written by Lakshmibai, Rani of Jhansi, shortly before the Indian mutiny - or first war of independence - in 1857.
It has been found in London in the archives of the British Library.
The Rani of Jhansi has often been called the "Joan of Arc" of the Indian independence struggle.
Academics say the discovery of the letter is hugely significant, because so little historical evidence from the Rani of Jhansi's lifetime exists.
Fateful events
"The letter is part of a collection of documents known as the Bowring Collection," said Deepika Ahlawat, research curator for the Victoria and Albert Museum's Maharaja exhibition currently being staged in London.
"The collection is named after Lewin Bentham Bowring, a civil servant working in India who gathered a remarkable collection of documents, photographs and ephemera relating to the maharajas."

The letter is one of the few remaining artefacts from the Rani of Jhansi's life
The letter is written by the Rani of Jhansi to the governor-general of the East India Company (EIC), Lord Dalhousie.
In it she describes the fateful events on the night her husband died.
"But under the doctrine of lapse then being imposed by the EIC, any Indian kingdom whose ruler died without an heir, or who was guilty of misrule - was subsumed into Company territory," explained Ms Ahlawat.
Fearing this doctrine, the Rani said that her husband adopted a suitable heir before his death by performing all the necessary rites for her adopted son, Damodar Rao Gangdhar, to be accepted as the next Raja of Jhansi.
But Lord Dalhousie did not recognise the adoption and threatened to annex Jhansi, now in the state of Uttar Pradesh.
In 1857 the Rani joined the rebellion against the British and personally led her troops in battle. At one point she was captured by EIC troops but subsequently made a daring escape from a fort.
"All this made her the stuff of legend," said Ms Ahlawat. "According to some stories she died riding into battle against the British - another story says that she was shot while holding the ramparts of Gwalior Fort.
"Whatever the truth, the story of a female leader battling for her kingdom against the might of the EIC fired the nationalistic imagination when the contested history of 1857 came to be written.
"This a letter written by an iconic talisman for the nationalist narrative in India, and her equestrian statue can be found in town squares all over the country."
Click to expand...

This image statue one can see at same place in gwalior where she was martyred in front of phoolbagh. that area was nicely maintained when i was kid till madhav rao schindhia was alive after that whole garden dried up due to lack of care and apathy.