Jews celebrate Blessing of the Sun 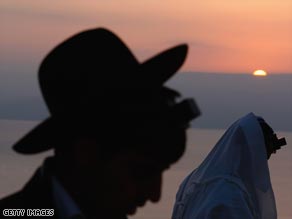 Jews in Tiberias, Israel, participate in the Blessing of the Sun at sunrise Wednesday.

According to Jewish tradition, the sun was at the same spot in the sky when it rose Wednesday as it was when the world was created.

The event occurs during the spring equinox, which occurs every 365¼ days. Once every 28 years, it occurs at dawn on a Wednesday (the fourth day of creation, based on Jewish beliefs), when Jews recite the blessing. According to Jewish beliefs, God created the sun, the moon and the stars as the fourth day began.

"It is so rare and so unique," said Rabbi Raphael Tennenhaus, executive director of the orthodox movement Chabad-Lubavitch, in South Broward County, Florida. "To know that millions of people observe this today is extremely inspiring and exciting."

The prayer for the Blessing of the Sun, called Birkat Hachama in Hebrew, is recited "Blessed are you, lord our God, king of the universe, who re-enacts the works of creation."

The Australian Jewish News reported hundreds of Jews celebrated the event in Sydney.

In Israel, the Jerusalem Post reported 50,000 people celebrated the event at the Western Wall in Jerusalem.

Tennenhaus said 250 people gathered at his Chabad headquarters to celebrate the event with singing and dancing.

He described the event as a "strengthening of faith" and said it "brings together people from all backgrounds and is something that brings a lot of unity to the Jewish people."

He described it as a reflective experience for himself and his congregants.

"It gave me a chance to reflect on the future and the past and I was grateful to have the opportunity to thank God for creating the sun," said Claudia Hochman, who participated in his service with her 16-year-old daughter, Emily.

"Twenty-eight years from now I'll be 44," Emily Hochman said. "Me and my friends were imagining what our life would be like then. It seems really far, but it's great to think about that."

Prouser said that Jews are "simultaneously celebrating the complexity of the solar system and our natural attachment to scripture."

"The 28-year cycle is based on both the realities of the solar year and the solar system and our cosmic relationship to the sun, and is anchored in our reading of the Torah and the Bible," Prouser said.

Prouser said he worked for a year to create the prayer book that conservative congregations nationwide used to lead their Blessing of the Sun ceremonies.

At Temple Beth Torah in Tamarac, Florida, Rabbi Michael Gold began his service by singing "Here Comes the Sun," by the Beatles. About 25 people turned out to celebrate the event, he said.

The middle-aged rabbi said he chose the song because it's one his generation can relate to and it talks about the power of the sun.

He said his congregants -- even the most old-fashioned and conservative among them -- were excited about the event.

Wednesday's blessing was rarer than most -- it fell on the eve of Passover, the Jewish holiday commemorating the release of Jewish slaves from Egypt in Biblical times.

http://edition.cnn.com/2009/US/04/08/blessing.of.sun/index.html?iref=topnews
You must log in or register to reply here.
Similar threads
Increasing Attacks on Jews in Germany by Arabs
Hamas TV: “Palestinian” boy wants to become engineer “so that I can blow up the Jews”
Judge orders NY transit agency to run 'Killing Jews' ad
Radical islam in France---a danger for French jews ??
Share:
Facebook Twitter Reddit WhatsApp Link