The Japan Air Self-Defense Force's F-2 multirole fighter would have the edge over its Chinese counterpart, the Chengdu J-10, in an aerial encounter, defense and security blogger Kyle Mizokami says in a piece for National Interest published on Oct. 13.
The territorial dispute over the Diaoyutai islands (Diaoyu to China, Senkaku to Japan which controls them) in the East China Sea has increased the chance of close aerial encounters between fighters of the two sides, Mizokami wrote. He said Japanese patrol aircraft had already been intercepted several times by PLA fighters in the region after China declared its air defense identification zone over the East China Sea toward the end of 2013. 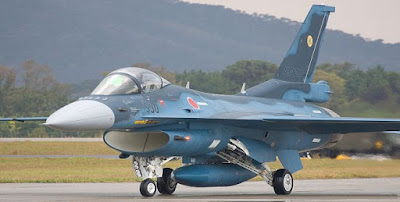 While Japan's American-built F-15J fighter will engage China's Russian-built Su-27 for aerial superiority, the Mitsubishi F-2 is more likely to go head to head with the Chengdu Aircraft Industry Group's J-10 since both aircraft were developed as multirole fighters with aerial combat as well as ground support capabilities.
Overall, Mizokami believes the F-2 has the advantage over its rival in an aerial engagement. First, the F-2 has a superior combat radius — 520 miles, compared to J-10's 340. Second, the F-2 has a better active electronically scanned array radar than the J-10. Picking up the J-10 first, the F-2 can launch a AAM-4B from beyond visual range, he said.
The AAM-4B is currently the only missile in the world fitted with active electronically scanned array radar, he added. Because of the missile's after-launch target lock capability, the Japanese pilot could begin evasive maneuvers even before achieving radar lock and the J-10 could be shot down before it is even able to engage.
Mizokami admitted one advantage of the J-10 over the F-2 at close range, however, as the latter is not fitted with an infra-red search and track system.

China may be big in size but when it comes to quality China cannot even match with Japan's piss.

The main disadvantage is sheer numbers J10 that can be thrown by chinese on japan and we cant tell only J10 will attack F2 they have Su 27and new 5th gen flight so we should think abt that:blah::blah::blah:
You must log in or register to reply here.
Similar threads
The Bomb Didn’t Beat Japan… Stalin Did
Japan lifts ban on arms export - will help create a balance of power in the region
India, Japan Sign 75 Billion Dollar Currency Swap Agreement
Beijing's response to Japan's new destroyer shows its authoritarian endgame in the South China Sea
Share:
Facebook Twitter Reddit WhatsApp Link