Japanese protest against US military base in Okinawa

Where Japanese fight a US military base with kayaks 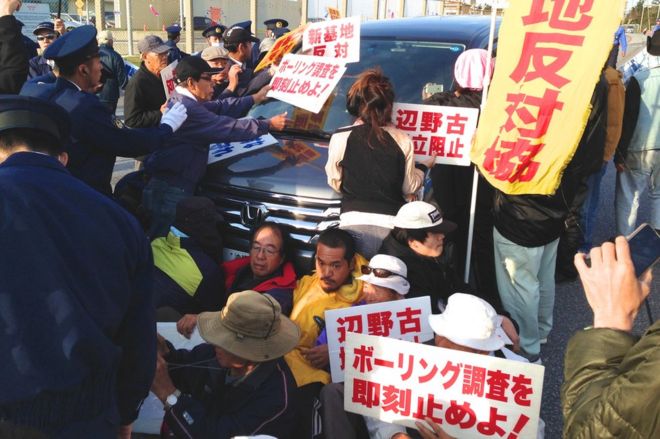 As Japanese Prime Minister Shinzo Abe travels to the US for a state visit, one Japanese island is pushing back against a new American military base.
This week in Washington, Japan's Prime Minister Shinzo Abe will sit down with President Barack Obama and tell him the US-Japan military alliance is stronger than ever.
In many ways this peculiar love affair between the US and Japan, which began after one country dropped atom bombs on the other, does look pretty solid.
But while Japanese people may like the protection that the US alliance brings, they don't much like the US bases and tens of thousands of personnel that come with it.
Most will never get to see the 50,000 US military personnel stationed in their country. That's because most of the Americans are far away on the island of Okinawa. 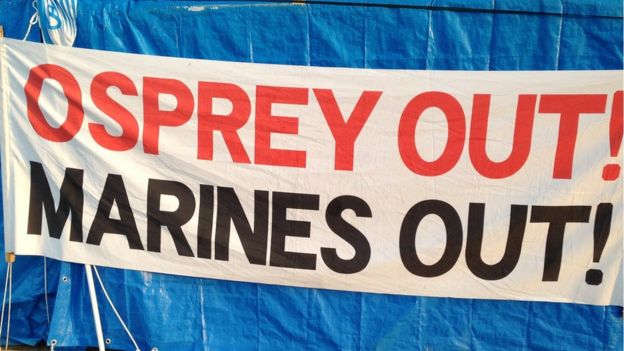 Okinawa makes up just 0.6% of Japan's land mass but, as the locals will never tire of telling you, it hosts over 70% of the US bases in Japan.
The people of Okinawa are weary of the 70 years of "semi-occupation". They have long complained of the noise and danger from US planes and helicopters flying day and night.
Most of all they complain of the young men of the US Marine Corps, who are seen as drunken, violent and a threat to Okinawan women.
In fact the statistics speak otherwise - the incidence of rape, murder and other crimes by American personnel in Okinawa is low.
But a small number of horrific cases have done huge harm - in particular the 1995 gang rape of a 13-year-old Okinawan schoolgirl by four US Marines changed attitudes here dramatically. 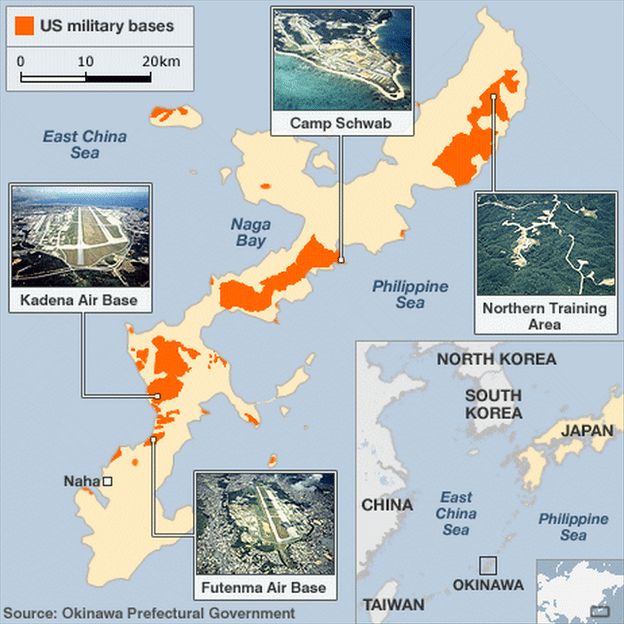 It's a big reason why the US government wants to move Futenma, the largest Marine base in Okinawa, out of the densely populated south of the island to a remote spot 60km away.
It sounds like a good idea. The city of Ginowan will get a big chunk of land back. Its people will get to sleep at night and its daughters will no longer have to fear.
But for most Okinawans, 60km is not nearly far enough. They want to see the US Marines moved much further - say Guam for instance, or even better, Australia.
As plans for building the new base at Camp Schwab have moved forward, attitudes here have hardened. Tokyo insists there is no other choice.
Okinawans have responded by kicking out the pro-Tokyo governor and electing a new one who has promised to block any construction. Tokyo has simply over-ruled him.
It is, say many in Okinawa, the behaviour of a colonial regime, and it is making people here mad.
Click to expand...

full story: Where Japanese fight a US military base with kayaks - BBC News

Japan and the U.S bolstered their strategic alliance for the first time in almost two decades as they seek to respond to China's increasingly assertive posturing in the Asia-Pacific region.
New defense guidelines released Monday in New York expand U.S.-Japanese cooperation around the globe and into space and cyberspace. Japan will take on a more robust role that potentially includes cooperating with the U.S. to intercept ballistic missiles and protect ships, according to the new document.
U.S. Secretary of State John Kerry praised the guidelines as a "historic transition" in a joint press conference with Defense Secretary Ashton Carter and their Japanese counterparts Fumio Kishida and Gen Nakatani in New York.
Click to expand...