Japan begins to shake off US foreign policy influence

Defense Minister Toshimi Kitazawa said Japan would pull out its two naval ships from the Indian Ocean operation when their current mandate expires in January. The refueling mission began in 2001.

Chief Cabinet Secretary Hirofumi Hirano said Japan is studying what other contributions would be best for the region and hoped to come up with a proposal within weeks.

"We believe that civilian support for the people's livelihood in that country, such as agricultural reconstruction, would lead to a fundamental solution to what constitutes the basis of terrorism," Hirano said.

Japan begins to shake off US foreign policy influence

New government's efforts to break free from decades of subservience, starting with withdrawal of ships from Afghanistan campaign, raise potential for discord with US 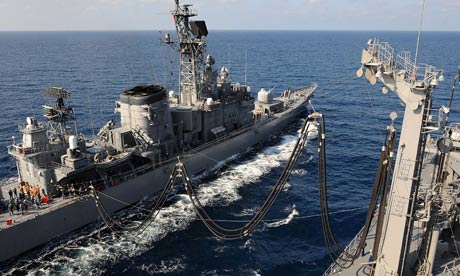 Japan Maritime Self Defence Force (JMSDF) ship 'Mashu' conducts a refueling exercise on the Japan Sea. Mashu had been on the Indian Ocean to refuel destroyers. Photograph: Sankei/Getty Images

Japan's confirmation today that its refuelling ships will be withdrawn from the Indian Ocean in January is the first real sign that the new Tokyo administration is honouring its election pledge to break free from decades of subservience to US foreign policy.
The announcement had been expected for weeks after heavy hints from the prime minister, Yukio Hatoyama, and other senior officials that Japan would seek other ways to contribute to peace in Afghanistan.
Since 2001 Japanese vessels have provided fuel and water to US and allied warships in support of the war effort. Hatoyama, whose Democratic party of Japan (DPJ) has consistently opposed the mission, will instead attempt to ease US concerns with a raft of humanitarian measures. He hopes to have a comprehensive plan in place before Barack Obama arrives in Tokyo on 12 November for a two-day visit.
"We believe that civilian support for the people's livelihood in that country, such as agricultural reconstruction, will lead to a fundamental solution to what constitutes the basis of terrorism," said the government's chief spokesman, Hirofumi Hirano.
Japan's determination to offer new, non-military solutions to Afghanistan's problems was evident at the weekend when the foreign minister, Katsuya Okada, made a surprise visit to Kabul to discuss long-term reconstruction with the Afghan president, Hamid Karzai. Japan has already committed itself to paying the Afghan police force's salaries for six months and is funding several education projects that it hopes will weaken the lure of the Taliban among disaffected Afghan men.
Although the US and Britain have urged Japan to extend its refuelling mission beyond January, Washington has indicated it will accept a withdrawal in return for deeper involvement in Afghanistan's reconstruction. Among the extra measures being considered by Japan, which has pledged $2bn in aid over the last eight years, is job training for former Taliban fighters.
The issue with the greatest potential to cause discord between Hatoyama and Obama lies much closer to home, on the southern island of Okinawa, where two-thirds of the 50,000 US troops on Japanese soil live. Under a 2006 agreement designed to reduce the US military footprint on the island, 8,000 marines will be transferred to Guam, a US territory in the Pacific Ocean, by 2014. The marines' base, which covers a quarter of the overcrowded city of Ginowan, will be moved to a new location on Okinawa's west coast.
But the agreement's future was thrown into doubt with the DPJ's landslide election victory in August. Hatoyama took office last month promising to review the deal, with some on the left of his party calling for the base to be moved to the mainland or out of Japan altogether.
Publicly, the US says it is happy to give the Hatoyama government time to "evaluate" its stance. "We view the United States and Japan as partners, equal partners," the US ambassador to Japan, John Roos, said last week. "As partners, we want to listen to what they have to say and work with them on this issue." Privately, however, state department officials have indicated to their Japanese counterparts that the base agreement is not up for negotiation.
Further evidence of the shift in Tokyo's foreign policy priorities came last week when Hatoyama met his South Korean and Chinese counterparts, Lee Myung-bak and Wen Jiabao, in Beijing for talks on the formation of an "east Asian community" inspired by the European Union. The leaders said they would explore the idea of a free-trade pact and co-operate more closely in other areas, including climate change and sustainable growth.
In the long-term, Hatoyama's east Asian vision could involve the introduction of a single currency among the three countries, whose economies account for about 16% of the world's gross domestic product. The community could be extended to include India, Australia, New Zealand and the 10 members of the Association of South-east Asian Nations.
"Until now we have tended to be too reliant on the United States," Hatoyama said. "The Japan-US alliance remains important, but as a member of Asia, I would like to develop policies that focus more on Asia."