It's Time to Kick Erdogan's Turkey Out of NATO

It's Time to Kick Erdogan's Turkey Out of NATO 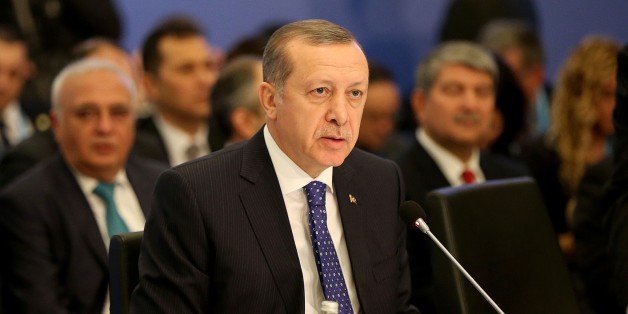 It has always been a matter of historical curiosity that one of the American diplomats who was deeply involved in the creation of the North Atlantic Treaty Organization was named Achilles. As the head of the State Department's Office of Western European Affairs after World War II and the eventual U.S. Vice Deputy of the North Atlantic Council, Theodore Achilles played a lead role in drafting the treaty that was designed to deter an expansionist Soviet Union from engaging in an armed attack on Western Europe. With 11 European nations joining the U.S. as founding members in 1949, the alliance quickly grew to include two other countries - Greece and Turkey - by 1952 and today encompasses 28 members.

It's a reflection of how difficult it was to imagine that any member of the organization would betray the rest of the alliance that to this day, NATO has no formal mechanism to remove a member in bad standing or to even define what would constitute "bad standing." Yet, nearly three decades after the collapse of the Soviet Union, NATO members still make the same solemn vow to one another, known as Article 5, that they made in 1949: that an attack against any member state will be considered an attack against all member states, and will draw an immediate and mutual response. For nearly seven decades, this combination of factors has been the potential Achilles heel of NATO: that one day, its members would be called to defend the actions of a rogue member who no longer shares the values of the alliance but whose behavior puts its "allies" in danger while creating a nightmare scenario for the global order.

After 67 years, that day has arrived: Turkey, which for half a century was a stalwart ally in the Middle East while proving that a Muslim-majority nation could be both secular and democratic, has moved so far away from its NATO allies that it is widely acknowledged to be defiantly supporting the Islamic State in Syria in its war against the West. Since Islamist strongman Recep Tayyip Erdogan came to power in 2003, Turkey has taken a harshly authoritarian turn, embracing Islamic terrorists of every stripe while picking fights it can't finish across the region - including an escalating war with 25 million ISIS-battling Kurds and a cold war turning hot with Russia, whose plane it rashly shot down in November. With those fights coming home to roost - as bombs explode in its cities and with enemies at its borders - Turkish leaders are now demanding unconditional NATO support, with Prime Minister Ahmet Davutoglu declaring on Saturday that he expects "our U.S. ally to support Turkey with no ifs or buts."

But it's too little, too late. NATO shouldn't come to Turkey's defense - instead, it should begin proceedings immediately to determine if the lengthy and growing list of Turkish transgressions against the West, including its support for Islamic terrorists, have merit. And if they do - and they most certainly do - the Alliance's supreme decision-making body, the North Atlantic Council, should formally oust Turkey from NATO for good before its belligerence and continual aggression drags the international community into World War III.

This is an action that is long overdue. As I argued five years ago, "Erdogan, who is Islamist to the core, who once famously declared that "the mosques are our barracks, the domes our helmets, the minarets our bayonets, and the faithful our soldiers"--seems to see himself as the Islamic leader of a post-Arab-Spring Muslim world." He has spent the past 13 years dismantling every part of Turkish society that made it secular and democratic, remodeling the country, as Caroline Glick of the Center for Security Policy once wrote, "into a hybrid of Putinist autocracy and Iranian theocracy." Last fall, he even went so far as to praise the executive powers once granted to Adolph Hitler.

Under Erdogan's leadership, our NATO ally has arrested more journalists than China, jailed thousands of students for the crime of free speech, and replacedsecular schools with Islamic-focused madrassas. He has publicly flaunted his support for Hamas and the Muslim Brotherhood while accusing long-time ally Israel of "crimes against humanity," violated an arms ban to Gaza, bought an air defense system (and nearly missiles) from the Chinese in defiance of NATO, and deniedAmerica the use of its own air base to conduct strikes during the Iraqi War and later against Islamic terrorists in Syria. As Western allies fought to help repel Islamic State fighters in the town of Kobani in Western Syria two years ago, Turkish tanks sat quietly just across the border.

In fact, there is strong evidence (compiled by Columbia University) that Turkey has been "tacitly fueling the ISIS war machine." There is evidence to show that Turkey, as Near East Outlook recently put it, allowed "jihadists from around the world to swarm into Syria by crossing through Turkey's territory;" that Turkey, as journalist Ted Galen Carpenter writes, "has allowed ISIS to ship oil from northern Syria into Turkey for sale on the global market;" that Erdogan's own son has collaborated with ISIS to sell that oil, which is "the lifeblood of the death-dealing Islamic State"; and that supply trucks have been allowed to pass freely across Turkey in route to ISIS fighters. There is also "evidence of more direct assistance," as Forbes puts it, "providing equipment, passports, training, medical care, and perhaps more to Islamic radicals;" and that Erdogan's government, according to a former U.S. Ambassador, worked directly with the al Qaeda affiliate in Syria, the al-Nusrah Front.

While Ankara pretends to take military action against ISIS, with its obsessive view of the Kurds, it has engaged in a relentless series of artillery strikes against the Syrian Kurdish People's Protection Units (YPG) that are routing ISIS troops in northern Syria. The Kurds are the largest ethnic group on earth without a homeland - 25 million Sunni Muslims who live at the combined corners where Syria, Iraq, Iran, and Turkey meet. Turkey has waged a bloody, three-decade civil war against its 14 million Kurds - known as the Kurdistan Workers' Party, or PKK - claiming more than 40,000 lives. The most recent peace process failed when Turkey again targeted the PKK, plunging the southeast of the country back into war while increasingly worrying Erdogan that Syrian and Turkish Kurds will join forces just across Turkey's border.

The Kurds, like the Turks, are sometimes seen through the lens of who they used to be, and not who they are now. In 1997, Turkey convinced the U.S. to put the PKK on its list of terrorist organizations, and Erdogan claims Syria's Kurds are guilty by association. But in fact, the YPG has worked so closely with the U.S. against Islamic terrorists that the Washington Post recently referred to its members as "U.S. proxy forces." The Kurds - whether in Syria, Iraq, or Turkey - are, by all accounts, the fiercest and most courageous fighters on the ground in the war against the Islamic State in both Iraq and Syria. What's more, the group represents a powerful alternative to the apocalyptic vision of Islamic jihadists, embodying what has been described as "a level of gender equality, a respect for secularism and minorities, and a modern, moderate, and ecumenical conception of Islam that are, to say the least, rare in the region."

The Turkish government has tried to lay blame for recent bombings in Ankara at the feet of the YPG in an attempt to sway the U.S. to oppose the Kurds. An exasperated Erdogan railed about the loyalties of the West, accused the U.S. of creating a "sea of blood" in the region by supporting the Kurds, and issued an ultimatum: he demanded that the time had come for America to choose between Turkey and the Kurds.

I couldn't agree more: the time has come for the U.S. to choose the Kurds over Erdogan's Turkey.

Critics argue that the Kurds are unwilling to take the fight to ISIS beyond their borders, but this actually presents the U.S. with an opportunity. In exchange for fighting ISIS throughout the region, an international coalition can offer the Kurds their own state. A Kurdish state would become a critical regional ally for the US and play an invaluable role in filling the power vacuum that has emerged in the Middle East. With the help of the U.S., a Kurdish state could also help to accommodate Syrian refugees that have overwhelmed immigration systems in Turkey and Europe. In the long term, it would serve as a valuable regional partner to stabilize the region, and it would set a strong example of successful democracy. In other words, Kurdistan could play the role that Turkey used to play.