At last, the Royal Navy has something to cheer about. As of today, it has a new and suitably menacing £1 billion ship which should form a central plank of Britain's defences for the next 30 years.

Yesterday morning, with the top brass assembled on a Portsmouth quayside, a chap from British Aerospace handed over the keys to one of the most advanced ships in the world and a chap in a uniform raised the Royal Navy's white ensign. HMS Dauntless is now part of the Fleet. Watch your step, Johnny Foreigner . . .

Well, actually, don't worry yourself too much just yet. Dauntless is the second of six Type 45 destroyers which have been commissioned to protect the Royal Navy from pretty much any airborne threat the world can throw at it in the near future. The only problem is that its main armament doesn't work.

The so-called Sea Viper missile system, which is being designed in partnership with the French and Italians, is proving to be more of a sea sloth. The Sea Viper system constitutes a whopping £400million of the £1 billion cost of each Type 45 destroyer. And it should have been up and running by now. 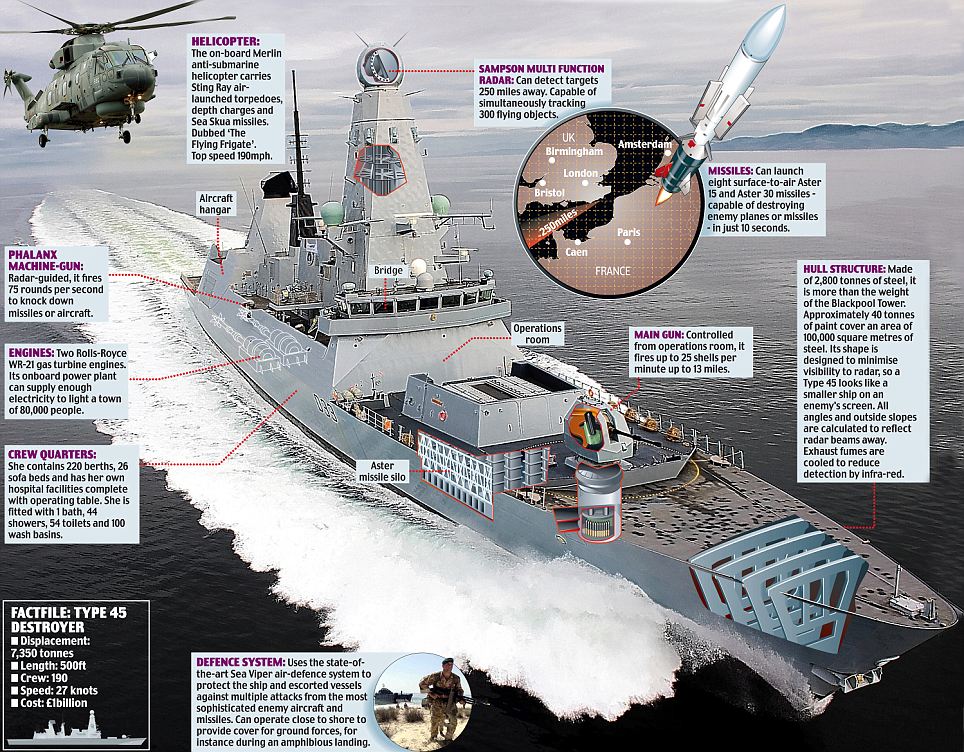 In theory, its computers should be capable of monitoring 300 aircraft or missiles at the same time and whacking 48 missiles the size of a small car at anything hostile up to 250 miles away.

If something like this had been around during the Falklands War, the entire fleet would have returned unscathed. But recent missile tests off the South of France (it's not all topless beaches and oligarchs, you know) have been disappointing to say the least.

'We understand that there have been a number of test failures which are putting Sea Viper back by months or even a year,' says Jon Rosamond, editor of Jane's Navy International magazine.

According to the Ministry of Defence, Sea Viper is simply 'undergoing a rigorous test programme to ensure that all aspects of this complex system have been thoroughly trialled'. Sea Viper's problems are in marked contrast to Dauntless itself, which has emerged from sea trials with a glowing report.

'The ship has exceeded expectations in terms of speed and fuel efficiency,' adds Mr Rosamond. 'And it certainly has some interesting features.'

These range from a 'stealth' hull design, which makes this 500 ft monster look no bigger than a trawler on the enemy's radar, to all sorts of innovative mod cons for the crew. 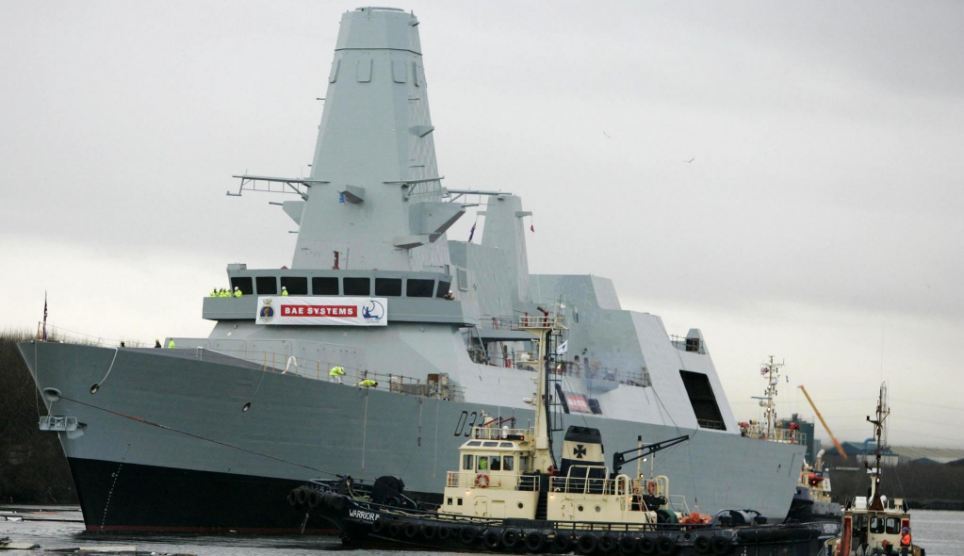 Sate-of-the-art... almost: HMS Dauntless, the second of the Royal Navy's new Type 45 class of anti-air warfare Destroyers​
Like its sister ship, HMS Daring, Dauntless is fitted with iPod chargers, internet connections and the most luxurious accommodation in any of the Royal Navy's 99 ships and four submarines.

'We have been conscious for some time that the conditions in some of our older ships are not all they might be,' acknowledges a spokesman.

Luxury, of course, is a relative concept in the Royal Navy. It means, say, six men to a cabin instead of 30 and a generous ratio of 4:1 in the loo department (or 'heads', as they say at sea).

The Type 45 is 90ft longer and twice as heavy as the Type 42 destroyer which it is replacing. The hull alone weighs more than the Blackpool Tower (even the paint weighs 40 tons) while two Rolls-Royce gas turbines drive a power plant capable of lighting a town the size of Barnsley.

But it all involves a substantially reduced crew of 190 compared to the 301 required to operate a Type 42. That means considerably more room for things like a gym and extra recreational space.

When the Sea Viper system has finally been sorted out, Dauntless and Daring - and fellow ships Diamond, Dragon, Defender and Duncan, which are at various stages of build - will be the most advanced destroyers afloat. Other firepower includes a Phalanx CIWS (Close-In Weapons System) which can fire a last-ditch bombardment of 4,500 cannon rounds per minute at anything which manages to slip past Sea Viper.

Old sea dogs will also be pleased to see that she also has a great big gun on the front. There is nothing old-fashioned about this 4.5 inch cannon, however.

It is remote-controlled and can fire 25 shells per minute on to a position 13 miles away. It has already been reported - and not denied - that at least one of these ships will be deployed in the Thames Estuary to guard the 2012 Olympics.

If so, it will certainly help to boost the Royal Navy's profile after a series of recent embarrassments. Its refusal to intervene in the recent kidnapping of the British couple, Paul and Rachel Chandler, by Somali pirates has only been compounded by some increasingly shifty excuses from the Ministry of Defence.

This episode, in turn, has echoes of the national humiliation, in 2007, when eight Royal Marines and seven sailors meekly surrendered to an Iranian gunboat in the Persian Gulf without offering resistance.

To make matters worse, two of the sailors were then authorised to sell their stories while it emerged that an Australian naval unit in an identical situation in the same waters had seen off an Iranian boarding party merely by pointing guns at them and swearing.

Traditionalists put the blame squarely at the top and say that the rot set in during the 2005 bicentenary of the Battle of Trafalgar, when the Navy insisted on staging a politically correct reenactment of Nelson's triumph. The mock battle featured a 'red fleet' and a 'blue fleet' to avoid offending the French.

That decision was taken by the (then) First Sea Lord, Sir Alan West, who accepted a peerage from Gordon Brown two years later and now sits in the Lords. After such a daunting few years, perhaps the arrival of HMS Dauntless can mark a bold new chapter in the fortunes of our Senior Service.
J

WHO needs "state-of-the-art missiles" as long they have Ipod's !??
They can brake dance against their enemies and defeat them in the brake dance !!:dance4:
Yeeah baby ! Catch that beat Royal Navy !
Bad news for Royal Navy is GOOD news ! Thanks enlightened1 this is 5***** article !
You must log in or register to reply here.
Similar threads
How Britain killed 500,000 - 3 million in Indonesia between 1965-66
Britain’s MI6 opens up to aspiring migrants spies
India has leapfrogged Britain and France to become the world's fifth biggest economy!
Britain's Daughters...
Share:
Facebook Twitter Reddit WhatsApp Link