Italy Is a ‘Mad House’ for Lottery

Italy Is a ‘Mad House’ for Lottery​ 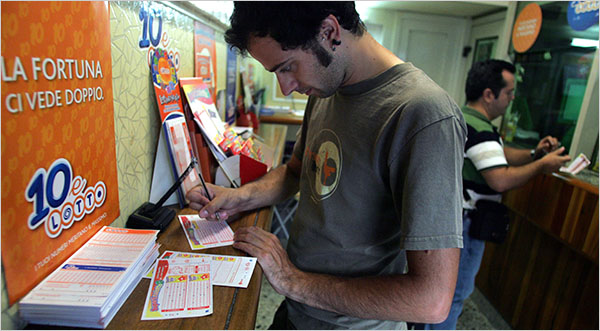 ROME — Neophytes do it. Financially pinched town councils do it. Even people who usually shun gambling as a cunning ruse for the state to raise taxes do it.

With a record €119 million jackpot at stake in Italy’s state lottery, millions have been gripped by lotto fever.

“It’s become a bit of a mad house,” said Paolo Valli, owner of the neighborhood Bar del Pino in southern Rome, where the number of wagers has tripled in the past month for the SuperEnalotto, which has not registered a winning six-number combination since January.

Although the Italian capital is emptying out, as it does every summer, draw days — Tuesdays, Thursdays and Saturdays — have been attracting small crowds to Mr. Valli’s bar. “People complain that the jackpot is too high, and that people are spending too much, but then they come in and play,” he said with a shrug.

The economic crisis and growing unemployment seem only to have fueled dreams of instant wealth. “It’s been shown statistically that numbers of bettors increase in times of economic downturn,” said Silvana Mazzocchi, who has written two books on gambling and its addictions.

Last week, the national statistics agency for Italy, Istat, revealed that almost three million Italians — just under five percent of the population — were in absolute poverty in 2008, surviving below acceptable levels.

In an unrelated report a few days earlier, the Censis social studies institute estimated that in June, Italians were spending an average of €7.8 million a day on SuperEnalotto tickets.

“I’d ban all forms of gambling, it is just another way for the state to levy taxes,” said Lucio Orlanno, an insurer who had just bought several lottery tickets at the Bar del Pino. (He won €14 on Tuesday for guessing three numbers in the lottery and said he was feeling lucky.) “I usually don’t play, only when the prize is so high, that’s when I too get the fever.”

The betting boom has raised concerns among psychiatrists and officials of the ever-present Roman Catholic church who warn that the quick-fix hope raised by gambling can lead to long-term woe.

Father Alberto D’Urso, founder of the National Anti-Usury Consultative Board, said that gambling was one of the principal motives of debt, which in turn fueled usury. “We can’t ignore the fact that thousands of people find themselves in trouble,” he said. “When gambling becomes pathological it’s not a game anymore.”

He strongly criticized the state, which gets a percentage of gambling profits, equating state-sponsored gambling games with “cocaine addiction centers run by the Medellín cartel.” Money made from gambling, he added, brought little to the economy. “You aren’t spreading your wealth around or boosting employment if you’re just buying lottery tickets,” he said.

According to news reports, some strapped town councils are even looking to Lady Luck. Earlier this week, the small Sicilian town of Ficarra, diverted money from council salaries to bet on numbers associated with the local patron saint, the Virgin of the Assumption, the news agency ANSA reported.

In Varallo, a town of 7,500 in Piedmont, the mayor convinced his five-person cabinet to cough up cash and buy a €100 ticket, which allows for several combinations of numbers. “We want to abolish taxes, pay off mortgages and, why not, bring a little happiness,” Gianluca Buonanno, the mayor, said during an interview by telephone. He said they would continue to play until the six-number combination was drawn, hopefully with his winning numbers. “We could buy some top soccer players,” like David Beckham and Alessandro del Piero, he mused. “That would put our town on the map.”