Italy buys its first three F-35s. With a shocking announcement: "a JSF will cost less

Italy buys its first three F-35s. With a shocking announcement: "a JSF will cost less than a Eurofighter Typhoon 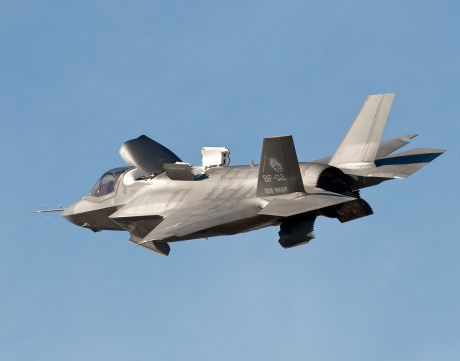 On Feb. 7, 2012, Gen. Claudio Debertolis, head of the agency that is responsible for the procurement of new armaments, has announced that Italy has already ordered the first three Lockheed Martin F-35s.


Talking to the lower house's defense commitee, Debertolis explained that these first planes will cost more than the rest of the fleet since costs are going to decrease as the program, currently in Low Rate Initial Production, continues. The Italian high rank officer is particularly optimistic, as he believes that the unit price will be around 70 million each (Lockheed Martin estimates 65M USD for the F-35A and about 73M USD for the F-35B), less than the 79 million USD currently paid for the Eurofighter Typhoon and much less of the 121 million USD per aircraft anticipated in 2011.

Quite surprising, since unit price is one of the JSF partner's main concern, but possible, considering also that the Typhoon has just lost India's mother of all tenders based on price.

Although there's no official commitment yet, the initial requirement for Italy foresaw 131 examples (69 conventional take-off and landing F-35As and 62 of the short take-off and vertical landing variant F-35Bs). Debertolis confirmed that determining how many aircraft Italy will purchase is not a current task, since it will depend on the Defense Budget Review. Nevertheless, even if the number of aircraft will be much lower than the initial 131, the MoD will work to make sure that the industry will get the expected compensation.

Italy is working on stretching deliveries and slowing purchase "a much easier task than that with the Eurofighter program, since the F-35 procurement is modular therefore delays don't imply increasing costs" Debertolis said.

Furthermore with the recent Eurofighter defeat in India, Italy is going to stop working on the Typhoon and "divert" part (if not all) of its workforce towards the F-35, being assembled at the Cameri FACO (Final Assembly and Check Out) facility.

Finally, Debertolis has confirmed that Italy will have both A and B variants, with the STOVL (Short Take Off Vertical Landing) ones serving both the Air Force and the Navy, that will use them on the Cavour aircraft carrier.

In spite of the widespread criticism surrounding the program and the global financial crisis it looks like the F-35 has, if not a bright future ahead, at least good chances to survive the austerity measures of the new Monti's technocratic cabinet.

Italy buys its first three F-35s. With a shocking announcement: "a JSF will cost less than a Eurofighter Typhoon" | idrw.org
Last edited: Feb 15, 2012

Hmm... don't bet against US companies = Moral of the story. all those predictions of its cost 120 miliion plus , heh. A 5th gern aircraft cheaper than 4th gen aircrafts, WITH US ew package to boot.

That's old article showing up today's date, sometimes for some unknown reason it shows up like that? That reads like something I've read someone post the same here weeks back. No price is mentioned on that article.

would the guys buying it not know what the price is? article clearly states that assumptions were wrong.
Last edited: Feb 15, 2012
A

If the F-35 is able to manage its cost then there's no doubt that's it's a clear winner. And I think all indications point to it winning. That's why France is no longer bothering to develop an equivalent Fth gen fighter.

Armand2REP said:
Cost escalation of F-35 hasn't even stopped, so cost reduction due to numbers will be minimal. Look for a final tag of $120 million... 70-80 is a dream.
Click to expand...

So the italians who are paying for it are lying is basically what your crystal ball says, got it.

It has nothing to do with the Italians... it has to do with Lockheed cost estimates. cough F-22 cough

Armand2REP said:
It has nothing to do with the Italians... it has to do with Lockheed cost estimates. cough F-22 cough
Click to expand...

How does F22 , soley for americans have to do with cost estimates of F35 that includes more buyers? Cough volume cough JSF investments cough

With the volumes committed to JSF, there has to be some cost benefit to LM. I guess we will have to wait for the serial production to start for the final costs to be known.

We however should also bear in mind that these cost comments are from a very senior official in the Italian Defence Services. He does not have anything to gain from giving a false report.

Eurofighter in Belgium and Germany in the 2020s is still in alert + in Spain and UK.

asianobserve said:
If the F-35 is able to manage its cost then there's no doubt that's it's a clear winner. And I think all indications point to it winning. That's why France is no longer bothering to develop an equivalent Fth gen fighter.
Click to expand...