Italian prime minister Silvio Berlusconi's long-suffering wife Veronica Lario is to seek a divorce after running out of patience with his roving eye, newspapers report.

The 72-year-old Berlusconi himself has refused to comment on the details of the reports but acknowledges he is going through a "painful" period in his private life after nearly 30 years of marriage.

A government source later stressed Berlusconi had not been asked to react to "a concrete event, such as divorce papers".

"Veronica's choice: Farewell Silvio," said the front page headline of La Stampa, while the rival la Repubblica led with the headline: "I've decided, I want a divorce," with both papers quoting close friends.

In the picture Veronica has just let him have it in the right place with a piece of concrete. 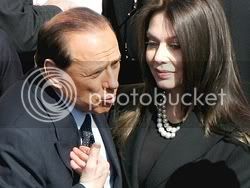