Italian police write off one of their own £150,000 Lamborghini Gallardos!!!

The £150,000 Gallardo super car which was just a year old and complete in blue and white police colours, was involved in a smash after being cut up.

Two officers inside the 560 horse power car - complete with mini fridge used to transplant organs - suffered minor injuries in the accident which happened near Cremona. 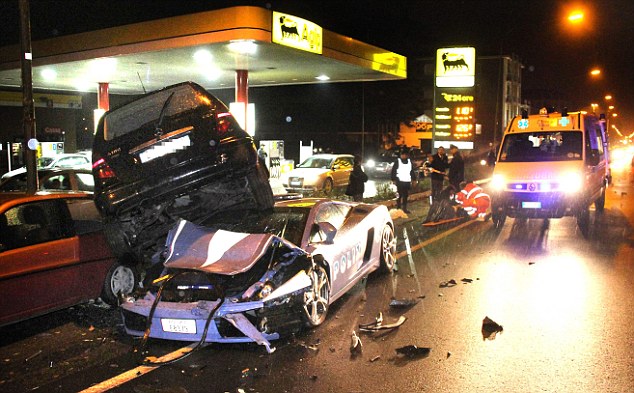 Italian police were left red-faced after a prized 200mph Lamborghini used for high speed chases smashed into a driver leaving a petrol station. The 520-horsepower supercar, one of only two donated to Italian traffic officers, was written off in the crash near Cremona, Italy. The Gallardo model had been travelling on routine enquiries when a careless motorist pulled out suddenly on to the road. The specially trained driver of the Lamborghini was forced to swerve to avoid the unthinking motorist ploughing into nearby parked cars. 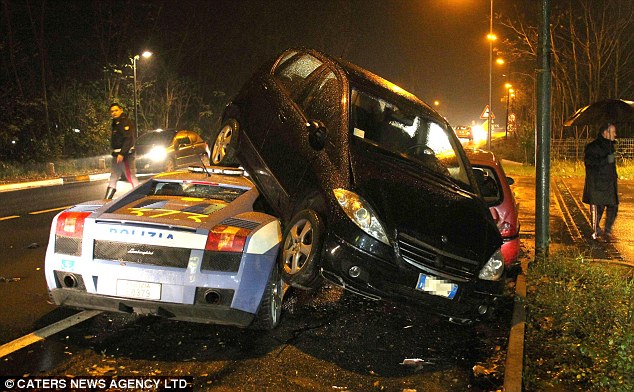 The high-performance car is worth £150,000 and was donated to the police force by the Lamborghini factory​
A spokesman said the Lamborghini was cut up by another motorist who was leaving a petrol station and the officer at the wheel swerved to avoid it and hit another car but the driver was unhurt.

Italian police began using the Lamborghinis four years ago in a bid to clamp down on speeding motorists as it can reach 204mph.

The one involved in the smash was based in Bologna with the other in Rome.

The cars were donated by Lamborghini and tonight no-one from the classic sports car company was available for comment.

Italian police also used Ferrari and Porsche cars seized from Mafia criminals but in the summer announced they were scrapping them because they could not afford the maintenance costs.
The 2-seater Lamborghini Gallardo, using a V10 cylinder DOHC four valve V90 5 litre, 500HP engine, can reach a top speed of 192mph