ISRO to put Algerian satellites into orbit by 2010

ISRO to put Algerian satellites into orbit by 2010


BANGALORE: With the US clearing the decks for the Indian Space Research Organisation (ISRO) to launch Algerian Satellites with American components, the space agency is planning to put the satellites in orbit by the end of 2009 or early 2010.

The clearance given to launch the Algerian satellites ALSAT-2A and ALSAT-2B -- which have US components on board an Indian space launch vehicle -- comes after the signing of the Technical Safe Guards Agreement (TSA) between the US and India during US Secretary of State Hillary Clinton’s recent visit to the country.

“Now that the clearance has been given, we plan to launch the Algerian satellites from the Satish Dhawan Space Centre by the end of the year or early next year if the weather permits,” ISRO spokesperson S Satish.

He added that the space agency’s main priority is to launch the Oceansat- 2 in September followed by the GSAT-4 onboard the GSLV in Octobe or November.

The TSA gives an opportunity for the launch of foreign built non-commercial satellite and not the heavy commercial ones which will require India and the US to sign the commercial space launch agreement (CSLA) which is likely to be signed between India and the US during Prime Minister Manmohan Singh visit to Washington next month.

ISRO will also launch the Swiss Cube, a mini satellite built by Swiss students later this year; which will be launched by PSLV. The project manager of the Satellite project Muriel Noca along with the Swiss Astronaut Prof Claude Nicollier are currently touring Indian cities, including Bangalore.

The primary objective of developing this satellite is to provide a dynamic and realistic learning environment for our staff in the development of small satellite technology, said Noca.

On the Algerian optical observation satellites ALSAT-2A and 2B: 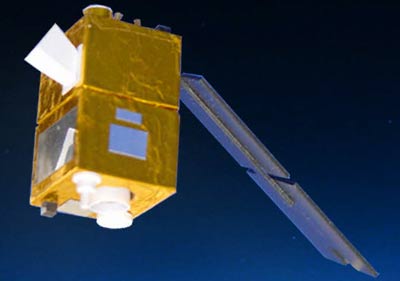 EADS Astrium has signed in February 2006 a contract with the Algerian National Space Technology Centre (CNTS) for the development of the ALSAT-2 system, which consists of two optical observation satellites. ALSAT-2 is the first Earth observation satellite system from the AstroSat100 family to be built using the Myriade platform.

The ALSAT-2 contract covers the design and development of two satellites. The first, ALSAT-2A, will be integrated and tested in France at EADS Astrium, whereas the second, ALSAT-2B, will be integrated in Algeria within the small satellite development center (UDPS) in Oran. The ALSAT-2 programme also includes the construction of two ground control segments and one image station allowing the satellites to be operated and controlled from Algerian territory.

ALSAT-2 is equipped with a latest-generation payload capable of supplying images with a resolution of 2.5 meters in panchromatic mode and 10 meters in each of 4 colour bands in multispectral mode. It draws on EADS Astrium’s extensive experience in Earth observation, most particularly with respect to the silicon carbide telescopes which are being integrated onto a Myriade class satellite platform which was designed in cooperation with CNES, the French Space agency.

The CNTS, affiliated with the Algerian Space Agency (ASAL), will be responsible for managing the ALSAT-2 programme and operating the satellite system.

The system will enable Algeria to obtain very high quality images for use in a wide variety of applications: cartography, management of agriculture, forestry, water, mineral and oil resources, crop protection, management of natural disasters and land planning.

A.V. said:
rage the post is already made by nitesh sir on the isro developments thread
Click to expand...

My apologies A.V. da. Could I ask you to keep this thread independent for further developments on the venture? I plan also on putting the video of the launch, once it takes place, if I can get my hands on it.
I

It looks like the pm was right when he told that our relations with other countries will depend on economic imperatives. The chinese might as well lose out on this market to us, when the csla gets signed soon.
You must log in or register to reply here.
Similar threads
Isro developing technologies to put human payload into space
A Brief History of Indian Orbital Rockets
Hybrid hypersonic space launch vehicle -ISRO- DRDO News and discussion.
NASA-ISRO Synthetic Aperture Radar (NISAR) mission
Share:
Facebook Twitter Reddit WhatsApp Link