Abdus Salem killed said:
Disgusting if this was any other country they would be shot and hanged
Click to expand...

It's actually quite common in Kerala
Workers unionfags ask money just for standing around some construction sites as "Nokkukooli"
Commies, Congies & BJPees are no exception
But 10 Lakh Rupees is outrageous, itna toh yaha pe pura ghar ban jata hai
Some 500-1000 per head would be more sensible, I'm justifying the bribe since these guys are basically like parasites, they squat in front of you until they get their moneis

ISRO should shift their centre some where else there should be mass boycott of such parasite infested shithole state.

Hard to believe two years have gone by since that fateful day, Sept 6/2019, when millions of people were eagerly awaiting the news of the Vikram lander. But the hopes were dashed, after a narrow miss. The failure overshadowed the huge success of the Chandrayaan-2 orbiter, which is expected to last 7 years, after the initial projected one year. ISRO will do a successful landing in the near future, no doubt.
Last edited: Sep 7, 2021

no failure analysis report made public

such is the "transparency" of ISRO...
A

This means ISRO not releasing cy2 images to public.
Click to expand...

chetan_chpd said:
and still- no images of lander crash site by "most powerful camera ever in orbit" onboard CH-2

no failure analysis report made public

such is the "transparency" of ISRO...
Click to expand...

That actually is a little fishy.
M

Image seems not high resolution. While zooming pixels broken. May be they are not releasing real images.
V

Also, without of course revealing any classified information- there still hasn't been a nice, detailed description or assessment of all the technology aboard the Vikram lander, that did work in its ill fated mission. We know that the 800N thrusters worked well, though one of the five appeared to have malfunctioned in the descent phase. What about mechanical systems, electronics, thermal management... Did Vikram take any pics of the moon as it descended? ISRO could be a little more public about these things!

India’s Chandrayaan-2 spacecraft, which has completed more than 9,000 orbits around the Moon, has detected minor elements of chromium and managanese through remote sensing, officials of the Indian Space Research Organisation (ISRO) said on Monday.

According to a statement from ISRO, the eight payloads onboard Chandrayaan-2 are conducting scientific observations of the Moon by remote sensing and in-situ techniques. 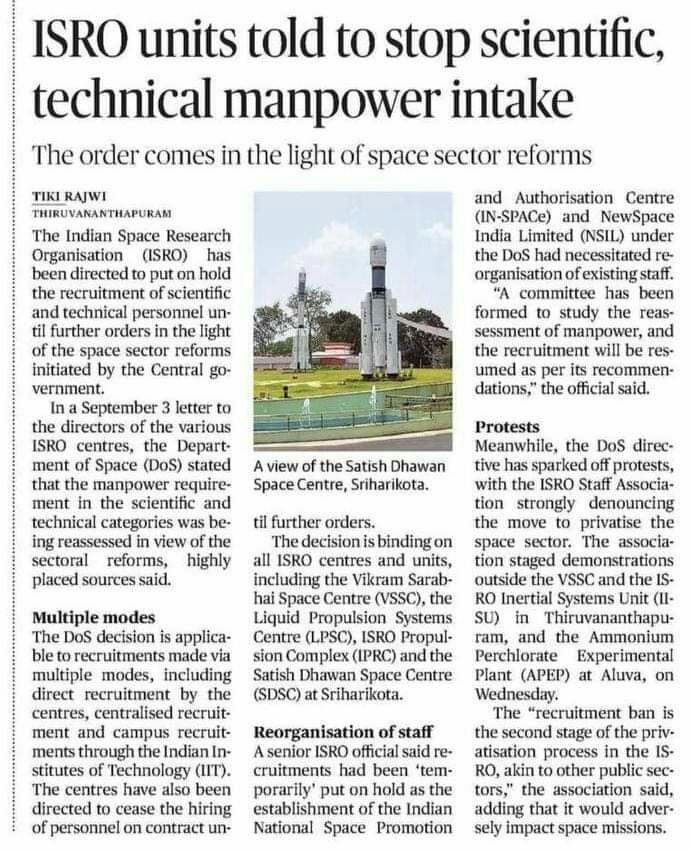 Indx TechStyle said:
We once built a boiler and heat exchangers set in Gujarat and it took us bloody 8 months to reach Odisha. Throughout the entire route, we jammed routes, we had to remove electrical cables and poles in many areas.

At a place when a flyover bridge was not high enough for the heat exchangers loaded on our truck, we had to take permission of authorities to dig up road to cross that.
Click to expand...

Sir if you don't my asking, who are WE here?

Ha…I predicted this. This government is not going to tolerate ISRO’s mediocre performance. They know that ISRO has fallen behind others considerably. With SpaceX well positioned to corner small payload the launch market and the massive Antrix debacle ($1 billion lawsuit by Devas), the writing is on the wall for ISRO. Neither have they been able to foster a good open source community like their western counterparts to keep citizens engaged, nor have they been able to develop talent to engineer sophisticated projects. ISRO has achieved what they could with the current talent and heavy support from the Russians. For ISRO to get to the more sophisticated technologies, the entire organization and leadership must change. ISRO needs to study how NASA, ESA and JAXA are able to work effectively with the private sector to create sophisticated space technology. ISRO also has to become a lot more transparent - especially they way they publish data for broader scientific community to make use of it. Finally, ISRO must execute programs and applications in a timely manner. NAVIC is still not finding the adoption rate it should be. The Google earth like service has been a total flop. And space education and talks by ISRO professionals at schools and universities has been pathetic - they have not lit the flame of scientific fervor in our country.
It is good that the government has finally realized that ISRO has badly let down the country. And that a complete overhaul of the organization is needed.

This is a quote by a long time ISRO person with deep knowledge of everything inside ISRO:
Jayakumar’s profile: https://www.quora.com/profile/Jayak...533&share=d9933b0c&srid=IU6B&target_type=user

Jayakumar Chandrasekharan says “ Even though I am from ISRO (retired), I have to admit your point that spaceX is far advanced than ISRO. Let me give a short history of ISRO.

As you know ISRO was an autonomous body under Department Atomic Energy. It was established by Bhabha and Sarabhai in Thumba. The main purpose at that time was to study the magnetic equator passing over Thumba. TERLS was established for launching sounding rockets, and was dedicated to United Nations later.

The project SLV-3 was approved first with a small budget and you know Kalam was the director for the project. ASLV, PSLV, GSLV, GSLV MKIII , RLV followed. Thus ISRO’s growth was gradual, and over 40 years, unlike SpaceX which started with a Big Bang.

India is always behind west by about 50 years in technology and manufacturing. We are behind Japan and China also. We are not self sufficient either in manufacturing technology or materials in Higher technology area. Even Cars manufactured in India have some import content.

In Rocket technology also such constraints are there. The developed nations simply deny us the technology or material. Therefore We have to innovate and find methods and materials to overcome these abrupt refusals. Remember the accident in which a malfunction of a simple O ring blasted the rocket along with Astronauts.

These type of constraints are not applicable to SpaceX. They have advanced technology, advanced materials, sufficient qualified and experienced personnel and moreover limited controls being a private company.

We are yet to master cryo technology fully, even though we have made cryo engines for upper stages and satellites. “

And you can see the upvotes by ISRO scientists and engineers to the above quote. ISRO simply does not have advanced talent. They are still unable to master cryogenic technology for heavy launches. And that is a fact.

“ Yes. Government has advised ISRO to stop recruitments for scientific and technical posts.”

This observation alone says that the government has lost confidence in ISRO. It was bound to happen as ISRO is yet another PSU unable to compete with current talent. Over and out.
You must log in or register to reply here.
Similar threads
Hybrid hypersonic space launch vehicle -ISRO- DRDO News and discussion.
GOOD NEWS: ISRO gears up to test scramjet engine
Join ISRO/DRDO/HAL/NAL If You Care About The Nation - News & Discussions.
ISRO chairman Madhavan Nair awarded doctorate by IIT-Bombay news
Share:
Facebook Twitter Reddit WhatsApp Link