Israeli students are planning a "peace flotilla" to Turkey with humanitarian aid for nations who suffered under Turkish imperialism – the Kurds and Armenians. The initiative comes in response to the world's sharp criticism of Israel's lethal raid on the Gaza flotilla which left nine activists dead and many wounded.

The organizers are currently seeking a suitable vessel and trying to recruit other students to the cause. No date has yet been set, but a skipper has been found: Arik Ofir, a member of the navy veteran's union and owner of a private business. They have also obtained medical supplies, and hope that by the end of the week they will be able to set out.

"The whole world saw the flotilla and thought Israel is a terrible state, which comes to shoot people who call themselves peace activists," said Chairman of the National Students Union Boaz Torporovsky, who is also involved. "It's absurd that they always put the Israeli occupation in the headlines and don't talk about extreme Islamic terror. There's a lot of hypocrisy in the world.

"Turkey, which leads the campaign against Israel and makes all sorts of threats is the same Turkey that carried out a holocaust and murdered an entire nation of Armenians, and oppresses a minority larger than the Palestinians – the Kurds – who deserve a state, who have demanded a state for longer than the State of Israel has existed." 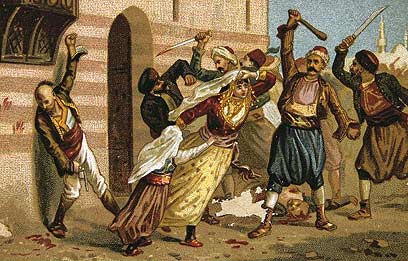 Ottoman massacre of Armenians according to a 19th century etching (Photo: Visual/Photos)

"For this reason," he continued, "we have decided to help that minority and show up the hypocrisy of the Turkish government. We are sure that they won't care if we sent humanitarian aid. It'll be a peace flotilla without the knives or stones that hurt IDF soldiers, without violence, which is intended for all those oppressed by the Turkish government.

"If (Prime Minister Recep Tayyip) Erdogan's heart is where his mouth is, which we all know isn't so, he has no reason to prevent the flotilla from arriving."

And what about the practicalities? "For the flotilla to work, we need three elements: Money, logistics and balls," he said. "We're bringing the balls and some of the logistics, but we need lots of money."

The National Student Union has been active in PR for a long time. Torporovsky even infiltrated into a UN conference once, and slammed Iranian President Mahmoud Ahmadinejad, an incident which received extensive coverage around the world.

Student representatives even got in contact with Iranian students oppressed by the regime in an attempt to raise awareness about what is happening in Iran.
A

Now that is called pressing the aching nerve.Israel instead of attacking Turkish flotilla should have organised this move long back....

This is just Israeli propaganda to malign Turkey of something that happened ages ago, to deflect blame. This is typical Israel. If its intentions were genuine, it would have organised this peace flotilla earlier.
You must log in or register to reply here.
Similar threads
Israeli govt to recruit students as undercover agents on social media
Israeli students in India
Israeli Army Accidentally Reveals Secret Bases in Online Map
Israeli Intelligence Agencies Shabak and Mossad
Share:
Facebook Twitter Reddit WhatsApp Link