ERUSALEM—The Israeli security establishment is divided over whether it needs Washington's blessing if Israel decides to attack Iran, Israeli officials say, as the U.S. campaign for sanctions drags on and Tehran steadily develops greater nuclear capability.

Some senior Israeli officials say in interviews that they see signs Washington may be willing to live with a nuclear-armed Iran, an eventuality that Israel says it won't accept. Compounding Israeli concerns were U.S. statements this past weekend that underscored U.S. resistance to a military option. Defense Secretary Robert Gates on Sunday discussed a memo to National Security Adviser James Jones warning that the U.S. needed new strategies, including how to contain a nuclear Iran—suggesting that Iran could reach nuclear capability without any foreign military force trying to stop it.

Adm. Mike Mullen, chairman of the Joint Chiefs of Staff, reiterated Sunday the U.S. position that a military strike against Iran is a "last option."

Israel says it supports the U.S.-led push for new economic sanctions against Iran. But Israeli officials have increasingly voiced frustration over the slow pace of diplomatic efforts to get sanctions in place.

Relations between the two allies have soured in recent weeks, with Prime Minister Benjamin Netanyahu's government pushing back against Obama administration pressure to freeze building in Jewish areas of East Jerusalem, which Washington says is counterproductive to its Mideast peace efforts.

In another sign of a split, Israeli officials say they believe Iran—whose president has called for the destruction of Israel—could develop a warhead to strike the country within a year if it decides to, though outside experts say such capability is years away. Tehran says its nuclear program is for peaceful uses.

Such divisions have played into fears in Israel that if Washington's sanctions effort fails, the Israeli and American positions on Iran could rapidly diverge—and Israel, if it chooses to attack Iran, would have no choice but to do so on its own.

U.S. commanders say an attack would invite retaliation by Iran against American military interests in the region, or wider terrorist attacks by Iranian proxies Hezbollah and Hamas. Adm. Mullen said Sunday a strike could have "unintended consequences," and has long warned it could destabilize the region at a time the U.S. has troops in Iraq and Afghanistan, which neighbor Iran.

A senior U.S. official said the U.S. has stated to Israel its opposition to unilateral Israeli action, but that there were still fears within the administration that Israel could strike Iran despite Washington's objections.
Military Options 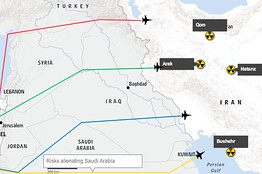 If Israel chooses to attack nuclear facilities in Iran against
Washington's objections, politics will play a role in military strategy.

Some Israeli officials worry a unilateral strike would cause a break with Washington that would threaten Israeli national interests even more than a nuclear-armed Iran.

Israel's track record of coordinating such strikes with the U.S. is mixed. The country caught the U.S. by surprise with its attack on Iraq's Osirak reactor in 1981. When Israel attacked a suspected Syrian nuclear facility in 2007, Washington was given advanced warning, according to U.S. officials at the time.

The decision of whether to strike Iran ultimately rests with the prime minister, Mr. Netanyahu. In the past, however, senior military commanders have had significant say in such decisions. A spokesman for Israel's Ministry of Defense declined to comment on internal deliberations concerning Iran.

There are a number of routes Israeli attack jets can fly to attack Iran. They all would require Israeli planes to fly through U.S.-controlled airspace in Iraq or through the airspace of U.S. allies such as Saudi Arabia or Turkey, which could cause serious political consequences for Israel.

Many Israeli military experts say Israel can easily cope with any military retaliation by Iran in response to a strike. Iran's medium-range rockets would cause damage and casualties in Israel, but they aren't very accurate, and Israel's sophisticated missile-defense system would likely knock many out midflight. Israel has similarly proved it can handle attacks against Israel by Hezbollah and Hamas. Israel also hosts a contingent of U.S. troops attached to a radar system to help give early warning against incoming rocket attacks.

More worrying to Israeli strategic planners examining possible attack scenarios is the possibility that Iran would respond to an Israeli attack by ramping up support to groups battling U.S. troops in Iraq and Afghanistan, according to recently retired officials familiar with the military's thinking on Iran. If American soldiers start dying in greater numbers as a result of an Israeli unilateral attack, Americans could turn against Israel.

Iran could also disrupt the world's oil supply by cutting off exports through the Persian Gulf, roiling international oil markets.

"What will Americans say if Israel drags the U.S. into a war it didn't want, or when they are suddenly paying $10 a gallon for gasoline and Israel is the reason for it," says retired Brig. Gen. Shlomo Brom, former director of the Israeli army's Strategic Planning Division.

Former senior members of Israel's defense establishment have weighed in recently on both sides of the debate.

"We don't have permission and we don't need permission from the U.S.," says Ephraim Sneh, who served as deputy minister of defense under former Prime Minister Ehud Olmert. But Maj. Gen. Giora Eiland, a former national security adviser, says Israel wouldn't jeopardize its relationship with the U.S. by launching a military strike against Iran without an American nod.

"Only we have the exclusive responsibility when it comes to the fate and security of Israel, and only we can determine the matters pertaining to the fate of Israel and the Jewish people," Mr. Barak said. "But we must never lose sight of how important these relations are, or the ability to act in harmony and unity with the United States."