The UK's Sunday Times newspaper exposed what it claims are new details on what Syria states are "Israeli espionage measures" planted on Ant Island – a tiny island opposite Syria's Tartus Port.


According to the report on Sunday, divers from 'Shayetet 13', Israel's elite naval commando unit installed the equipment. They approached the island from one of the country's German-built Dolphin class submarines, which are armed with nuclear cruise missiles.


In early March, Al-Manar, a pro-Syrian Hezbollah affiliated television station in Lebanon, reported that the "rocks" could track and film Russian warship movements and instantly transmit pictures back to Israel by satellite.

Syria's state-run television showed a camera, a satellite dish and other objects including batteries and cables secreted among several imitation rocks.

According to the report in the Sunday Times, the commandos had apparently visited the island earlier to obtain samples so the color and shape of local rocks could be matched and the right position for the monitoring station established.

Under cover of darkness the frogmen ferried the equipment on two inflatable dinghies equipped with silent outboard motors to Ant Island where they spent several hours installing it, disguising it and ensuring that the satellite links were operational.

The report claims that the commandos' immediate problem was not so much being spotted by the Syrians as the risk of detection by "friendly" patrols from the US Sixth Fleet and a British monitoring station in Cyprus that keeps a close watch on the Syrian coastline.

It is not known how long the monitoring station operated before it was uncovered. A senior Syrian security official said the equipment was highly intricate and as well as tracking ships could also keep tabs on Syrian troop movements.

Russia leased the Tartus facility in a deal in 1971 under which a multibillion-dollar debt was written off. Several Russian warships have docked at the port in recent months.

Vice-Admiral Viktor Chirkov, the Russian naval chief, stressed recently that Tartus was "essential to us"

Spy equipment discovered near Russian military base in Syria​

Sophisticated intelligence-collection devices hidden inside faux boulders have been discovered on an island situated across from a Russian naval base in Syria. The devices were found on Al-Naml, an uninhabited islet of only 150 square meters, which overlooks the Syrian port of Tartus, site of a major Russian naval military facility. 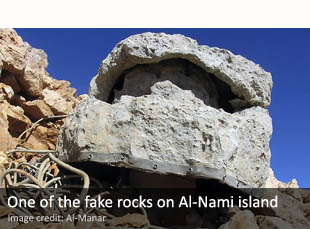 The devices were found on Al-Naml, an uninhabited islet of only 150 square meters, which overlooks the Syrian port of Tartus, site of a major Russian naval military facility. According to Al-Manar, a satellite television station affiliated with the Lebanese Shiite militant group Hezbollah, the fake boulders were carefully placed on Al-Naml by Israeli commandos during a nighttime operation.

Television images showed a system of satellite dishes and cameras, which appear to be connected to custom-made batteries via a series of cables. The imitation boulders, which conceal the electronic surveillance devices, seem to have been carefully designed in order to blend in with the surrounding rocks and brushes on Al-Nami. Al-Manar said on its website that at least three such devices were "discovered by local fishermen". It added that the camouflaged contraptions appear to be aimed at tracking the movements of Russian vessels sailing to and from Tartus. Moreover, the devices appear to be capable of transmitting pictures of vessels to Israel in real time, via satellite.

The naval base at Tartus was first leased to the Soviet Navy by the Syrian government in 1971. In response, the Kremlin forgave a multi-billion dollar debt owed by Damascus. Today, Tartus constitutes Russia's sole military facility situated outside the regions of the former Soviet Union. It is also Russia's only naval base in the Mediterranean, and many strategic analysts consider it as the primary geopolitical justification behind Moscow's support for the regime of Syrian President Bashar al-Assad.

No information has been released about how long the espionage devices were present on Al-Nami before their discovery last week. In early March, media affiliated with the government of Syria accused Israel of planting a number of spy devices disguised as rocks, which were found near "sensitive sites" in the country.

The government-owned Syrian Arab News Agency, which published photographs of the alleged spy devices, said they were discovered at an unspecified region on Syria's Mediterranean coast. Video footage and photographs showed what appeared to be large-sized faux rocks. Nestled in their hollow interior were cameras, microphones, transmission devices, as well as large batteries, which seem similar to those discovered on Al-Nami last week.

Spy equipment discovered near Russian military base in Syria | intelNews.org

Looks like Israel wants to be a major prick in the already muddied waters of the Middle East.
W

pmaitra said:
Looks like Israel wants to be a major prick in the already muddied waters of the Middle East.
Click to expand...

Israel in this intel mission was being prudent, I believe. Why the pejorative remark?

W.G.Ewald said:
Israel in this intel mission was being prudent, I believe. Why the pejorative remark?
Click to expand...

Not a great fan anybody who directly or indirectly tries to help Wahhabi fundamentalists. As far as the Syrian crisis goes, I do hold a very negative opinion about Israel. My concerns are not unfounded. If Assad falls from power, I would pray for the Christian and Alawaite minorities in Syria.
W

Not a great fan anybody who directly or indirectly tries to help Wahhabi fundamentalists.
Click to expand...

Don't see the connection between the Israeli action and aid to wahhabis, or why UK Sunday Times is wetting itself over it.

In early March, Al-Manar, a pro-Syrian Hezbollah affiliated television station in Lebanon, reported that the "rocks" could track and film Russian warship movements and instantly transmit pictures back to Israel by satellite.
Click to expand...

Syria via Hezbollah has had its fingers around the throats of Lebanon too long.
Last edited by a moderator: May 10, 2015

W.G.Ewald said:
@pmaitra
Don't see the connection between the Israeli action and aid to wahhabis, or why UK Sunday Times is wetting itself over it.

Syria via Hezbollah has had its fingers around the throats of Lebanon too long.
Click to expand...

Russia isn't threatening Israel. Israel therefore has no business spying on a Russian base. Israel's only motive, that I could think of, is to pass on intel to the Wahhabi rebels, so that they can launch attacks on Russian ships. Israel itself won't take on Russia, but they could definitely use some entity that has experience in this area. The picture below should give proof of such experience:

Also, don't forget that Israel has started rebuilding ties with Turkey, a key ally of the rebels in Syria.
Last edited by a moderator: May 10, 2015
W

1. The wahhabi connection is speculation.

I said directly or indirectly.

Israel might not be directly helping al-Qaida, but they are surely seeking what the Wahhabis and al-Qaida are seeking. Even that is no speculation.

Now, I am not in any way in favour of Hamas attacking Israel, but if I had to chose between Assad and the Wahhabi-al-Qaida mish-mash, I am quite certain I see Assad as the better of the two.


W.G.Ewald said:
2. Bibi made up with ErdoÄŸan because Obama told him to.
Click to expand...

I still await an explanation from Kerry or anybody else as to why Assad must go.
A

pmaitra said:
Looks like Israel wants to be a major prick in the already muddied waters of the Middle East.
Click to expand...

Intel is an invaluable tool in preventing misunderstandings that could lead to shooting war, by knowing what the other one is doing or intending to do.
W

asianobserve said:
Intel is an invaluable tool in preventing misunderstandings that could lead to shooting war, by knowing what the other one is doing or intending to do.
Click to expand...

Would there have been an outcry in the UK Sunday Times if satellite had been used to develop the intel? Of course not.
A

I think the attention to this spy gadget stunt is principally a result of the current political and military sensitivity of the area. Any spy contraption from the West or Israel that is discovered or shoot down around that area will surely generate the same interest to the media. In any case, to me that fake boulder looks "too fake." Whoever painted that thing did a sloppy job of copying the color of the surrounding rocks of the area where it was placed. Maybe this one of the reasons that that gadget was discovered.
Last edited: Apr 8, 2013

Israel is in a lose-lose situation wrt Syria. The only win is if there is a very long civil war.
Or am I mistaken ?

Every country spies on every other country.
W

dhananjay1 said:
Every country spies on every other country.
Click to expand...

It's attributed to President Herbert Hoover's Secretary of State Henry L. Stimson, who in 1929 shut down the office in the U.S. State Department responsible for breaking codes to read messages sent between embassies of other countries and their capitals.
Click to expand...

He served as Secretary of State under President Herbert Hoover from 1929 to 1933. In 1929 he shut down the State Department's cryptanalytic office saying, "Gentlemen don't read each other's mail." (He later reversed this attitude.)
Click to expand...

Most countries would do the same thing, Israel has learned from India if you
don't watch the neighbors one day your neighbors will be pointing nukes at you
(Tibet,China,Pakistan and soon Iran not pointing at India yet) and others with
anti-Indian stance Nepal,Sri Lanka,Bangladesh etc.. Regime change many times
is for the better for those that execute it properly.
You must log in or register to reply here.
Similar threads
Israel Won't Stop Spying on the U.S.
Spy Fail: Why Iran Is Losing Its Covert War with Israel
US sees Israel as spy threat
Israel Is Using American Stealth Choppers To Ferry Iranian Spies Into Iraq
Share:
Facebook Twitter Reddit WhatsApp Link