For the Inter-Service Intelligence (ISI), the intelligence wing of the Pakistani military, the Punjab problem didn't ever end; the constant efforts to use pro-Khalistan leaders all over the world and create trouble in the state continues.

As part of the effort, two gunmen, Ramandeep Singh and Hardeep Singh Shehra, financed and trained by terrorist organisations, aided by the ISI have committed a number of crimes in the state. 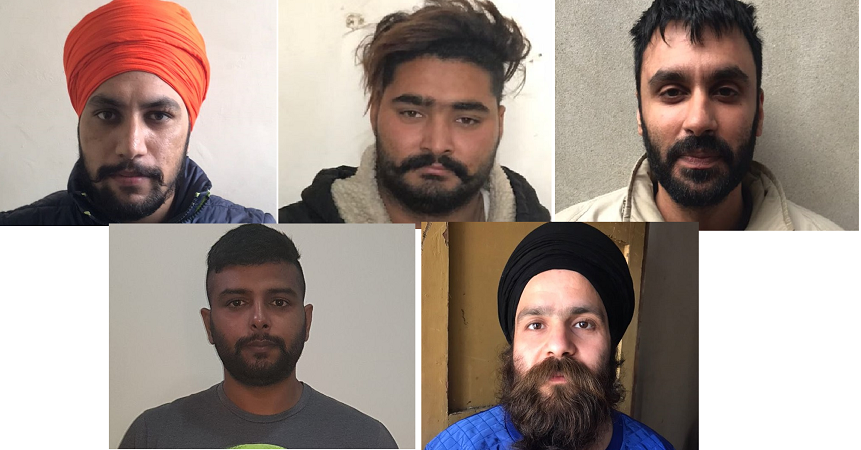 Before they were finally arrested, they had killed seven Hindu or Sikh leaders in the state. Their objective, according to a confidential government document was to "destroy communal harmony and social fabric of Punjab and to terrorize and create intense fear among the Hindu population. This all was done as per the designs of the ISI to destabilize the Punjab government."


Ramandeep and Hardeep Singh were the motor-cycle killers. They used stolen motor-bikes, of course. And after the murder, get rid of them. They killed:

* Durga Das Gupta, president of the Labour Service Wing of the Shiv Sena in Punjab on 23rd April 2016 in Khanna

*Brigadier Jagdish Gagneja, the state vice president of the RSS on 6th August 2016, in Jalandhar

*Amit Sharma, the zillapracharak of the Hindu Takht in Ludhiana on 14th January 2017

*Satpal Kumar and his son, Ramesh Kumar, both followers of the Dera Sacha Sauda on 25th February 2017, in Khanna

*Ravinder Gosain of the RSS on 17 October 2017 in Ludhiana

One of the masterminds of this operation, top government sources said, is radical leader Gursharanbir Singh, a British national. He brought Ramandeep and Hardeep Singh together in December at the Gurdwara Dukh Niwaran Sahib in Ludhiana. He told them to kill Hindu leaders. They were to use stolen motorbikes for the crimes. Gursharanbir Singh, of 3, Wentworth Drive, Coventry has been a terror leader for a decade.


He planned the killing of Rulda Singh, president of the Rashtriya Sikh Sangat in 2009. One of his associates was the UK-based Paramjit Singh Pamma. Based on evidence provided by India, both were arrested but released on bail. Pamma was detained by the Portugal police in December 2015 but after a save Pamma campaign, the British government helped to get him back to the UK, top government sources said.

Three arrests in India helped to crack the case:

* Tarlok Singh Sandhu (Laddi) was arrested in India on June 13, 2016, under the Arms Act. He was in possession of a pistol. He admitted that Taljeet Singh Jimmy, his UK based cousin, had given him money to buy weapons.

*The search began for Jimmy. He was caught at the Indira Gandhi International airport on 31 October 2017, trying to enter India. During his interrogation, he admitted that a Jagtar Singh Jaggi Johal gave him 3000 British pounds to buy weapons. He had sent the money to India. Jimmy made another important point: Jagtar Singh Jaggi Johal was already in India, to get married.

*Johal, a British national, was arrested in Jalandhar on 4th November 2017. Police officials told the Ministry of External Affairs that Johal had been arrested as he carries a British passport.

When the Punjab Police asked Jagtar Singh's family for his passport, they didn't help out at all. They said they had handed over his passport to the British mission. The British did not hand over the passport to the Indian government but said India should approach the Foreign Office under the Mutual Legal Assistance Treaty, top sources said. Jagtar Singh runs a radical website neverforget84.com along with a relative of Gursharanbir Singh

*Harmeet Singh of the Khalistan Liberation Force, based in Pakistan had contacted him and introduced him to Gursharanbir Singh, the terror mastermind. Gursharanbir handed over charge of terror operations to Jagtar Singh once he was arrested.

* He had been in contact with terror leaders in France and Canada. he arranged for money for weapons which were hidden in a dry waterpipe in Zaffarwal village in Gurdaspur.

*He knew of the plot to kill Hindu leaders. Gursharanbir Singh had briefed him. Jagtar Singh admitted that the identity of the killers of the seven Hindu leaders was known to Dharmendra Singh Gugni, a local gangster. It was Gugni who gave the weapons to the killers.

Dharmendra Singh Gugni was arrested. He revealed during interrogation that the killer was Ramandeep Singh

Ramandeep Singh was arrested in Moga. He admitted after the arrest that he killed the Hindu leaders. He admitted the other shooter was Hardeep Singh Shera.

Hardeep Singh Shera was arrested from the Bajwa Fitness Gym, Sirhind. He has admitted to the murders

Hardeep Singh admitted that he was first motivated to kill by terror leader Harminder Singh Mintoo and then, by Gursharanbir Singh. It was Gursharanbir who arranged for the first meeting between Ramandeep and Hardeep Singh. He told them to kill the Hindu leaders.

In the past, the ISI has helped a large number of Sikh militants. They include Wadhawa Singh Babbar, Ranjeet Singh Neeta, Paramjit Singh Panjwar, Lakhbir Singh Rode, Harminder Singh, Jagtar Singh Tara and Harmeet Singh. The ISI has been doing talent-spotting when pilgrims come to Nankana Sahib from different parts of the world. The ISI has begun training Khalistani militants in Dubai, Canada, Thailand and Malaysia.

Link to the article.

The following error occurred:
Please enter a message with at least 30 characters.
D

From my experience Khalis are as rabid as Jihadis, if not more so.

dhananjay1 said:
From my experience Khalis are as rabid as Jihadis, if not more so.
Click to expand...

Sent from my vivo 1601 using Tapatalk
Click to expand...

This message is for swadesi guy's.

Just search Khalistan 2020 on twitter and you will get to know about ISI's Khalistan plans.

Articles like these have also appeared on pro Pak Army news websites like The NEWS and The NATION:::


I have noticed some suspicious fake account on twitter demanding free Khalistan. Since I use 'Singh' (Rajput) as my surname on Twitter, I have come across many such fake account asking me to unite for free khalistan (mistaking me as a sikh)
P

Those who were old enough during mid 1980s know very well that Khalistan terrorism was planned and operated from Pakistani areas like Sialkot. Paki military would train and
infilterate young Sikh boys and create bombings and killings with AK 47s.

Pakistan was emboldened due to Saudi money and American support as US was fully focused on defeating Soviet Union even at the risk of Pakis creating Al Queda and Mujahideens. Times have changed ....aim has changed...power equations have changed....Now, it is foolhardy and suicidal for Pakis to replay the 1980s script.

US is not backing Paki anymore , Saudis want to sell oil to India..And to top it all, India is becoming a powerful engine of economic and military powerhouse under PM Modi.

On the other hand, Paki is in slow motion perpetual decline mode and its capacity to cause trouble and terrorism is becoming less and less each passing day. 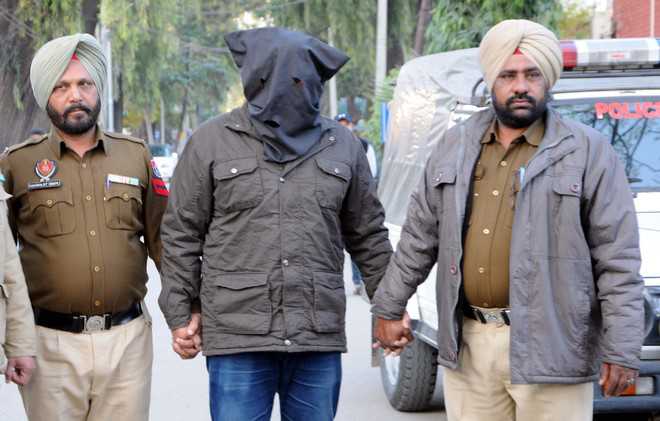 The city police today claimed to have arrested one more person in connection with the killing of Hindu Sangharsh Sena leader Vipin Sharma. He has been identified as Bikramjit Singh, alias Ghullaa, resident of the Tej Nagar area, located on the Sultanwind road here.

He was arrested from Mumbai by the Mumbai Police after his lookout notice was issued by the police. The Mumbai Police later informed the Punjab Police, which brought him on a transit remand here and produced him in a court in connection with the case. The court sent him to four-day police remand.

Deputy Commissioner of Police (Investigations) Jagmohan Singh said Bikramjit had provided his motorcycle for the crime. He said Bikramjit remained with the prime accused and notorious gangsters Saraj Singh Mintu and Shubham Singh for 25 days. He later reached Mumbai to escape to Dubai. He had already booked tickets for the same

. He said the police had also recovered the car which was used to take Shubham and Mintu out of Punjab. They reached Agra in the car, which belonged to the girlfriend of Kunwarbir Singh, alias Kammy. The DCP said her role was still being verified.

The DCP, who is also heading the special investigating team (SIT) formed by Police Commissioner SS Srivastav to probe the murder and arrest the culprits, said Bikramjit was also wanted in another fraud case in which he changed the ATM card of a resident and withdrew money fraudulently. The case was registered in September last year.

Till now the police have arrested three persons — Vishal Sharma of Shaheed Udham Singh Nagar, Kammy and Bikramjit Ghulla — in the case. Both prime accused are still absconding. 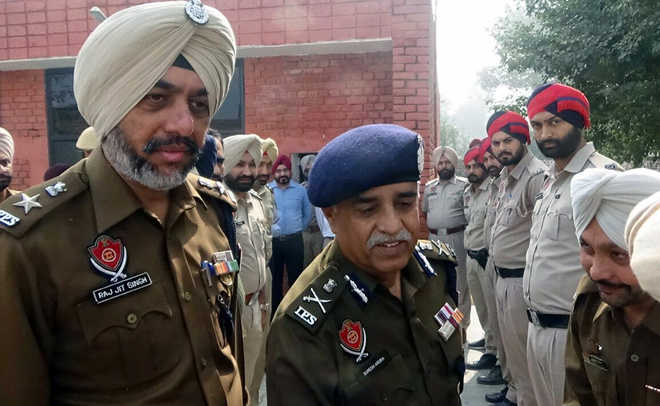 Director General of Punjab Police Suresh Arora has rewarded a team of the Moga police, who played a vital role in solving the four cases of targeted killings of Hindu leaders, with out-of-turn promotions. The names of team leaders - SSP Raj Jit Singh Hundal, SP (D) Vazir Singh, DSP (D) Sarbjit Singh and Inspector Kikkar Singh, incharge of the special cell created to nab the gangsters, did not figure on the list.

Last week, the Punjab and Haryana High Court had ordered the constitution of a special investigation team (SIT) after Hundal, fearing a frame-up, sought the handing over of a drug case probe to an officer other than Special Task Force chief Harpreet Singh Sandhu. A senior official of the Punjab Police revealed that the DGP was not empowered to give out-of-turn promotions to police officers above the rank of inspector. Therefore, the state Cabinet will look into their cases of promotion.

As many as 19 other constables have also been rewarded with a certificate of honour and Rs 1,000 cash prize. An RSS leader and BJP RTI wing member, Ravinder Gosain, was gunned down outside his house in Ludhiana on October 17, 2017, and RSS state vice-president Brig Jagdish Gagneja (retd) was shot dead in Jalandhar on August 6, 2016.

DGP Suresh Arora has rewarded a team of the Moga police for playing a vital role in solving four cases of targeted killings of Hindu leaders with out-of-turn promotions. The name of team leader SSP Raj Jit Singh Hundal, whose alleged links with a drug-tainted inspector are being probed by an SIT, is not on the list.

A special court dealing with cases registered under the NDPS Act in Sriganganagar on Friday sentenced Kuldeep Singh alias Keepa of Jhabal in Tarn Taran district to 10 years of rigorous imprisonment.

A fine of Rs 1 lakh has also been imposed on him in the case of heroin smuggling registered at the Hindumalkot police station in February 2012. The court acquitted Balwinder Singh Binda of Tarasinghwala village in the same district, giving him benefit of doubt.

Prosecution had stated that a 92 Battalion BSF patrolling party noticed some persons moving between pillar numbers 277/35 and 279/35 on February 23-24 night in 2012 near the barbed fence close to the Indo-Pak border in Hindumalkot. The soldiers resorted to firing but the suspects fled taking advantage of shrubs and darkness.

Put on high alert, the Border Security Force launched a search and noticed that six packets of heroin wrapped in yellow-coloured bags were thrown in the Indian territory from the neighboring Pakistan area. The same were seized.

The search coordinated by the Rajasthan Police next morning led to the recovery of some mufflers and other cloth pieces. The suspects reportedly abandoned two motorcycles before entering Punjab through Bakayanwala border village, the vehicles were also impounded.