Oleg Demchenko, President of JSC IRKUT Corporation, at the signing ceremony said: "We've been working for export for many years, and now started to deliver aircraft to the Motherland. 9 of our new Yak-130s are flying at the Borisoglebsk training center to date, and now we are delivering the first 2 Su-30SM fighters to the Russian Air Force. This is a historic event for our team, for the Sukhoi company and for the whole United Aircraft Corporation". 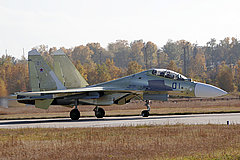 Alexander Harchevsky, Chief of the Military research and training center named after N.Zhukovski and Y.Gagarin said at the event: "Su-30SM will improve combat capabilities of the Russian Air Force". The famous military pilot, who headed the Center of retraining pilots named after V.Chkalov for many years, having experience in piloting the type of fighters mentioned such capabilities of the Su-30SM as simultaneously engage and destroy multiple targets as well as supermaneuverability. "It's very important that the aircraft is in serial production and will be supplied to the Air Force not by units, but squadrons" – stressed Maj.Gen Harchevsky.