WASHINGTON — Secretary of State Rex W. Tillerson described a landmark Iran nuclear deal as a failure on Wednesday, only hours after the State Department said Tehran was complying with its terms. But the top United States diplomat stopped short of threatening to jettison the 2015 agreement that was brokered by world powers, or saying whether the Trump administration would punish Iran with new sanctions.

The whiplash left Republicans on Capitol Hill, who had universally excoriated the agreement to limit Iran’s nuclear program and voted against its implementation, uncertain of how to respond. It architects, however, said they were cautiously optimistic that the deal would stay in place.

The nuclear deal “fails to achieve the objective of a non-nuclear Iran,” Mr. Tillerson said. “It only delays their goal of becoming a nuclear state.”

He said that Iran continued to threaten the United States and the rest of the world, and he announced that the Trump administration was reviewing ways to counter challenges posed by Tehran.

It was an attempt to clarify a State Department certification, issued shortly before a midnight deadline on Tuesday, that said Iran was complying with the nuclear agreement that also eased crippling international sanctions against the Islamic republic’s economy. During the 2016 campaign, President Trump denounced the agreement as “the worst deal ever,” and Vice President Pence promised to rip it up.

In a hastily called news conference at the State Department on Wednesday, Mr. Tillerson likened Iran to North Korea, whose nuclear weaponry and burgeoning missile technology is what the administration now believes is the gravest risk to world peace and security. Mr. Pence visited Seoul, South Korea, this week to declare that the United States was united with its allies to stem North Korea’s threat.

The Iran deal “represents the same failed approach to the past that brought us to the current imminent threat that we face from North Korea,” Mr. Tillerson told reporters. “The Trump administration has no intention of passing the buck to a future administration on Iran. The evidence is clear: Iran’s provocative actions threaten the United States, the region and the world.”

Once the National Security Council completes a review of the nuclear deal, Mr. Tillerson said, “we will meet the challenges Iran poses with clarity and conviction.”

Hours earlier, late on Tuesday night, Mr. Tillerson sent a terse letter to Speaker Paul D. Ryan pledging to evaluate whether earlier suspension of sanctions against Iran, as required under the terms of the nuclear agreement, “is vital to the national security interests of the United States.”

A man of few words, Mr. Tillerson has sometimes found that his cryptic remarks create more confusion than clarity among allies, friends and even adversaries. Earlier on Wednesday, Sean Spicer, the White House press secretary, offered little additional information about the Iran certification. He refused to say whether the Trump administration would add the Iran deal to a series of other stunning foreign policy reversals it has made by deciding to retain it instead of ripping it up or renegotiating the agreement as promised.

“I think part of the review, the interagency process, is to determine where Iran is in compliance with the deal and to make recommendations to the president on the path forward,” Mr. Spicer said.

The enigmatic remarks left top Republicans on Capitol Hill nonplused. Senator Tom Cotton, the Arkansas Republican who led congressional opposition to the Iran deal, said in a statement that the administration’s “certification is shaky, and it doesn’t mean that the intentions behind Iran’s nuclear program are benign.”

Senator Bob Corker, Republican of Tennessee and chairman of the Foreign Relations Committee, said the Trump administration appeared to be preparing a tougher line against Iran.

“Secretary Tillerson made clear that regardless of Iran’s technical compliance with the nuclear deal, the administration is under no illusion about the continued threat from Tehran and is prepared to work closely with Congress to push back,” Mr. Corker said in a statement on Wednesday.

Tuesday’s certification extends sanctions relief for Iran in exchange for continued constraints on its nuclear program. American sanctions, as approved by Congress, were suspended instead of revoked; they can be reimposed with the stroke of a presidential pen.

The Trump administration has given itself 90 days to complete its review, but it will need to make a series of decisions in coming weeks about whether to continue its support of the deal, which was also brokered with Britain, China, France, Germany and Russia. Those governments, along with representatives of the United States and Iran, will meet next week in Vienna to review the pact’s progress.

Mr. Trump faces a mid-May deadline, as imposed by Congress, to decide whether to continue the suspension of sanctions.

Backing away from the agreement would spur enormous consternation across Europe and in Moscow.

In their first congratulatory phone calls to Mr. Trump after his electoral victory, both President Vladimir V. Putin of Russia and Chancellor Angela Merkel of Germany emphasized the need to keep the Iran deal in place. And after her first meeting with Mr. Tillerson in February, Federica Mogherini, the European Union’s foreign minister, said the Trump administration pledged “to stick to the full strict implementation of the agreement in all its parts.”

Analysts and former government officials said it was unlikely the Trump administration would renounce the Iran agreement.

“I’m glad this deal has held up to this point, and I hope it continues to hold up,” said Wendy Sherman, a former under secretary of state who was deeply involved in negotiating terms of the deal during the Obama administration.

Robert Einhorn, a senior fellow at the Brookings Institution who was involved in Iran policy under President Barack Obama, said it was “pretty much a foregone conclusion” that Mr. Trump would keep the nuclear agreement in place.

Still, the administration has sought since its first days in office to ratchet up pressure on Iran. In January, before he resigned, Michael T. Flynn, then the national security adviser, walked into the White House briefing room and declared that the administration was “officially putting Iran on notice” after it launched a ballistic missile.

The Trump administration has returned the United States to closer ties with its traditional Arab friends in the Middle East, including Saudi Arabia, the United Arab Emirates and Bahrain. Part of those ties means supporting those nations, which are overwhelmingly Sunni Muslim, in their intense rivalry with Iran, a Shiite power.

By contrast, by the end of his second term, Mr. Obama had begun to view those sectarian tensions with a jaundiced eye, believing the United States should not intervene in a millennium-old religious struggle.

Earlier on Wednesday, Mr. Tillerson attended a United States-Saudi Arabia chief executive summit meeting where he declared that he was “pleased to be here today to reaffirm the very strong partnership that exists between the United States and the kingdom of Saudi Arabia.”

Mark Dubowitz, chief executive of the Foundation for Defense of Democracies, a group that sought to defeat the Iran deal, said the administration may still walk away from the agreement or renegotiate it. He contended that the administration “should not be bound by arms control agreements that are deeply flawed.”

And even Ms. Sherman shied away from predicting it will remain in place. “I’m taking this one day at a time,” she said.
V

Iran: Presidential elections on may 19, Ayatollah Ali Khamenei calls for a massive turnout in the upcoming election 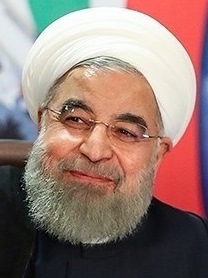 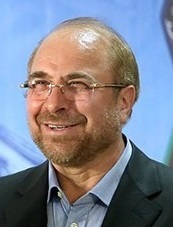 Population for Progress and Justice (PJP) 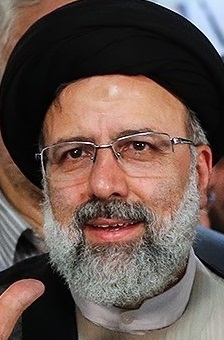 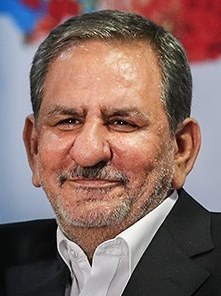 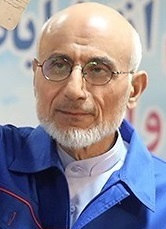 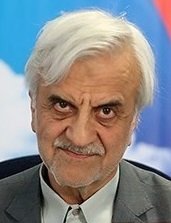 Rouhani Tells Critics Their 'Era Is Over' as Iran's Vote Nears

We want freedom,’ he says in attack on conservative opponents

President Hassan Rouhani hit out at hardline opponents after conservative-controlled newspapers filled their front pages with critical coverage of his encounter with grieving miners less than a fortnight before he seeks re-election.

We’re in these elections to “tell the extremists and those who use violence that your era is over,” he said in an election campaign speech in the western city of Hamedan on Monday. “You ran this country for eight years and the people saw what you did,” the semi-official Iranian Students’ News Agency reported him as saying.

“We want freedom,” Rouhani said, in an apparent swipe at rivals who oppose greater social liberties in the Islamic Republic. “Your rationale is one of just banning things.”

Rouhani, 68, on Sunday faced anguished miners as he visited a coal mine where an explosion last week killed more than three dozen men. Conservative news outlets seized on video footage purportedly showing the president’s car being surrounded and jumped on by men as it arrived at the mine.

His trip to the northwest was part of a nationwide push to shore up support outside of Iran’s biggest cities ahead of the May 19 vote. His leading challengers -- hardline cleric Ebrahim Raisi and conservative Tehran mayor Mohammad Baqer Qalibaf -- have attacked Rouhani’s record, in particular the delay in turning the 2015 nuclear deal into better living standards for the majority.

Both candidates have said they would respect the accord if elected but a conservative victory could undermine efforts to attract foreign investment and make relations with the West -- and especially the U.S. -- more confrontational. Oil output has recovered under the nuclear deal, the economy is growing again and rapid price gains have subsided. Yet the hoped for surge in foreign investment hasn’t happened.

‘All Our Might’
Hours later in the city of Orumiyeh, the president, a moderate cleric, addressed the mine tragedy directly. “This mine was under the control of the private sector and the management of this institution have to be answerable to the people,” Rouhani said, according to the semi-official moderate newspaper Arman. “We will stand by the people with all our strength.”

Sections of Iran’s media kept quiet about high levels of unemployment during the eight-year rule of his hardline predecessor Mahmoud Ahmadinejad, he said. “Now that we created 650,000 jobs in the past year, they start targeting unemployment and they say we have to pay taxes. But no one is asking them, who was paying taxes when you were in charge, have you even ever paid taxes?”

Rouhani then used a rally in Kermanshah to criticize censorship of one of his campaign films. References to former President Mohammad Khatami and the house arrests of two other reformist politicians were removed by the state broadcaster before the video was broadcast on Saturday.

“The people want the prohibitions to end,” Rouhani told supporters, according to his campaign’s Instagram account. “On what grounds do you prohibit a person’s picture, the picture of one of society’s elders? By what law did you do such a thing?”
V

Hassan Rouhani seems like the right choice of Iran and muslim world.
V

An Iranian Interior Ministry official says over 20 million people have cast their ballots in the country's twin elections by 5 p.m. local time (1230 GMT).

Speaking to reporters on Friday, Farhad Tajarri, the spokesman for the central committee tasked with monitoring city and village councils elections,described the turnout as "huge."

He added that the monitoring and executive committees are closely cooperating with each other and emphasized that no serious violation has been reported so far.

Iran's 12th presidential election and the 5th City and Village Councils Elections started simultaneously at 08:00 a.m. local time (0330 GMT) on Friday at some 63,500 polling stations inside the country and 310 others in 102 countries.

The Iranian Interior Ministry's Election Office announced that the voting hours have been extended to 10:00 p.m. local time (1730 GMT).

According to Iran's Interior Ministry, around 56.5 million are eligible to vote, of which 1.3 million are first timers.

Millions of Iranians are still queuing up to vote, showing strong turnout in a tight presidential contest, which pits President Rouhani against a serious challenger, Raeisi.
V

Ya'll Nibbiars Published videos, allow to estimated how a missile city looks like inside The nuclear blast hardened basing mode unveiled 3 weeks ago will likely be added to all new and existing main missile bases. 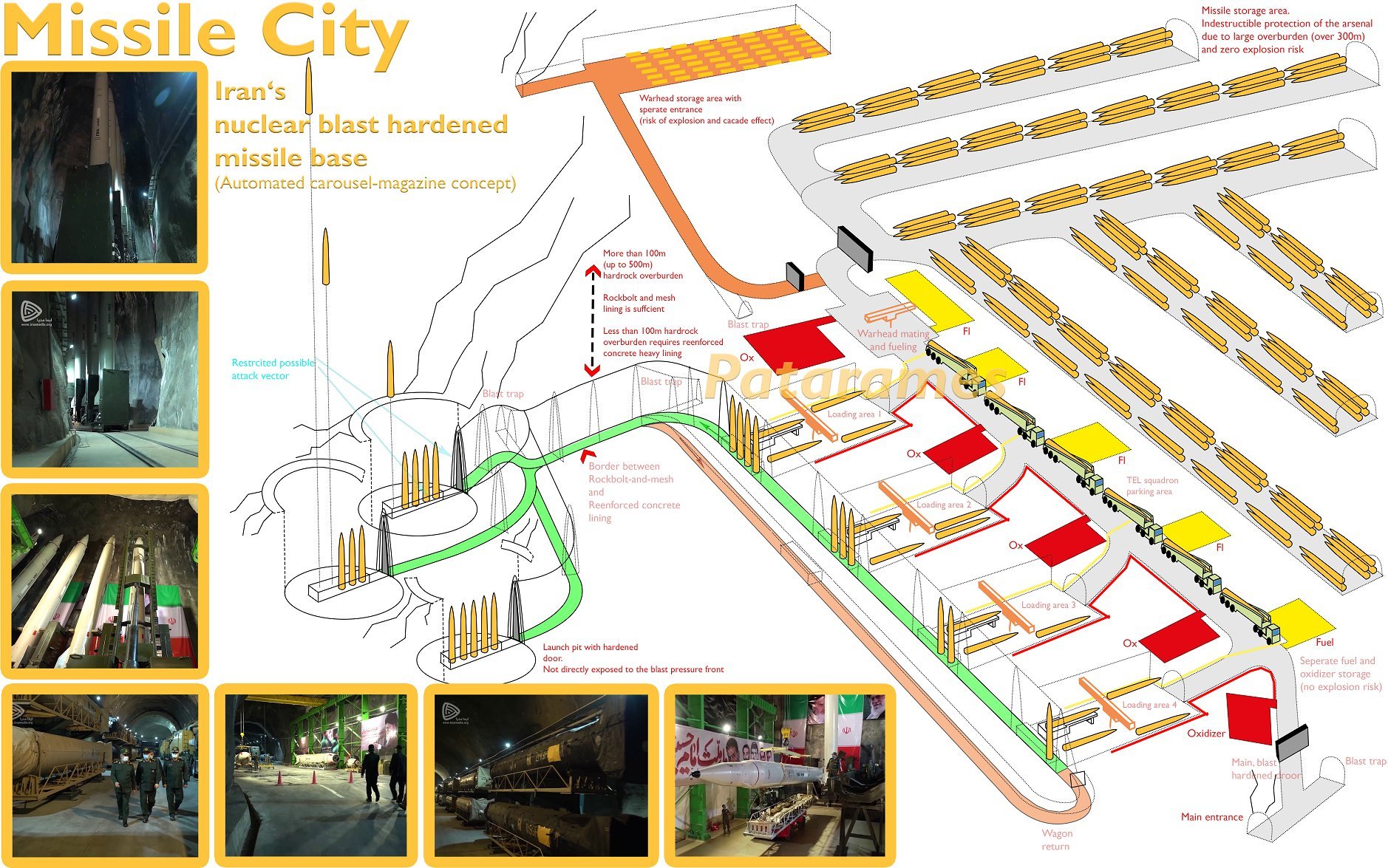 Each unit, as in the illustration, is equipped with:

many missile cities are spread around Iran.