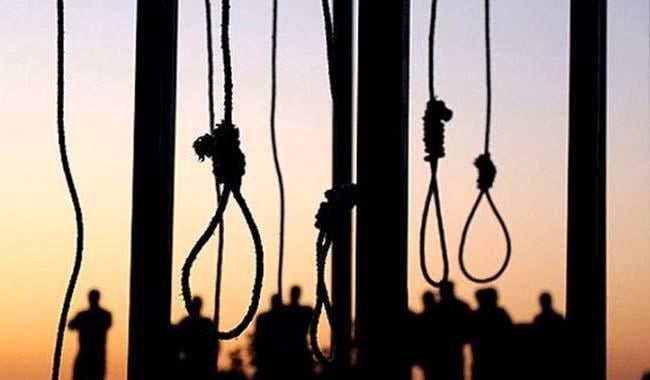 He said all the executions - carried out by hanging - happened on Tuesday.Iran's intelligence ministry on Wednesday issued a statement detailing 24 armed attacks between 2009 and 2011, including bombings and robberies, apparently by a single group.

The 'Tawhid (monotheism) and Jihad' extremist outfit were responsible for the deaths of 21 people in three western provinces in that time span, the ministry said.'102 members and followers of the Tawhid and Jihad terrorist group were identified... some of whom were killed in armed clashes with police forces and some were arrested. Some of those arrested were sentenced to death while some received prison terms,' it added.

Iranian state television broadcast what it claimed was the confessions of some members of the sunni Muslim group before the executions.Montazeri said that the convicts, some of whom had come from abroad, followed 'takfiri' ideologies, a term Shiite-majority Iran uses for describing Sunni jihadists.

Do you support killings of 20 Sunni Terrorists by your Muslim brother Iran?

Iran hates sunni, wants to cuts their nu..ni, and wants to remind them their ammi.

Sent from my SM-N900 using Tapatalk

I support Execution in rarest of rare case (The stand of Indian Judiciary). We exactly do not know what was their crime. However, this is further going to ignite the Shia sunni hater further.

In my personal opinion, Capital punishments such as hanging, electrocution etc should not only continue but also be very frequent. Because, fear of punishment (death) is vital deterrent for criminals to commit crimes. Hence, I do not favour "rarest of the rare" doctrine of Indian Judiciary.

Coming back to execution of 20 sunni terrorists, It's absolutely good news for entire world except Porkistan. Number of terrorists decreased by 20 in a single day.

I am pretty sure that a significant percentage of the terrorists executed by Iran, were Porkistani or sponsored by Porkistan.

This might as well be Iran's way of responding to what Saudi Arabia has been doing to its Shia minority.
I