Inside China's secret toxic unobtainium mine

Inside China's secret toxic unobtainium mine​
​

Last week it was reported that China - which has a global monopoly on the production of rare-earth metals - is now threatening to cut off vital supplies to the West. A shortage would jeopardise the manufacturing and development of green technologies such as wind turbines and low-energy lightbulbs. RICHARD JONES is the first Western journalist to visit the rare-earth mines in Inner Mongolia to discover why China is unwilling to give up its precious elements...


It looks like a scene from an apocalyptic science-fiction movie. High on the frozen plains of Inner Mongolia, giant trucks rumble across the floor of a lunar-like crater so vast that it looks as if it might have been gouged out by a meteorite.

As we peer down at the eerie spectacle from the crater's edge, a security guard behind us barks out in Mandarin: 'Explosives! Move away!' Seconds later, a deafening crack rings out and part of a 660ft high rock face is brought crashing down. 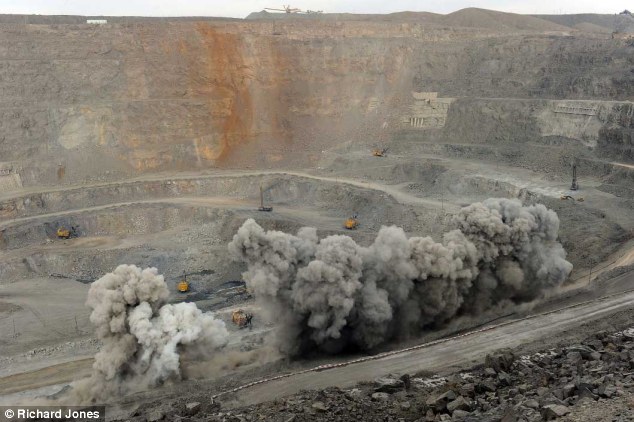 Booming business: Explosives tear down yet more rock in the vast Baiyun Obo mine​
When the dust settles, 170-ton dumper trucks close in to scoop up the rocks. They are taken to refineries where rare-earth metals - known in the mining industry as 'unobtainiums' because they are so scarce - will be extracted using boiling acid and other toxic chemicals.

This two-mile-wide crater in one of the most remote corners of China is the secretive Baiyun Obo mine. It's the world's biggest mine and the largest single source of rare-earths, the metallic elements that are driving the global revolution in green technology.

They are also used in mobile phones, computers, iPods, LCD screens, washing machines, digital cameras and X-ray machines, as well as missile guidance systems and even space rockets. Industries reliant on the rare-earths are estimated to be worth an astonishing £3trillion, or five per cent of global GDP.

I was the first Western journalist to set foot inside the mine. What I saw at Baiyun Obo and the poisoned refineries it feeds raises disturbing questions about the future we are buying into - and who will control it.

A brave worker agreed to smuggle me past tight security and the police patrolling the perimeter in four-wheel-drive vehicles to show me around the site which is run by the state-controlled Inner Mongolia Baotou Steel Rare-Earth Hi-Tech Company.

On the crater floor, Terex dumper trucks, the largest in China, towered over us as they shifted 168 tons of rare-earth rock. It's a 24-hour-a-day operation.

The rocks are full of rare-earth metals combined with iron ore, and the rare-earths are extracted as a supplementary process to the iron-ore extraction, making it the most productive source of rare-earths on the planet.

It is a source upon which the Western world has become dependent. In 2008, China supplied 139,000 tons worldwide, 97 per cent of the world's total rare-earth production.

The architect of modern China, Deng Xiaoping, realised the significance of the elements lurking in the arid wastes of Inner Mongolia almost 20 years ago when he said: 'There is oil in the Middle East but there is rare-earth in China.'

His pride is shared by mine worker Shang Liqing, who drove me to a vantage point overlooking the huge main mine.

'This isn't just the rare-earth home town of China but of the entire world,' he said.

Describing how the mining business has transformed the small town of Baiyun Obo, he explained: 'The roads here were dirt tracks only a few years ago and the workers used to live in shacks. Now they live in apartment buildings. There are no beggars in this town any more. Anyone can make money out of these rocks.'

That is why some farmers from the grasslands and plateaus surrounding the mines have given up working the land. In He Jiao, 30 miles south of Baiyun Obo, exfarmer Liu said he was earning far more money working at the mine.

'I can make much more money and easier money, too,' he boasted. 'I work nine months a year and I still make five times as much. Soon, we will leave this house and move to a new apartment I have bought.'

But the new-found wealth has come at an appalling environmental price, turning the town and the surrounding areas into a poisoned, arid wasteland littered with unregulated refineries where the rare-earths are extracted from rocks.

The crude refineries squat along the valleys north of the town, surrounded by partly frozen red-coloured 'tailing lakes' up to a square mile in size where rocks are kept before being processed.

The land is scarred with toxic runoffs from the refining process and pock-marked with craters and trenches left by the huge trucks that transport the rocks across ice and mud. Rusting machinery lies scattered along the valley floor, giving it the appearance of a war zone.

Around 100 miles south of Baiyun Obo, larger rare-earth refineries sit around the banks of the world's largest tailing lake, Baogang - seven square miles of evil-smelling toxic waste that shows the shocking extent of this industry's impact.

It is a scene that Chinese officials, and particularly those from Baotou Steel, do not want the world to see. Several villages close to the lake have already been relocated because of pollution and only minutes after we reached the lake, security guards hired by the mining company arrived to hustle us away.

At a remote processing plant called He Jiao Mu Qu, in nearby Guyan county, workers showed me around what must be one of the most toxic factory floors anywhere. They earn relatively high salaries - 1,600 yuan (£145) a month for removing rare-earth from rocks.

Inside the factory, boiling sulphuric acid flows in open trenches and boiling yellow lava spews out of kilns at the end of rotating steel pipes. The sulphur-filled air stings the eyes and burns the lungs. Workers' clothes were peppered with acid burns.

'We start out with uniforms but they soon get burnt away by the acid,' I was told by one worker whose trousers were a honeycomb of acid burns. 'They give us gloves and masks. But the masks don't do much. I have trouble breathing at the end of every 12-hour shift.'
170-ton trucks carry away the blasted rock from Baiyun Obo mine

Another worker, Guo Fu Qiang, said: 'The money is quite good. But our boss doesn't pay us anything extra for working in the summer heat or freezing winters, and none of us has accident insurance.'

A worker in an adjoining factory warehouse insisted he would never work on the factory floor, however much he was offered. 'It's suicide,' he said. 'If you work in there long enough, you will die of cancer.'

Ironically, as the environment surrounding the mines in Inner Mongolia becomes more poisoned, demand for green technology in the West is driving up demand for rare-earth metals. Worldwide consumption is expected to hit 200,000 tons a year.

China has a virtual monopoly on the market but has been cutting export quotas in each of the past three years, saying it needs rare-earths for its own increasingly hi-tech industrial output and that the West should begin to source its own.

John Kaiser, a California-based mining expert and rare-earths specialist, said: 'If the world gets really serious about green technology, it could result in a scale of demand that rare-earth suppliers would be unable to cope with.

'Low pricing from China has killed the rest of the world's ability to produce rare-earths. The mines could not compete on price. Health and safety laws [in the West] are very different, too. We know there's billions of dollars' worth in the ground outside China but it would take that much to get it out at the moment.'

China's decision to cut export quotas has already set alarm bells ringing. The United States imports all its rare-earths and more than a billion dollars' worth of goods consumed in America every year contain rare-earth elements.

'Industries are snooping all over the world for alternative supplies of rare-earths, but any new facility is going to take five to ten years to come online,' Kaiser said.

Only two new rare-earths mining projects are currently planned outside China - one in Mountain Pass, California, the other in Mount Wells, Australia. Neither, however, will be in production until at least 2014, and neither will be on the same scale as Baiyun Obo.

Although China says it needs the metals for its own developing industries, some experts believe Beijing is using the tactic of restricting supply to force manufacturers to bring their factories and technological secrets to China.

Dudley Kingsnorth, an independent rareearths marketing consultant, said: 'The Chinese will not deny the rest of the world rare-earths but the price will be that the West needs to move its manufacturing facilities to China in order to get access. Then it becomes a question of sovereign risk. Countries and manufacturers don't want to have 60 to 70 per cent of their manufacturing in one country.'

China has made clear its desire to shift from its traditional role as the 'world's workshop' with low-tech, labour-intensive factories, to more high-tech manufacturing. It may use its near-monopoly on rare-earths to make possible that leap forward.

'At the moment, China dominates rare-earths supply but only employs hundreds of workers to get it out of the ground,' Kingsnorth said. 'To refine it further, they employ thousands more workers.

'But to get real value added and produce the end products - the phones, the cars, and the hard disks - China can employ millions of people. And to support its economic growth China will need to supply 300 million jobs by 2020.'

Kaiser warned: 'It's the long term that manufacturers need to worry about. Toyota, for example, does not have a long-term guarantee of supply. If it wants to plan for the future and pump out millions of electric cars, it needs to invest in a guaranteed supply.'

It is a situation China already seems aware of. After a recent visit to Japan, where he met executives from electronics firms such as Panasonic-Si Hu, of the Baotou Rare-Earth High Tech Zone Committee, told the official China Weekly magazine that the Japanese were 'dying for rare-earths'.

In what sounded like a cruel taunt, he added: 'Without rare-earths they cannot survive. If they cannot get the raw material, they'll tear their face off.'

The supply situation may also have a more chilling aspect to it - it may allow China to exert influence over the production of missile and rocket systems in the West, says Kaiser.

'Dysprosium, for instance, allows systems to work under extreme conditions,' he explained. 'The US military doesn't want to buy it on the open market. They need a guaranteed supply and it's becoming a problem.

'If China was the only place in the world that rare-earths existed, there would be a war. There is no immediate crisis but a looming crisis that needs to be dealt with.'

That looming crisis is epitomised in the huge piles of rare-earths rocks littering the floor of the crater at the Baiyun Obo mine. 'We've got mountains of it stockpiled,' said Shang Liqing gleefully. 'There is more to come, too. Even my great-greatgrandchildren won't see the end of this mine.'

The names of some mine workers have been changed to protect their identities.
You must log in or register to reply here.
Similar threads
China's New Space Station Looks Like an Apple Store Inside
China is on the cusp of its own 'American Dream' | Business Insider
Rare look inside China's Type 041 Yuan-class AIP submarine
Brahmos with 800-km Range capable of striking deep inside China - Coming Soon
Share:
Facebook Twitter Reddit WhatsApp Link