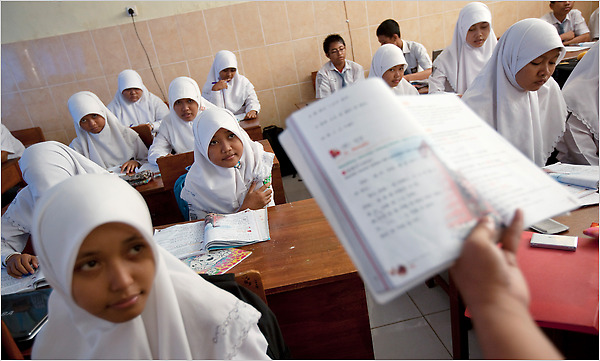 LAMONGAN, Indonesia — When the regent of this coastal rice-growing region on the island of Java first toured China as part of an official delegation, his eyes went wide. Here was the future, he thought: skyscrapers and humming factories and grand highways.

The New York Times
Officials in Lamongan want to expand economic ties with China.
Now, the regent, Masfuk, has begun trying to move his Indonesian region toward that future: he has mandated that all the schools in Lamongan, population 1.5 million, teach Mandarin Chinese to prepare the youth for doing business with China.

In classrooms here, girls in white head scarves and boys in button-down shirts are haltingly reciting from Chinese textbooks and scrawling characters on blackboards. The local government has held Mandarin speech contests the past two years.

"It's like watching kung-fu movies," Mr. Masfuk said of the wonder of hearing students speaking Mandarin during the contests. Like many Indonesians, he uses just one name.

The policy goes against decades of anti-Chinese hostility in Indonesia, which has the world's largest Muslim population. But things are changing, and the Chinese government is now sending hundreds of teachers to Indonesia, including one who has taught in Lamongan.

As China's economic power grows, the study of Mandarin is surging around the world. Its rise in Indonesia may be one of the most telling examples of how China's influence is overflowing even the steepest of barriers.

Leaders here accused China of supporting a failed Communist coup in 1965, and President Suharto banned the teaching of Chinese and all expressions of Chinese culture during his authoritarian rule, from 1967 to 1998. One Javanese man who now teaches Chinese in Lamongan had to study the language secretly in a church group in 1997.

Mr. Suharto's policies contributed to tensions between various Indonesian ethnic groups and Chinese Indonesians, who make up less than 4 percent of the population but are a powerful presence in the economy. In 1998, populist rioting over economic grievances led to the killings of about 1,000 Chinese.

The riots resulted in Mr. Suharto's resignation, and the ban on Chinese culture was lifted. The teaching of the language has gained momentum in recent years. One example: the State University of Surabaya, in Indonesia's second largest city, will start offering Mandarin this year.

Many Indonesian students of Mandarin are ethnic Chinese eager to reconnect with their culture. But there are also students of other ethnicities, like those in Lamongan, who want to capitalize on growing economic ties between Indonesia and China. The two countries did $28.4 billion of trade in 2009, and a free trade zone that took effect this year between China and Southeast Asian countries has already led to a huge trade surge, according to the Chinese Ministry of Commerce.

"I think Chinese is important for me to learn because I've heard of the free trade between China and Indonesia," said a student in Lamongan, Andresya Bargiyyatul, 16. "So I think there must be Chinese businesspeople coming to Indonesia, and I want to communicate with them."

That attitude is exactly what China has been seeking to cultivate by aggressively supporting the expansion of Mandarin programs here and in many other countries. President Hu Jintao has publicly called for China to exercise greater global influence through the spread of culture and diplomacy, or "soft power." The Ministry of Education is one instrument in that campaign — last year, it sent 4,800 teachers to about 110 countries.

Last December, the Chinese Ministry of Education opened a Confucius Institute to teach Chinese in Jakarta, the Indonesian capital. The ministry operates 554 Confucius programs — what it calls institutes and classrooms — in 90 countries and regions. The United States has the most, with 68.

The ministry sent about 380 teachers to Indonesia between 2004 and 2009, most on three-year contracts. But perhaps because of the recent anti-Chinese history, China prefers to play down any soft-power influence. In Jakarta, the Confucius Institute has done little to advertise itself, and it refused to grant this reporter an interview.

Among Indonesian officials, attitudes toward China's growth are complicated. Indonesia has had a trade deficit with China in recent years, and some officials fear China's colossal economic might. Then there are optimists like Mr. Masfuk.

"I'm looking at trade and investment between Lamongan and China, which has fantastic prospects for the future," said Mr. Masfuk, grinning broadly in his office.

Mr. Masfuk began mandating the teaching of Chinese in 2007, two years after his trip to China. The policy has become much more entrenched this school year, which began in July. Education officials here say about half of the hundreds of elementary, junior high and senior high schools in Lamongan now offer at least an extracurricular Chinese class. Many of the 148 junior and senior high schools, both public and private, have mandatory classes. The main limitation on the policy is a lack of qualified teachers and Chinese textbooks, school officials say.

The policy has won Mr. Masfuk some national fame — he was interviewed by a popular Indonesian news network and has spoken to the minister of education.

"It's a brave policy," said Mu'ad, a local education department official. "No other regency has this policy. It's a first for Indonesia."
N

"We hope 5 to 10 years from now, there will be working-age students who will be able to speak Chinese," he added. "If Chinese businesspeople or investors come to Lamongan, we hope our students will be able to explain Lamongan to them."
Enlarge This Image

Ed Wray for The New York Times
The influence of Chinese Indonesians in nearby Surabaya can be seen in stores and temples, below, and Indonesian officials hope such ties will help attract more Chinese investment.
Enlarge This Image

Ed Wray for The New York Times
Lamongan's economy grew 5.8 percent last year. Lamongan is one of the top sources of rice, fish, corn, tobacco and soybeans in East Java. Some of those products could be exported to China, officials here say, and Lamongan could build factories for Chinese companies.

"Ever since we put in place this policy, there are more investors from China coming here to talk to me," Mr. Masfuk said. He declined to give more details.

At Negeri 2, a senior high school with more than 1,000 students, Chinese became mandatory for all three grades starting this school year. On a recent morning, 30 students dressed in uniforms repeated after a teacher as he recited a phrase in Mandarin: "Every day, Monday through Friday, I attend school."

The teacher, Achmad Tontowi, has a good command of grammar and written Chinese but struggles with pronunciation. He moved here three years ago, when Mr. Masfuk first put out a call for Chinese teachers. Mr. Tontowi began studying Chinese in 1997 after learning Japanese in college. The teaching of Chinese was still banned then, and Mr. Tontowi took part in secret classes at a church in Surabaya whose congregation was mostly ethnic Chinese.

"There were about 30 to 40 students," he said. "Only four were ethnic Javanese; the rest were second- or third-generation Chinese."

One sign of how far the Indonesian government has come is its willingness to post mainland Chinese teachers across Indonesia. Officials in Lamongan asked the central government in Jakarta to send native speakers, and in November 2008 Wang Kairui arrived from China. He stayed for eight months before moving on to Aceh Province, and he has a continuing three-year contract with the Chinese Ministry of Education to teach in Indonesia.

"I think this is a really great decree," Mr. Wang, 29, said of Mr. Masfuk's policy in a telephone interview. "But they definitely have some difficulties ahead of them. They just don't have enough teachers. They don't have enough textbooks. These are all problems. It really depends on how serious they are."
You must log in or register to reply here.
Similar threads
Blasts, gunfight rock Indonesian capital Jakarta
Shuttler Prannoy wins Indonesian Masters
Indonesian spies are using Chinese electronic equipment to spy on Aus
Myanmar Muslims kill 8 Buddhists in Indonesian centre
Share:
Facebook Twitter Reddit WhatsApp Link