Jakarta: Jihadists are urging violence at a massive rally planned in Jakarta on Friday by Islamic hardliners calling for the city's Chinese Christian governor Basuki Tjahaja Purnama, widely known as Ahok, to be punished for insulting the Koran.

Former terrorist Nasir Abas, now a consultant to Indonesian police, showed a forum a photo of armed members of the Syrian-based jihadist group Jabhat Fatah al-Sham holding a sign that said: "Punish Ahok or our bullets will."

Mr Abas, once one of the most wanted jihadists in South-east Asia, warned there was a risk that both supporters of Islamic State and al-Qaeda's regional affiliate, Jemaah Islamiyah, would attend the November 4 demonstration.

"In Syria, those two groups are rivals," he said. "But in Indonesia they can be united because there is a common enemy. In their view, it is Ahok."

Authorities are bracing for the demonstration to turn ugly, with about 20,000 police and military personnel recruited from all over the country to provide security.

The Australian Department of Foreign Affairs and Trade updated its travel advice for Indonesia on Wednesday night, warning of heightened security and possible traffic congestion in central Jakarta on November 4.

A clearly spooked Indonesian President Joko Widodo is urging Muslim leaders and even his former rival in the 2014 presidential election - Prabowo Subianto - to help maintain calm and ease tensions ahead of the rally.

"The instruction says something like: 'Follow the example of the brave young man in Tangerang. Take advantage of the thousands of police deployed during the protest'," Ms Jones said.

"They are being urged to follow the example and stab people."

Ahok is being investigated by police for alleged blasphemy, after he claimed voters had been deceived by his opponents who attacked him using a verse from the Koran.

, al-Ma'ida, which some interpret as prohibiting Muslims from living under the leadership of a non-Muslim

Others say the scripture should be understood in its context - a time of war - and not interpreted literally.
Ms Jones criticised the government for allowing the situation to mushroom out of control.

"Why was there no effort to summon Ahok and/or big (Islamic) organisations such as NU (Nahdlatul Ulama) and Muhammadiyah to cool things down?" she said.

"I blame the Indonesian politicians who let the situation go this far."


She said organisations committed to jihad, including IS, were taking advantage of the protest and urging their followers to "ensure the flames of jihad are spread across the country".

The rally may have been spearheaded by the militant Islam Defenders Front (FPI) and hijacked by extremists but there are undoubtedly also political motives at play from those keen to undermine Ahok.

Senior figures from political parties supporting Anies Baswedan, another candidate in the gubernatorial election in February, are supporting the demonstration. There have also been rumours that former president Susilo Bambang Yudhoyono, whose son is also standing for governor, has been involved.

Dr Yudhoyono called a press conference on Wednesday and said it was "slander" to suggest a "certain political party" was behind the rally.

President Jokowi has spent this week scrambling to meet with Muslim leaders from NU, Muhammadiyah and the Indonesian Ulema Council (MUI).

"The three of us agreed not to encourage Muslims to participate in the protest and to stay away from the possibility of the bigger damage," said NU advisory board member Ahmad Ishomuddin, who met with the president.

"NU has told its members to stay home on November 4 and sleep."

In a bizarre photo opportunity, President Jokowi posed with Mr Prabowo on horseback - some wags called it horse diplomacy - before the former general said he agreed with the president on the need to guard against those who want to divide the country.

Politicians from Prabowo's Gerindra Party are expected to attend the rally.

Meanwhile Ahok, the man at the centre of the storm, has vowed to campaign as usual on Friday in the urban villages known as kampungs.

Ahok is normally not backwards in coming forwards. Earlier this year he told a group of visiting Australian journalists about protests by the FPI: "I tell them they should come inside [the Jakarta governor's office]. I still have a good punch!"

But for now he seems to be taking a less confrontational approach.

JAKARTA, INDONESIA —
Thousands of hard-line Muslims are expected to take to the streets Friday to protest against the governor of Jakarta, a Christian and the first ethnic Chinese in the job, over claims he insulted the Quran.

Jakarta police said dozens of social media accounts were discovered "publishing provocative statements and images" and urging people to take violent action in the name of Islam against Governor Basuki Tjahja Purnama, better known by his nickname "Ahok," including calls to kill him.

"We have seen racially and ethnically divisive statements being spread online, and there are indications many of them are anti-Chinese," said Jakarta police spokesman Awi Setiyono.

He added police were stepping up patrols and online monitoring in a "show of force" ahead of Friday's rally. 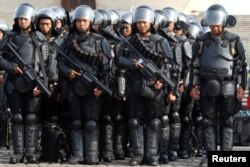 About 18,000 police and military personnel will be deployed on the day of the protest.

Critics, however, slammed Indonesia's government for doing little to contain the hard-line Muslim groups that have fueled religious and ethnic tensions ahead of next year's election for Jakarta's governor, which Ahok is contesting.

"Indonesia's spineless political leaders have allowed extremists to seize the momentum and foment religious hatred against the governor ... for more than a month without challenging the substance or methods of their arguments," security expert Sidney Jones said in an online column.

Police are investigating Ahok for alleged religious defamation, after he said his opponents had deceived voters by attacking him using a verse from the Quran. Ahok has apologized for the remarks.

A spiritual leader for the protest organizer, the Islamic Defenders Front, insisted its actions Friday would be peaceful.

"This is not anti-Christian or anti-Chinese action," Habib Riziek said.

The group has had a history of vigilante attacks against religious minorities since it was formed in 1999. It has also frequently protested against Ahok. 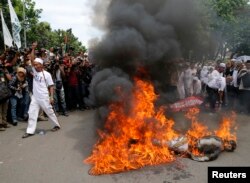 
Jakarta's first Christian governor in nearly 50 years took office despite protests from religious hard-liners opposing a non-Muslim taking over one of Indonesia's most powerful political jobs.

Indonesia's population of 250 million includes 3 million ethnic Chinese, many of whom are Christian. The community has faced persecution and violence in the past, most recently during the political and social turmoil that gripped the capital as authoritarian ruler Suharto was toppled in 1998.

Hundreds of people were killed and thousands of ethnic Chinese fled the country as mobs rampaged through Jakarta, looting and burning Chinese-owned shops and houses.

Some fear anti-Chinese sentiment and religious tensions are rising again ahead of the Jakarta governor election in February.

The government has shied away from addressing the rising tensions head on, saying instead it is committed to protecting freedom of expression and assembly alongside Indonesia's diversity.

Earlier this week, President Joko Widodo, whose ruling party backs Ahok, met with party leaders backing the two other candidates in the race, whose camps have been accused of using hard-line Muslim groups to fan tensions.

In joint statements, these political and religious leaders urged protesters to demonstrate peacefully.

"Indeed, social media is contributing to the current situation," he said. "The president has made it clear Indonesia's unity is non-negotiable."

The race to lead the sprawling capital of 10 million is often hotly contested, with top political parties jostling to get their candidates elected to a job that is seen as a steppingstone to higher political office.

Widodo served as Jakarta governor for a year and a half before running for, and winning, the presidency in 2014. His rise brought back to power the Indonesia Democratic Party of Struggle, which had spent a decade in opposition.

One of his rivals in the governor's race is the son of former President Susilo Bambang Yudhoyono.

Ahok, who took over from Widodo as governor, has gained a reputation as a tough reformer and remains a front-runner in opinion polls.

This is not the first time.

Ahok (Purnama) was even speculated as a strong candidate for presidency. But this would never happen IMO, as 1. a Christian 2. a Chinese in a 80++% muslim country (pribumi).

I once travelled across Java and then ferried to Bali Island in the end. Mosques everywhere even embarking on Bali which is Hindu dominant exceptionally. All muslim women wear Hijab. In Yogyakarta "Madarassa" and fully-covered girls (students) were found in every corner. In Ketapang the eastern tip of Java Timur the mosque is the best building in the village with loud speakers that woke me up as early as 4:00 AM maybe

Minorities seem to like Ahok and see him as a hope for clean and secular politics. A young Hindu (but atheist) in Bali told he was afraid of Bali's Hindu features being eroded (as a favoured tourist destination). In Gejarah Sion Jakarta (the oldest Catholic church) a Maluku guy complained about corruption and religious bigotry against minority. He said his aunt married a Hakka Chinese (many also Catholics) and was very impressed by Chinese commercial aptitude.

Ethnic Chinese have contributed greatly to Indonesian Independence and economy.

the earliest surviving copy of what would become the national anthem,Indonesia Raya. It was published by the Sin Po Chinese weekly on November 10, 1928, following the Second Youth Congress. (Note the Chinese characters next to the name of the publication.) Sin Po was a champion of nationalism among ethnic Chinese in the Dutch East Indies, and it was among the first press outlets to use the term "Indonesia" over "Hindia Belanda" to describe the archipelago. Publications like Sin Po helped to spread the idea of Indonesian nationalism to the masses before World War II.
Click to expand...

Chinese Indonesians are the industrialists of Indonesia.

In the 1950s, almost all retail stores in Indonesia were owned by Chinese or Chinese-Indonesians from grocery stores, hardware stores and even restaurants. Alwi Sahab, a Betawi culture expert stated that during his youth in Kwitang, Central Jakarta, the economic centre was in Jakarta fully dependent on the Chinese or Chinese Indonesian businessman.

Sadly in 1959 the President issued President Regulation No 10 which forbade foreign nationals from owning a business in Indonesia, confiscating the Chinese businesses and handing them over to Koperasi.

The New Order further oppressed the Chinese, taking advantage of their economic aptitude but eliminating their perceived dominance.
Click to expand...

I know a bit because I have relatives there. They're in textile industry, quite better off. Usually they're ready to fly to Singapore (some already with Singaporean passports) just in case...
Last edited: Nov 4, 2016

Indonesia is known for strong anti-Chinese sentiment.
........................
Additionally, Indonesians are 80-90% muslim, minorities w/o power/money have their fate sealed.
You must log in or register to reply here.
Similar threads
How Britain killed 500,000 - 3 million in Indonesia between 1965-66
INDONESIA ORDERS 6 ITALIAN FRIGATES
Will Indonesia choose French Rafale over Russian Su-35?
Indonesia and East Timor have yet to solve a maritime border issue on the Savu Sea
Share:
Facebook Twitter Reddit WhatsApp Link