The Army could soon have its first Unmanned Ground Vehicle!The first prototype of Unmanned Ground Vehicle on BMP-II vehicle platform has been developed by the Combat Vehicles Research & Development Establishment (CVRDE), Avadi, Chennai. The prototype consists of a drive-by-wire (DBW) system which includes electro-mechanical actuators and drives for the driver interfaces such as acceleration, brake, gear shifting, steering, clutch, parking brake, etc. The DBW system is controlled by a PXI-based controller in the remote vehicle and receives commands on a wireless LAN from a lab view-based GUI located in the base station.

The position feedbacks from the encoders on the steering actuators and from limit switches on the gear shift levers are obtained at the base station for accurate control. The clutching and gear shifting operations have been combined in the GUI, rendering the advantages of an automatic transmission to the conventional powerpack. Remote switching on the engine is also built in the controller. The unmanned BMP was demonstrated to Dr A Sivathanu Pillai, Distinguished Scientist on 25 May 2009. The signals from the engine, like engine RPM, vehicle speed, etc are acquired by a data acquisition card and displayed in the GUI. The electro-mechanical actuators for the BMP-II have been designed in such a way that the driver’s accessibilityto all the control pedals is not affected. The reverse effect on the actuators due to the manual override was considered during the design and selection of electro-mechanical actuators. 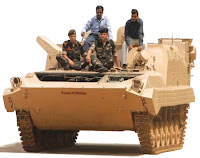 where it will find usage?

make Arjun tank as unmanned combat tank, with reduce weight and auto loader that will take day light out of enemies......

venkat said:
where it will find usage?
Click to expand...


What's interesting is that this [pretty ugly lookin] UGV replaces mechanical and hydraulic control systems with electronic control systems employing electro-mechanical actuators and man-machine interfaces that emulate pedal and steering feels. So all of the traditional hydraulic and mechanical equipment like steering column, intermediate shafts, pumps, brake boosters, coolers, fluids, hoses and master cylinders are eliminated. The electronic stability control, automatic breakers and automatic power actuators / alternators will be invaluable on gradients and slippery/asperous tracks. What is a potential disadvantage with this buggy tho is that throttle action could involve an inherent delay after the position of the accelerator pedal is adjusted, compared to a traditional cable operated throttle that generates an instantaneous response. And this is goin' to come at one hefty price tag, but as long as money is no object, I'd say welcome to the new technology!
You must log in or register to reply here.
Similar threads
Pakistani indigenously developed Strategic Unmanned Aerial Vehicles
India developing indigenous unmanned stealth bomber IUSAV
AK 203 vs P-72: Is Army Against Indigenous Weapons?
Tribal indigenous faiths systems of Northeast India
Share:
Facebook Twitter Reddit WhatsApp Link