LONDON: India has seen a whopping 211% increase in its wealth over the last 15 years — much higher than the US, UK, Japan, France, Germany or Brazil.

Only four other countries — Indonesia, China, Russia and Australia — have done better than India. Indonesia's wealth increased by 362% while China saw an increase of 341%, Russia 253% and Australia 248%.

Some of the major western countries have seen a marginal increase in their wealth over the last decade and a half. While Japan saw its wealth increase by a modest 39%, it was 41% for the US and 58% for the UK.

In India, wealth per capita increased from $900 in 2000 to $2,800 in 2015. India is now the 10th richest country in the world, ranked according to total individual wealth. "Total individual wealth" refers to the private wealth held by all the individuals in each country. The downside, however, is India and Indonesia make it to the top 20 richest list due to their large populations. On a per capita basis, the two countries are quite poor. 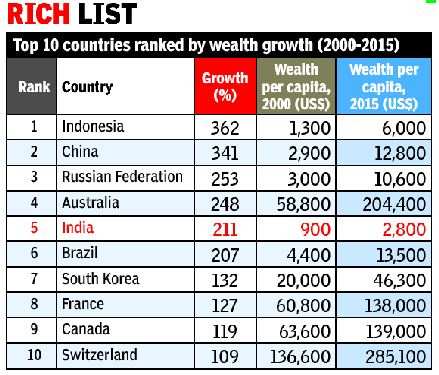 Delhi which is home to 1,350 multi-millionaires in 2014 as against 430 in 2004 — recorded an increase by 214%.
You must log in or register to reply here.
Similar threads
Corrupt Politicians and the brisk rise of their wealth
India's super rich have a combined wealth more than the GDP of UAE
Norway's $860 billion wealth fund bets big on India
China has lost its soul in the chase for wealth
Share:
Facebook Twitter Reddit WhatsApp Link