Despite the subdued economic activity and the stock market downturn the number of Indian individuals with more than Rs 1,600 crore wealth has seen a whopping 34.5 percent in 2015 over the last year, said Hurun Report.

According to the report, the combined wealth of these 296 individuals is a staggering $478 billion, which is 22 percent of India’s GDP last year. More interestingly, this is larger than the GDPs of the UAE, which stood at $402 billion, South Africa ($350 billion) and Singapore ($308 billion).

A 6 percent devaluation of the rupee against the dollar and a lackluster performance of key sectors such as steel, energy and real estate, the average wealth of the richest has declined 7 percent from the last year, the report said.

Though the number of dollar billionaires has risen to 124 from 59 in 2012, when the first such report was published, 36 billionaires have migrated overseas and haev the current status as NRIs.

Here are the key takeaways from the report in five graphics: 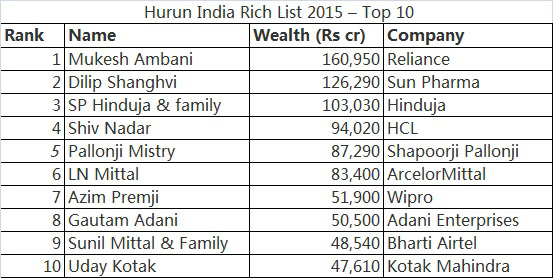 Mukesh Ambani of Reliance Industries has retained his position as the richest Indian with a fortune of Rs 1,60,951 crore, down by 3 percent from the last year, said the report.

Dilip Shanghvi (59) of Sun Pharmaceuticals too held on to his second place, though his wealth witnessed a 2 percent decline.

London-based SP Hinduja & Family of the Hinduja Group witnessed a 43 percent rise in their wealth to Rs 1,03,030 crore. They shot up to the third position, from sixth last year. Uday Kotak of the Kotak group broke into the top 10, with his wealth rising 33 percent to Rs 47,608 crore.

Terming Azim Premji of Wipro as "India’s most generous billionaire", the report said he moved down the seventh spot as he has set aside more than half of his wealth for charity by allocating an additional 18 percent stake in the company to fund philanthropy.

SP Hinduja & family is the richest NRI, with LN Mittal, with a fortune of Rs 83,360 crore, a distant second. Further below is Micky Jagtiani of the Landmark group, with a wealth of Rs 30,930 crore. According to the report, the UAE and UK are the capitals for NRIs. 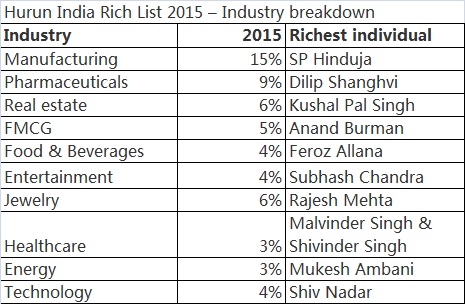 The fastest wealth growing sector is mobile phones followed by chemicals and leather products. As much as 15 percent of the richest in the list are from the manufacturing sector, followed by pharma and real estate. Other industries that have had a good year include FMCG, jewelry, food & beverage, media and entertainment.

As many as 47 individuals were from the telecom, media and technology sector. Of this, 12 hailed from Bangalore, the technology hub of India. "The fastest riser is Dhiraj Rajaram, of Mu-sigma, who rose up the list by 127 places; Rajaram registered a 490% percent growth in net worth compared to last year. The biggest fall in rank was witnessed by Shobhana Bhartia of Hindustan Times; her rank fell 115 places to 276," the report said. 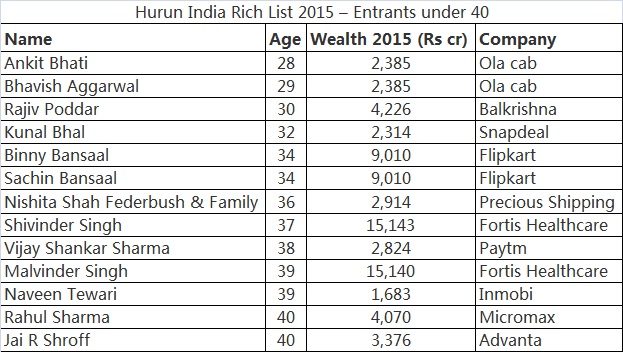 The list reflects the rise of the new age sectors in India. According to the report, e-commerce shows 48 percent spike in wealth for existing names.

Similarly, Ola Cabs founders Ankit Bhati, 28, and Bhavish Aggarwal, 29, are the youngest in the list. Both of them have a fortune of Rs 2,385 crore. Flipkart's Binny Bansaal, 34, and Sachin Bansaal, 34, With a welath of Rs 9,010 are the richest from the sun-rise sector.

Among under forty billionaires, the richest are Shivinder Singh and Malvinder Singh of Fortis Healthcare.