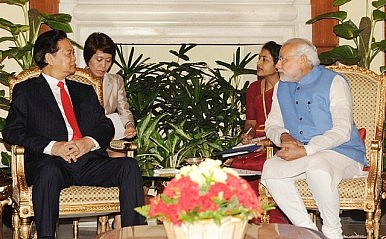 India's courtship of Vietnam is now overt. For instance, during the recent visit of the Vietnamese Prime Minster Nguyen Tan Dung, New Delhi not only laid out the red carpet for the visiting Vietnamese leader and the accompanying business delegation of 50 members, it took the decisive step of overtly acknowledging its assistance in modernizing Vietnam's armed forces, much to the chagrin of China.

Vietnam has its own difficult history with China. It is not surprising, then, that this emerging country is often seen as a linchpin in India's counter-encirclement and "Look East" policies. As a consequence, New Delhi is actively courting Vietnam with defense-related offers and infrastructure deals.

Providing impetus to these bilateral relations have been a flurry of senior-level official visits to and from Hanoi. The Vietnamese Communist Party General Secretary Nguyen Phu Trong visited India in November 2013, during which eight MoUs were signed, and Vietnam offered India seven oil blocks for exploration. India already had three Vietnamese blocks, in which the state-run ONGC Videsh (OVL) had invested about $360 million.

President Pranab Mukherjee then visited Hanoi in September this year, just ahead of Chinese President Xi Jinping's visit to India, sending a strong message of unity with the Vietnamese. During this visit seven pacts were inked along with a $100 million in credit for defense deals. This could be seen as a tit for tat with the Chinese president's subsequent visit to Sri Lanka and Maldives; a region that the Chinese have been trying to influence. The Chinese reacted sharply to Mukerjee's visit by sending a military incursion into Chumar sector on September 15 – the day the deals were signed.

The bilateral bonhomie was again on display during Dung's recent visit to India. For the first time India openly acknowledged modernizing Vietnam's armed forces and enhancing its maritime capacity. In addition, India was one of the few countries to continue expanding its energy exploration in South China Sea waters that are claimed by China.

"Our defence cooperation with Vietnam is among our most important ones. India remains committed to the modernization of Vietnam's defence and security forces. This will include expansion of our training programme, which is already very substantial, joint-exercises and cooperation in defence equipment. We will quickly operationalise the $100 million line of credit that will enable Vietnam [to] acquire new naval vessels from India."

Given the need to keen an eye on Chinese movements in this volatile region, India is keen to have basing rights in Vietnamese ports such as Na Trang for its naval warships. This would not only help give India a presence in the region, it would also serve as a quid pro quo for the increasingly frequent Chinese forays into the Indian Ocean Rim (IOR). While the forward base in Na Trang has not yet been made available, Indian naval warships are extended special privileges when berthing at any Vietnamese port.


When the Indian warship Airavat was challenged by the People's Liberation Army Navy in September 2012 while on passage from Vietnam, it reinforced the need for India to enhance maritime cooperation and interoperability with the Vietnamese. That opportunity for developing interoperability has presented itself again, with the Vietnamese having taken delivery of the first of six Russian-made 636 Kilo-class submarines on order.

In the very near future Vietnam will have a fleet of submarines requiring skilled submariners to man these sophisticated platforms. The Indian Navy has stepped in and begun training a large number of Vietnamese sailors in submarine operations and underwater warfare. The ongoing "comprehensive underwater combat operations" training for these Vietnamese sailors is in progress at the Indian Navy's INS Satavahana (Submarine School) in Visakhapatnam.

The Indian Navy's experience since the mid 1980s in operating Russian Kilo-class submarines will undoubtedly help in this effort. In the past, India had supplied spare parts for the Russian-origin Petya-class warships and OSA-II class missile boats of the Vietnamese Navy, while from continuing to train its military personnel in information technology and English language skills.

This development is likely to perturb Beijing, and it will also be closely watched by Pakistan. It may prove to be the impetus that prompts China to consider giving Pakistan a nuclear submarine, which would raise the security stakes for India considerably.

Apart from submarine training, India also plans to train Vietnamese Air Force Sukhoi pilots, while Vietnam has also been negotiating to acquire the supersonic anti-ship cruise missile BrahMos, which is built jointly in India with Russia.

This ongoing strategic game of chess underscores the importance of India and Vietnam to each other. While China continues to make inroads into Sri Lanka and other Indian neighbors, India is returning the favor with growing support for Vietnamese capacity building.

Dr. P K Ghosh is a Senior Fellow at the Observer Research Foundation. He is the former co-chair of the CSCAP International Study Group on Maritime security and has been closely following the South China Sea dispute.