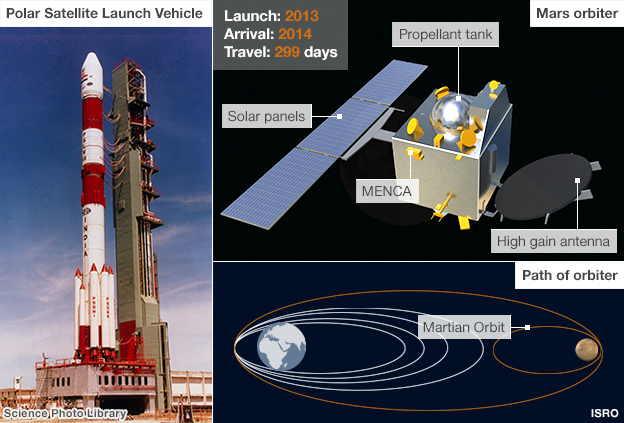 India is preparing to send a robotic spacecraft into orbit around Mars - a first for the country. The BBC's Asia Business Report spoke to K Radhakrishnan, chair of the Indian Space Research Organisation (Isro) - the country's space agency - about his hopes for the mission.

Q: What is the objective of India's Mars mission?
A: Essentially in this Mars mission, which we are planning, the prime objective is to demonstrate India's capability to capture the Martian orbit and then to conduct a few meaningful scientific experiments.

Q: And what are you hoping to find?
A: See, essentially when we talk about Mars and exploration of Mars, you look at life as one of those goals. So (we look for) the presence of methane in the Martian environment and see whether this methane, if it is there, has a biological origin or a geological origin. We also would like to study the Martian atmosphere and the escape processes there.

Q: Nasa's Curiosity rover has not been able to find methane. Has that in any way dented your hopes of finding it?
A: No, see Curiosity is measuring the presence of methane in a small area where it is there today. We are talking about the entire Martian environment. So Curiosity saying "no" is not a point to be worried about.

Q: So, when the spacecraft takes off from the east coast of India, what exactly will it do and how long is it expected to take?
A: Any mission to Mars has to be done in an opportune window and the imminent window is November 2013, that is we need to get out of this sphere of influence of earth by 30 November to ensure that we have the minimum distance between Earth and Mars.

Now we are launching this Mars orbiter from Sriharikota in the east coast of India in the first week of November and then the PSLV-XL (Polar Satellite Launch Vehicle) is used for the launch which will put this orbiter into an elliptical orbit around the Earth... then around the last week of November, we have a crucial operation, it's called the "trans-Martian injection" where the spacecraft is directed towards Mars.

Then it is a long voyage of 300 days where the orbiter spacecraft passes through the sphere of influence of the Earth... Then it goes through a long phase of heliocentric flight where the orbiter spacecraft will be influenced not only by the Sun but by the other planets too. Then as it approaches Mars... we have another major action: capturing the orbit of Mars, which is on 21st of September 2014.

Q: After that how long will it take to get the readings or get the data that you are hoping to get from there? How long will it take after September 2012?
A: Soon after the orbiter is put into the orbit of Mars, we would start the experimentation and even before this orbiter reaches the Martian environment we would be calibrating these instruments as it travels from Earth to Mars. But the most important part of it is looking at the distances involved. It takes at least 20 minutes for any signal to come from the Mars orbiter to Earth in some phases. It could be anything between four to 20 minutes one-way.

Q: Any launch by India's space organisation is greeted with a lot of excitement and a lot of pride. But there is also criticism when the country is facing an economic slowdown. It has problems with power shortages and it faces high levels of poverty and malnutrition. How would you react to this?
A: Why India has to be in the space programme is a question that has been asked over the last 50 years. The answer then, now and in the future will be: "it is for finding solutions to the problems of man and society." And in this area, India has become a role model for the whole world. Let me talk in terms of numbers.

We spend in India about a billion dollars for the space programme. If we look at the central government expenditure, we spend 0.34% of its budget for the space programme. This goes primarily for building satellites in communications and remote sensing and navigation for space applications. Nearly 35% of it goes on launch vehicle development and about 7-8% goes on the science and exploration programme. So the Mars mission we're talking about today is part of that 8% of the 0.34% of Indian central government expenditure. And if you look at the benefit that the country has accrued over the years, it has surpassed the money that has been spent in terms of tangible and intangible benefits.

[This can be expressed in terms of] the advantage that the people have got, the fishermen have got, the farmers have got, the government bodies have got for informed decision-making, the support the country has got for disaster management and by providing a communication infrastructure for this country using the INSAT satellites. Today we have nearly 10 communication satellites and 10 remote sensing satellites in orbit. This is a great revolution that has taken place over these last 50 years in the country by a meagre expenditure that has been put into the space programme.

Q: Now, India is planning a second moon-mission (following Chandrayaan-1, which was launched in 2008). This one would have a rover land on the surface of the Moon. What progress has there been on that?
A: See, Chandrayaan-1 was an orbiter, but Chandrayaan-2 as you said looks at the surface of the Moon using a rover and a landing module there. In 2009-2010, we planned this as a joint mission where India was to provide the launch and the orbiter and Russia was to provide the lander and the rover.

Over these years there has been a programmatic realignment on this and, as of now, the plan is that the rover will be made by India and the lander will also be developed by India, and we must have this lander developed by the year 2016. Now, we also require a reliable GSLV (Geosynchronous Satellite Launch Vehicle rocket) for launching Chandrayaan-2.

In December 2013, we are going to launch the GSLV T5 rocket with our own cryogenic engine stage. If that is successful, and we are able to have one more successful flight of the GSLV, then we would be ready - from the launch angle - for Chandrayaan-2. So, this is the scenario emerging and there will be scientific experiments in the lander module and in the rover, and a few in the orbiter too.

Q: So if you were to put a time to it, would you say 2016?
Yes, 2016 is the correct target and the limiting factor for that is the development of the lander module.

Q: How close is India to sending a human into space?
A: See, as of now we have no declared programme on human space flight, but in the year 2006-07 we began a study... and as of now we have taken up the critical new technologies that India needs to master a human space flight. The core module development, environment control and life support systems, the crew escape system, these are all part of that and we are working on it at the moment. But we require a human-rated vehicle that is capable of taking the crew module into a lower orbit. So you need to have a reliable GSLV for a manned mission or a GSLV Mark 3 developed and then manned-rated.

Q: So you're working towards it but don't have any timeline?
A: As of now, there is no timeline for a mission but we are working on the development of the critical technologies required for it.

Q: There's talk of a space race between China and India. It's been 10 years since China sent a human into space. A lot of analysts say that it's decades beyond where India is. How would you respond to that?
A: Let me first say each country has its own priorities and focus. Right from the beginning, right from the early sixties, India's focus has been on peaceful uses of outer space and space applications and there India is today a role model for the whole world. One can be proud of it. China has its own priorities and it is moving in that direction.

So, we are not in a race with anybody, but I would say we are in a race with ourselves. We need to excel, we need to improve, and we need to bring new services. We need to do it more cost-effectively and deliver it to the target audience in the country, whether it is to the people or the government or other agencies in the country. So that has been the focus of the Indian space programme.