How Xiaomi's IPO Will Impact Its Operations In India

Billed as the world’s largest tech listing since Alibaba’s IPO in 2014, Xiaomi raised $4.7 billion at a valuation of about $54 billion, just over half of the $100 billion that it was said to be targeting earlier in the year. The company’s billionaire founder Lei Jun had gone to great lengths to convince investors that his company was well on its way to moving beyond making devices with slim profit margins to expand into the potentially much more profitable business of offering online services.

Xiaomi has already said that it plans to invest 90% of the IPO’s proceeds split equally between funding its hardware research and development, financing its global expansion and building its internet ecosystem for its connected devices.

Although Xiaomi has failed to keep pace with its rivals in its home market of China, the capital it just raised should allow it to bolster its position as the best-selling smartphone vendor in India, while expanding its portfolio of products and internet services. 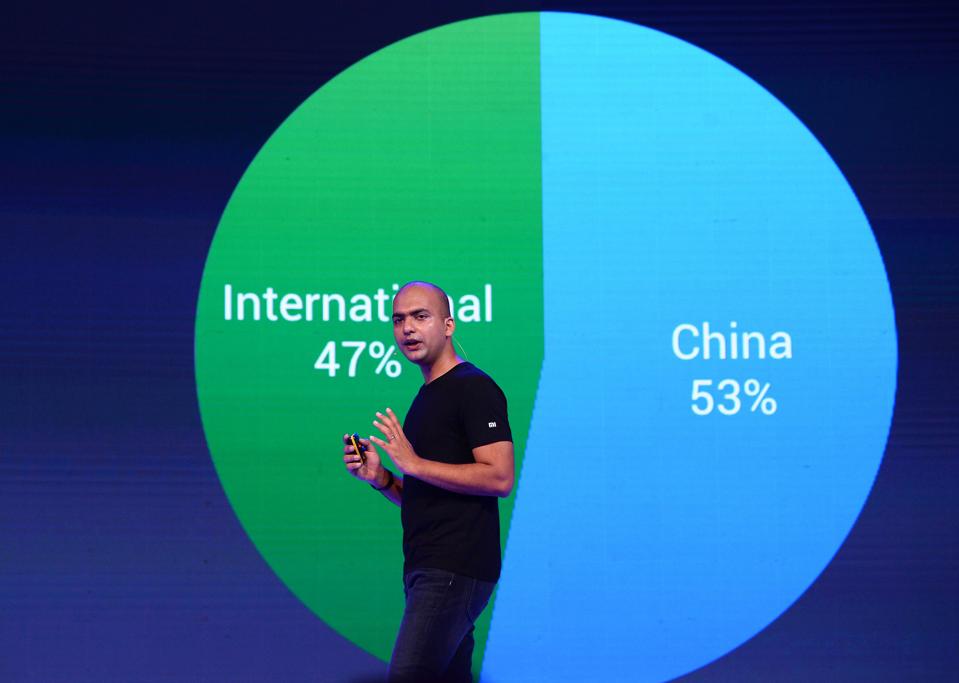 Manu Jain, managing director of Xiaomi India, speaks during the launch of the Xiaomi Mi A1 smartphone in New Delhi on Sept. 5, 2017. (Sajjad Hussain/AFP/Getty Images)

Xiaomi said in early April that it would ramp up production in India of printed circuit board assembly (PCBA) units, which account for about 50% of the value of handsets. Earlier that same month, the government there had announced a 10% tax on imports of some smartphone components, which had included printed circuit boards. Xiaomi's plan is to manufacture the PCBAs at a plant already operating in Chennai and build three more smartphone plants in partnership with Foxconn in Andhra Pradesh and Tamil Nadu, allowing the company to keep down the costs of the phones it produces for India's price-sensitive market.


Xiaomi was India's top seller of smartphones through e-commerce in the fourth quarter of 2017 with a 57% market share, and came in second in offline sales with an 11.2% share of that market in the same period, according to market research consultancy IDC. As the company had previously said that its online sales are expected to come down from 95% in 2016 to nearly 70% by 2020, Xiaomi's plan is to use its available capital to continue expanding its network of shops in India. Xiaomi India Managing Director Manu Jain said the company will add to its presence in 15 new cities, with plans to open 100 exclusive brick-and-mortar stores called, Mi Homes, around the country.

Jain has also publicly stated that to maintain this leadership position in the Indian smartphone market, Xiaomi will invest $1 billion in 100 startups from the country over the next five years, particularly in the software and mobile tech space. Until last year, it had purchased stakes in six Indian internet companies, including Hungama and KrazyBee, through its sister company Shunwei Capital. The smartphone brand has a pattern of making investments to keep customers loyal to its handsets by providing unique features and content, such as innovative themes, ringtones, regional language options (Tamil, Telugu, Marathi, etc.), music and movie services on its devices.

Moving into other product categories

Xiaomi also has plans to diversify in India by selling electric vehicles, laptops, televisions, and lifestyle products like robot vacuum cleaners, air purifiers and health products. "Everything that we have in China is not suitable for [the] India market…the company will use feedback from customers on these products to understand the level of customization required before launching some of them in India," said Manu Jain in a press statement.

“Chinese companies like Xiaomi are betting on similarities amongst the two countries [India and China] as they can easily implement past learnings and experience in their home country to become India’s market leaders in varied segments,” said Krishna G. Palepu, a senior associate dean at the Harvard Business School, at a talk in New Delhi this February.
You must log in or register to reply here.
Similar threads
Provoking India will lead to Military action : Navy Chief Admiral to China
Huge phone scam targeting Americans leads to 700 being detained in India
UN chief urges India to take lead role on Afghan security
India will lead drive to increase regional trade, says Modi
Share:
Facebook Twitter Reddit WhatsApp Link