NEW DELHI -- India is beginning to bounce back from the global financial crisis. But the IMF has warned that large capital inflows from foreign institutional investors could disrupt this recovery. An analysis of policy options proposed in a recent IMF report reveals, however, that past methods of dealing with FII inflows are inadequate and that market-based capital controls may be the only sufficient response. According to the recent IMF publication the World Economic Outlook, India's GDP growth rate may leap from 5.7% to 8.8% between 2009-2010. This is even higher than the most optimistic projections by the Indian finance ministry.

Less encouraging, however, is the IMF's simultaneously released Global Financial Stability Report (GFSR) in which policy response options are suggested for dealing with capital inflow surges from advanced countries in emerging economies.

While the global economic recovery has been better than anticipated, the IMF identifies two risks: one that affects advanced countries and the other emerging economies. The sovereign risk crisis, which has already erupted in Europe is also threatening other advanced countries with high fiscal deficits and rising debt levels. Emerging economies experiencing a high-speed growth recovery are receiving, once again, large capital inflows from advanced countries that undertook huge liquidity expansion in response to the financial crisis. This has led to a rise in the prices of both goods and assets in emerging economies, besides exerting upward pressure on their exchange rates. The impact on India is particularly significant. 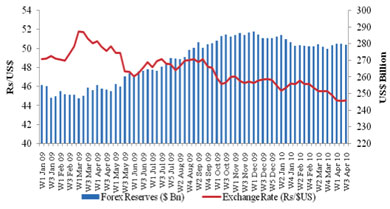 Charts 1 and 2 reveal what is happening in India right now. Chart 1 shows that from March 2009, FIIs resumed pouring money into Indian stock markets. This has pulled up stock market prices, although they have not touched pre-crisis levels yet. Chart 2 shows that the rupee has been appreciating against the dollar since March 2009 with the central bank having virtually stopped buying dollars (in net terms) since October 2009. Both these trends spell trouble for the Indian economy.

The policy responses recommended by the IMF to mitigate the risks arising from capital inflow surges in emerging economies include:

--A flexible exchange rate allowing appreciation of the currency

--Tightening of fiscal policy to allow for lower interest rates

None of these options are adequate for addressing India's current predicament. The first option means allowing the rupee to appreciate. Two factors weigh against taking this option. First, India's current account deficit in 2009-10, which is estimated to be about 4% of GDP, is the highest current account deficit since Independence. Second, the rupee has already appreciated by about 12% against the dollar over the past year ending April 2010 (the appreciation is higher at 18% in the year ending March 2009, in real effective terms against a 6-currency trade-weighted basket). A further appreciation of the rupee will therefore considerably erode India's external competitiveness.

Buying excess dollars, as recommended by the second option, will mean that liquidity is injected into the system. Given the high inflation rate in India, this is a flawed response. India has previously resorted to sterilized intervention, but the fiscal costs of such intervention will not be affordable now as India begins its fiscal consolidation. Additionally, sterilization could keep interest rates high, and that may attract more capital flows.

The IMF also recommends a reduction in interest rates. India is in the mode of monetary tightening to contain inflation, which is exceptionally high and rising, so interest rates must rise.

The fourth option, fiscal tightening, is also unsound. This has already begun but, since monetary tightening will continue for some time it is unlikely to reduce interest rates enough to dissuade capital inflows.

The last option from the IMF report is to relax capital outflow controls. India has been liberalizing its capital outflows and has gradually lifted the cap on capital outflows from both resident individuals and corporate entities. While further relaxations are possible, the impact will be limited in the present situation of a fragile global economic recovery.

India's situation is more complex now than during earlier episodes of capital inflow surges. Interestingly, the IMF states in its GFSR that if its policy options appear insufficient to meet with the sudden or large increase in capital inflows, "capital controls may be a useful element in the policy toolkit." This is a break from IMF's long-held position and is based on an in-depth study of the experience of a number of emerging market cases.

Price or market-based capital controls, on the other hand, discourage capital transactions by increasing their cost. There are two kinds of market-based capital controls that emerging economies take recourse to: unremunerated reserve requirements and taxes on capital inflows. The former was used by Colombia (2007-08) and Thailand (2006-08) in the pre-crisis period and the latter by Brazil in 2008 and again from October 2009.

So far, India has relied largely on administrative controls to tackle a surge in capital inflows. These include controls on both debt and equity inflows. Debt inflows are subject to limits. In the case of equity inflows, while there is no overall limit imposed on the amount, a cap in terms of their proportion to a company's share capital is imposed. However, if FII equity inflows continue to be excessive, the authorities may need to seriously consider a move to price-based controls. Given the serious flaws in other available options, imposing an unremunerated reserve requirement or a tax on FIIs may be the only viable way forward.