India's Bid Continues To Be Under Consideration of NSG: Government

India's Bid Continues To Be Under Consideration of NSG: Government

NEW DELHI: India's membership continues to be under consideration of the NSG and government was engaging with all members of the 48-nation grouping for an early decision on country's application, Minister of State for External Affairs V K Singh said today.

Noting that the recent Nuclear Suppliers Group (NSG) Plenary meeting in Seoul (June 23-24) concluded without a decision on India's membership, Singh said the broad sentiment within the NSG was to take this matter forward.

At the Plenary, China and some other countries had opposed entry of a non-NPT signatory into NSG.

Replying to a written question in Rajya Sabha, the minister also said that engagement was stepped up with China before the Seoul NSG Plenary.

"India's membership continues to be under consideration of the NSG. The merits of India's candidature have been recognised by a majority of the NSG members, including in formal bilateral Joint Statements. It is for the NSG to judge the merits of other candidates," Singh said.

He said government continues its engagement with the NSG participating government including China on the issue of India's membership of the NSG.

"India's membership has been supported by a large and diverse number of NSG members, including the US, France, UK, Russia, Canada, Australia, Germany, Netherlands and Japan. It is natural for India to move ahead on this issue by working with as broad a group of supporters as possible," Singh added.

Department of Atomic Energy has been actively associated with government's efforts on India's membership bid, he said.

As the PM said we will be on both the sides.

And that will be the new definition of Non Alignment.

Second, being on both the sides India can't be a 'pivot' in any region for any of them.

Third, getting NSG for non-align India won't be an issue for any of them.


The government will once again focus on its push for India’s membership of the Nuclear Suppliers Group (NSG) this week with the three-day visit of New Zealand Prime Minister John Key from Monday. Negotiators, meanwhile, are gearing up for the second round of talks with China followed by an NSG session in Vienna — expected in November.


New Zealand is among the countries led by China that have demanded a set criteria for non-signatories of the nuclear Non-Proliferation Treaty (NPT), holding up India’s membership, and the issue will be discussed when Mr. Key meets Prime Minister Narendra Modi on Tuesday, officials said. 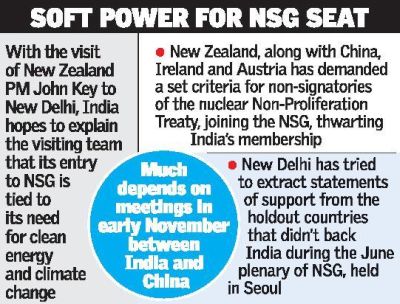 “We will tell New Zealand [PM Key] why membership of Nuclear Suppliers Group is important for India,” External Affairs Ministry spokesperson Vikas Swarup said ahead of the visit. He said India’s entry to the group was tied to its need for clean energy and climate change commitments.
However, ahead of the next round of NSG talks in Vienna to discuss the issue of India’s membership, it is clear that the membership has become a prestige issue for New Delhi. The government has attempted to extract statements of support from each of the “holdout” countries that did not back India during the June plenary in Seoul, where New Delhi’s bid failed.


“There are still four or five countries that have not budged on their stand since June, and New Zealand is among those,” a western diplomat tracking the negotiations told The Hindu, indicating that apart from China, countries such as Ireland, Austria, New Zealand and members of the ‘New Agenda for coalition’ that takes a hard line on the NPT, are still the sticking point.

Meanwhile, Prime Minister Narendra Modi has sought, but not received, outright declarations of support from two other members of the coalition —South Africa and Brazil — at last week’s BRICS summit in Goa.
After meeting Brazilian President Michel Temer, the India-Brazil joint statement said, “The Indian side conveyed its aspirations for membership of the Nuclear Suppliers Group (NSG). The Brazilian side indicated that it would work with India and other participating governments of the NSG in that direction.”

Earlier, during a visit to Pretoria in July, Mr. Modi had “thanked” South Africa for its support at the NSG, but South Africa made no statement on the subject, and there was no reference to the NSG during the Prime Minister’s meeting with President Zuma in the official readout at the BRICS
summit.

NPT Conditions
One of the reasons for the silence is that both Brazil and South Africa fought hard and domestically controversial battles to join the NSG, and could only do so after they agreed to sign the Non-Proliferation Treaty. Therefore, they have resisted full-fledged membership for India without it signing the NPT, or a formal procedure being set. Significantly, in 2008, both Brazil and South Africa had backed India’s bid for an NSG waiver, as part of the IBSA grouping.

Much depends on meetings expected in early November at the second round of direct talks between Indian and Chinese negotiators that was announced by Mr. Modi and President Xi after their meeting in Goa. According to a senior MEA official, the meeting will take place “before the NSG meeting in November”.

Meanwhile U.S. officials have said they will make “all efforts” to resolve India’s NSG status by the end of this year, although given the U.S. election, ensuring all the fence-sitters over whom Washington has influence will vote in favor of India, maybe more difficult.

In an interview to The Hindu, U.S. Ambassador Richard Verma said of India’s NSG chances, “Sometimes in international diplomacy, these are tough slogs, but I am optimistic. I don’t quite know the date of when we will get there, but we will get there.”

NSG fails to move on India’s membership for the second year Berne plenary ends without much movement, but promises an informal meet in November

The Annual plenary meeting of the Nuclear Suppliers Group (NSG) in the Swiss capital of Berne (July 22-23) ended without agreeing on India’s case for a membership, for a second year, although member states agreed to convene another meeting on the subject of non-signatories to the Non Proliferation Treaty, like India and Pakistan, in another five months.

According to a public statement issued on Friday night by the 48-member body, that holds all consultations in secret, and takes decisions by consensus, “The NSG had discussions on the issue of ‘Technical, Legal and Political Aspects of the Participation of non-NPT States in the NSG’. The Group decided to continue its discussion and noted the intention of the Chair to organise an informal meeting in November.”

The announcement of the November date denoted “progress”, an Indian official said on Saturday, while the NSG also noted India’s special relationship with the group owing to the nuclear waiver India won in 2008 to conduct nuclear business and the NSA said the Berne plenary had “continued to consider all aspects of the implementation of the 2008 Statement on Civil Nuclear Cooperation with India and discussed the NSG relationship with India.”

The “technical, legal and political aspects” phrase in the NSG statement is part of a process decided on in 2016, when India and Pakistan had both formally applied for membership to build criteria for admitting non-NPT members. India would prefer to see a “case-by-case” basis membership process employed, given it has an impeccable record on nuclear transparency compared to Pakistan, who is accused of nuclear smuggling. At the end of the plenary session in 2016, the NSG Chairperson had appointed Argentine diplomat Rafael Grossi to oversee the process of building a consensus on the issue, but it is unclear if he will continue to lead that effort this year.

India has blamed China for being the “one country” stopping the NSG from a consensus, and although other members are understood to have expressed their concerns on a non-inclusive process, China has been prominent in objecting publicly, leading most experts to conclude the process won’t be resolved quickly.

“[The NSG issue] is now part of the growing list of intractables with China, and there is not enough to permit a give and take,” said the former Prime Minister’s nuclear envoy, Rakesh Sood, when asked whether the stand-off would continue.

The continuing strain in India-China relations has dimmed prospects of any consensus coming quickly, given that other countries are wary of intervening on India’s behalf, said others.

“The U.S. and western countries are not prepared to confront China on this issue at this time. The U.S. needs China to help deal with the Korean nuclear programme and Indian NSG membership is not a current priority. So [membership] is likely to be a long haul but we should insist that it remains on the NSG agenda,” said former Foreign Secretary and Chairman of the National Security Advisory Board Shyam Saran.

Notwithstanding reported attempts by New Delhi to ask Washington and Moscow to do more of the “heavy lifting” for India, and Prime Minister Narendra Modi’s meeting with the Chinese President at the SCO summit in Astana on June 9, the Chinese Ministry of Foreign Affairs repeated on Friday that there was “no change to China’s position”, on the admission of non-Non Proliferation Treaty states.

I don't know why this is a surprise at all.

China has and will try to scuttle any means for India to progress.

The problem is that our lazy and useless public and babus are all too happy to let them get away with it.

Imagine if Chinese products were boycotted en masse, babus banned Huawei and ZTE and other communication companies the way Australia, UK have done. China would definitely feel the pinch. But even Arnab's Republic TV plays China phone ads 24/7. Our people are too lazy, too indifferent, and too complacent on a large scale to take collective action.

Chinese communication and IT companies are a serious threat to our infrastructure and must not be allowed to sell in India - especially when it comes to enterprises and government.
You must log in or register to reply here.
Similar threads
China stays firm, but other countries may back India’s NSG bid
India, China to discuss 'friction points' like Masood Azhar and NSG bid in first Strategic Dialogue
Congressional resolution introduced backing India’s UNSC bid
India Foils Colgate-Palmolive Bid to Patent Nutmeg Mouthwash
Share:
Facebook Twitter Reddit WhatsApp Link