these are the Tremendous inspiration for kids! Its a lot better to gift your children with these comics, than those of Phantoms, Mandrax, et al. For they would not only be inspired by the real life stories of real life heroes, they would also gain a strong sense of nationalism & natonal pride in the long term! Is this not something that is missing at present amongst our urban youth.
and i would even like members to contribute.

Comic starts adventure to find war heroes
The Army in India has been losing recruits to the flourishing private sector, but a new war comic hopes to inspire a revival

As the son of a general in the Indian Army, Aditya Bakshi grew up on a steady diet of second-hand Commando war comics that lionised the plucky British Tommy's heroic feats against Johnny Foreigner.

Now, aged 28, he is publishing the first Indian version of the black-and-white cartoons in an attempt to celebrate India's own war heroes and to update the image of the world's second-largest standing army.

Mr Bakshi and the military top brass also hope that the bi-monthly Indian War Comics will help to stem a brain drain to the private sector that has left the Army short of 11,200 officers. The first issue, which will go on sale in two weeks, is called My Heart Wants More! and tells the tale of Vikram Batra, a real-life army captain who died in the country's conflict with Pakistan in 1999 over the Kargil Heights in Kashmir.

"The point is to increase the visibility of the Army and promote the ethics of patriotism, self-sacrifice, honour and bravado," Mr Bakshi, a navigation officer in the Merchant Navy, told The Times.

, with 1.1 million active troops and 1.2 million in reserve, and a military career was once considered to be one of the most respectable and lucrative on offer. It faces a shortfall of officers because middle-class young men are being drawn towards the burgeoning information technology, banking, retail and media sectors.

They are also put off by the bloody insurgencies in Kashmir and the restive northeast, and by a recent spate of suicides and corruption scandals within the Army. Last month the National Defence Academy revealed that it had filled only 190 of the 300 places on its three-year training course. The Indian Military Academy — another top officer training college — had filled just 86 of its 250 places. Worse still, of the Army's depleted officer corps of 32,000, almost 3,000 officers had resigned or sought premature retirement since 2004 - including 1,095 in the past year.

Last month General Deepak Kapoor, the army chief, asked the Government to double army pay and suggested that it may have to consider introducing conscription for the first time. "The Government and the services cannot compete in matters of salary and perks with the corporate world," he said. Starting salaries in leading Indian corporations are more than double the wage of 9,000 rupees (Â£115) a month for a junior officer.

Colonel Sakhuja, an army spokesman, said that the military was not involved officially in the comics — although it was providing information about war heroes. "Everything which helps to recruit more officers is always welcome," he said. He added that the Army had taken several steps to improve recruitment - including a glitzy new advertising campaign.

Mr Bakshi's comic is based closely on Commando, which was first published in 1961 and is still printed today. The Indian version will be sold online as well as in shops for 50 rupees per issue. The text is written by Mr Bakshi, while the illustrations are by Pradeep Yadav, a 19-year-old student at the Delhi College of Art.

hi friends you can help me gathering some more of India War comics.
Thanks in advance for your effort.


i couldnt find more, comical videos heros from the history
Last edited by a moderator: May 10, 2015

Shivaji Maharaj - The Attack On Shahistekhan

There are lot of comics are available in indian force . The first edition for this comic is in a black and white this comic is provide a lot of information of india's past history . It is tremendous inspiration for Kids and youngsters also . There are lots of books are available on website you also purchase from on line book shop . It really good to read this type of comics.

The cover of the Maj Unnikrishnan comic book 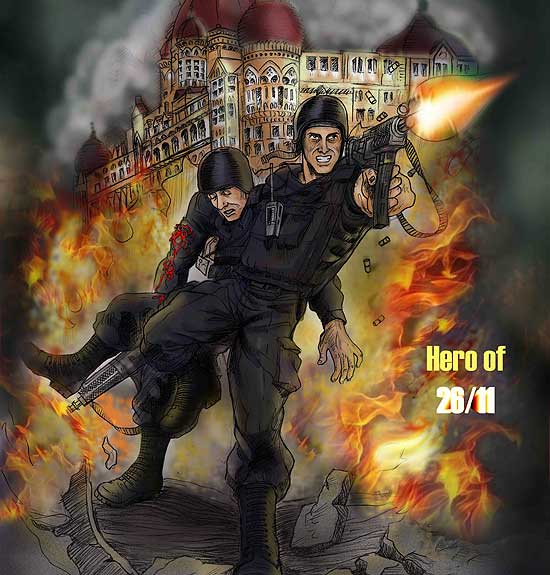 Bullets don't bounce off their chests. Nor do they have superhuman powers to unleash webs or hoist themselves into the air, voluminous capes and all. What they do have is extraordinary courage. Meet the heroes of the Indian War Comics, a series that began in '08 with a comic on Kargil martyr Capt Vikram Batra. The third one, commemorating Maj Sandeep Unnikrishnan of 26/11 fame, will be released on Independence Day. If the cover is any indication—a fiery-eyed Maj Unnikrishnan aiming his rifle at the enemy against the backdrop of a burning Taj Mahal Hotel, all the while supporting his injured colleague—the portrayal of the protagonist will fit snugly into the superhero mould, though it will also dwell on his early life and influences.

It was 'Yeh Dil Maange More', Capt Batra's famous rallying cry on the icy heights of Kargil, that inspired the series creator, Aditya Bakshi, to immortalise India's military heroes through speech bubbles. A merchant navy officer and a general's son, reared on dog-eared Commando comics, Aditya found himself moved to tears after a chat with his father about Capt Batra, who died at the age of 24. "There was a lot of material available on him, but only in the regimental format of historical accounts, which would hardly appeal to children. I wanted to make these heroes known to the widest possible audience, and in a more permanent way than the odd TV programme." So, armed with a pencil, Aditya began to give shape to his idea, even doing the early drawings himself. Later, the realisation that the text he was penning needed professionally executed visuals sent him off to the Delhi College of Art with an 'artist wanted' poster. A student, Pradeep Yadav, came forward and Yeh Dil Maange More, the first black-and-white Indian War Comic—82 pages long, priced at Rs 65 and merging facts and imagination with gusto—was born. While it is public knowledge that Capt Batra single-handedly overpowered five enemy soldiers, approaching their bunker from the back after a perilous climb, the comic drew upon all the resources of the genre to illustrate how it was done—with a little creative licence thrown in. For instance, it has Capt Batra shout out the lines: "Yes, it's raining bullets and perhaps we die. But what more worthy death can one hope for? Come on men, this is what we dreamed of...to die a soldier's death and live forever." It even has a bit role for journalist Barkha Dutt, who interviewed Capt Batra at Kargil.

Encouraged by the fact that a few thousand readers actually bought the comic, distributed by Om Books International, Aditya went on to launch his second comic, the True Maratha, on Ashok Chakra-winning Col N.J. Nair, who ignored his eventually fatal wounds to lead from the front and break an ambush by Naga insurgents. Two more are in the pipeline—on Param Vir Chakra winner Capt Bana Singh, the only one of the heroes who's still alive, and on Ashok Chakra awardee Commando Sanjog Chhetri.

So is there a readership out there warming to the idea of an Indian genre of war comics, despite the stiff competition from Marvel and DC comics, and innumerable computer and video games? Says Amit Vig of Om Books International, "The popularity of these comics is rising." He points out that the Capt Batra comic, of which 10,000 copies were initially printed, will go into reprint soon, and the one on Maj Unnikrishnan will also, he believes, cross the 10,000-copy mark.

Aditya, who has been making the rounds of schools to popularise his comics, claims a growing interest in this genre among school children. Kanika Mehra, a teacher at the Delhi Public School, Noida, seems to agree. The comics, she says, "offer an engaging perspective on war history", while her student, viiith grader Shivansh Tyagi, concedes it is a format that appeals to him. A serving army general, who didn't want to be named, also registered approval, but for different reasons: "These comics offer exemplars that children would want to emulate. It helps at a time when we're losing recruits to other lucrative jobs."

If it's inspiration that's needed, the comics offer it by the bucketloads. Indeed, they overdo it at times. The second comic book, for instance, shows Col Nair charging forth against a hail of bullets, as his word balloon reads: "Come on my brave Marathas. Soldiers of Shivaji. Let's give it back to them."

Aditya concedes that the treatment is stylised, even exaggerated, but argues that it's necessary in order to sell the comics to children fed on a diet of TV and video games. To his credit, he has taken some trouble to make his comics authentic, even if each carries a disclaimer of being an unofficial account. Most of the battle sequences can be traced to an official document or statement, a family member, an eyewitness or simply an open source. Maj Unnikrishnan's father, K. Unnikrishnan was given a questionnaire to fill up, and Capt Batra's father gathered information and anecdotes from his son's school and army units and even provided two letters written by him to his brother Vishal. "I get emotional when I read the comic," says his father, G.L. Batra.

Unnikrishnan's father, on the other hand, was initially hesitant about the idea of having his son featured as the protagonist of a comic book. He does not, he told Outlook, want his son painted in the colours of a war hero: "I see him as someone only doing his job, and that's how Sandeep felt too". But he eventually warmed to Aditya's project because he felt it could help spread awareness of the ideals of patriotism and the value of dedicating one's life to one's chosen vocation. The release of the comic on August 15 also chimes well with this bereaved father's own project—to cycle all the way from India Gate to the Gateway of India, reaching Mumbai on 26/11.

Comic titan Stan Lee and his POW! Entertainment will introduce Chakra – The Invincible, an original superhero for the Indian market, in conjunction with New Delhi's Liquid Comics. According to The Hollywood Reporter, the comic centers on Raju Rai, a Mumbai teen tech wiz, who develops an enhanced suit that activates mystical powers.

The plan is to introduce Chakra – The Invincible as a series of downloadable web and mobile comics distributed throughout India on Liquid's recently announced Graphic India platform. Lee's first digital comic book story on Chakra will be released for free in April 2012, exclusively on Graphic India - India's Premiere Webcomic and Pop-Culture Portal though a preview of concept art will be available later this week on the website. 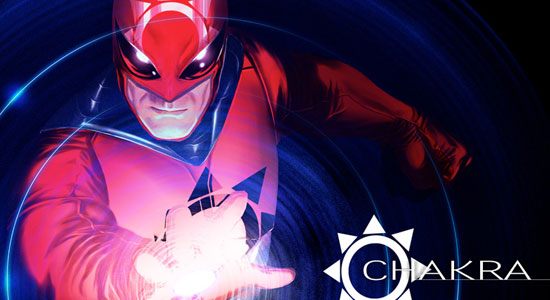 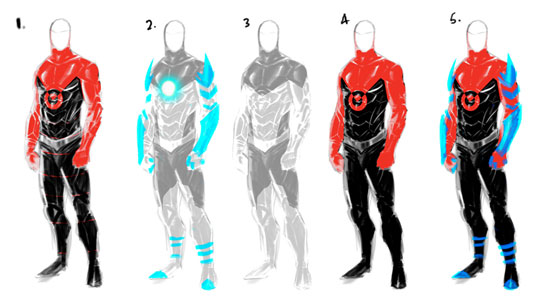 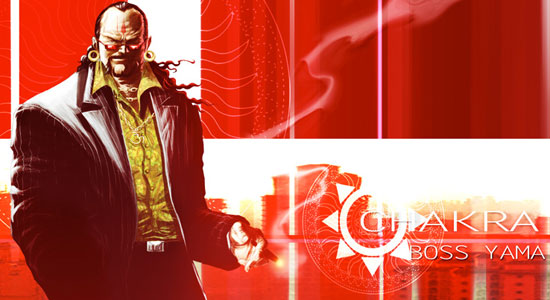 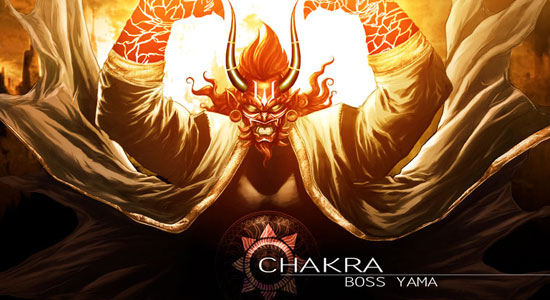 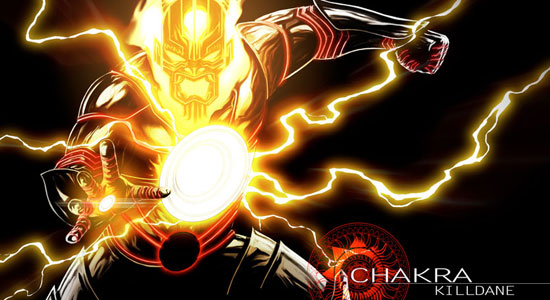 I have read comics on Vikram Batra. It is pretty good to read. 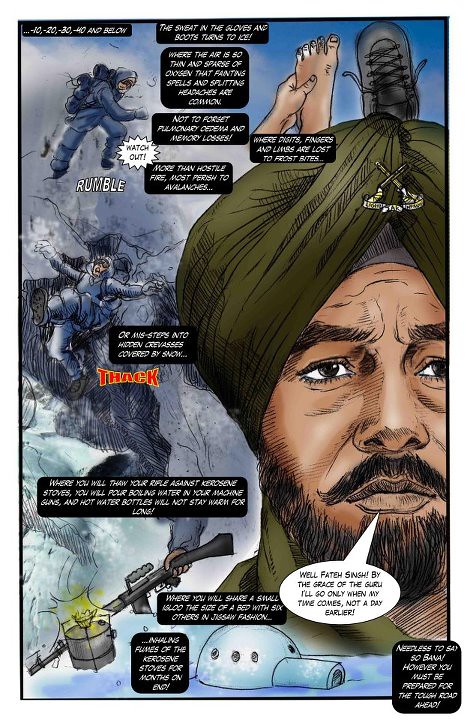 Capt Bana Singh's introduction to Siachen by a fellow soldier... 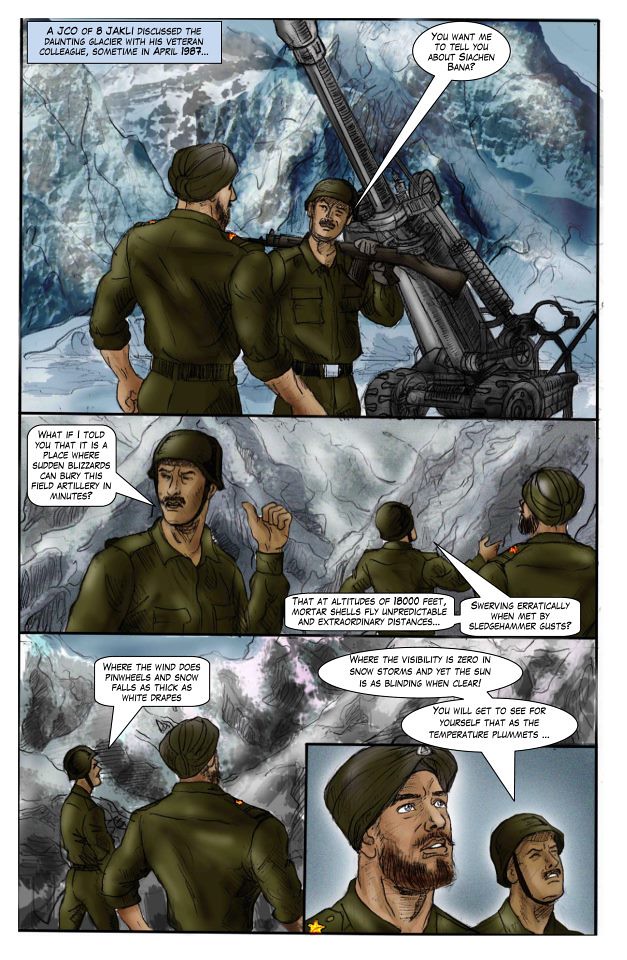 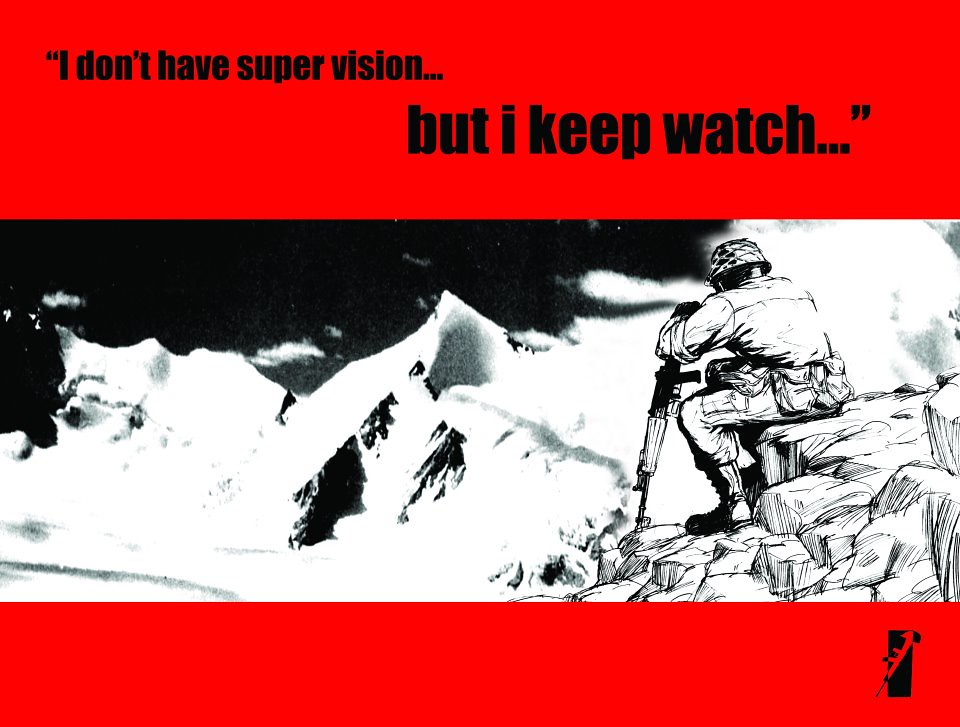 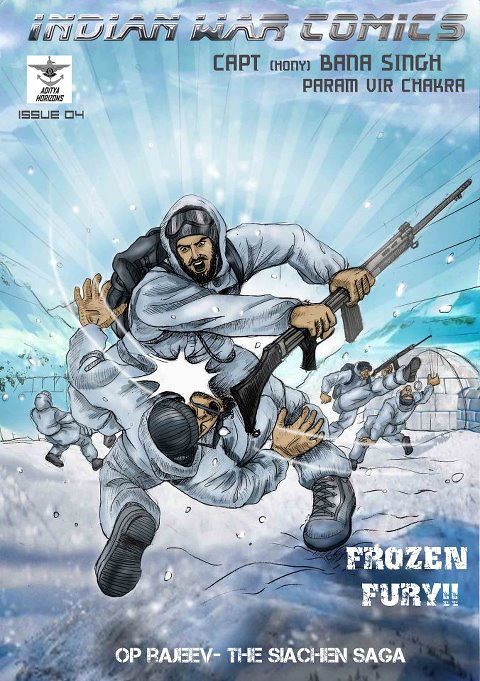 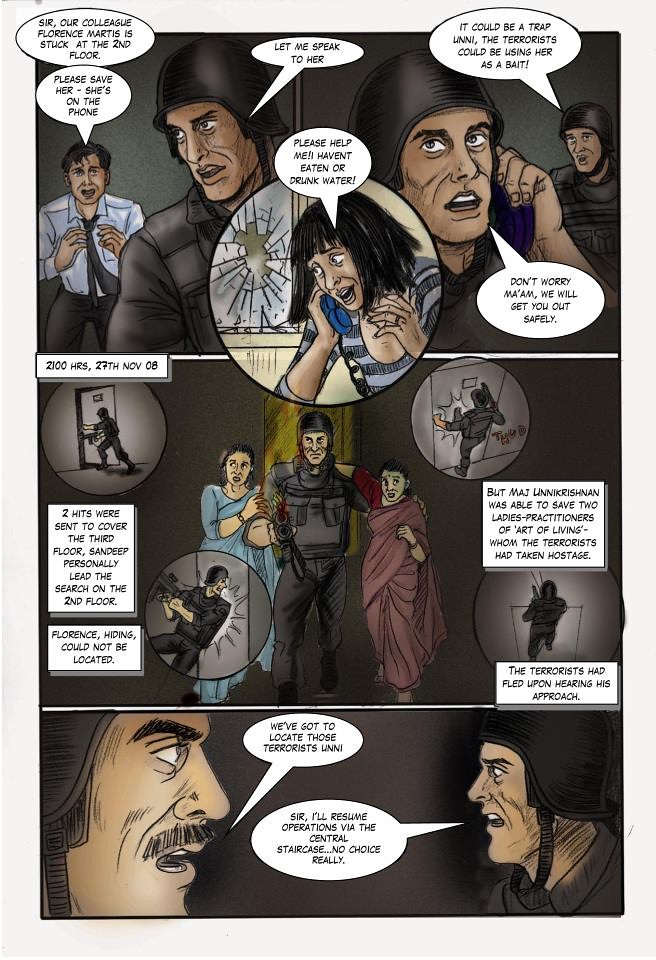